UK businesses will have to show that their products and supply lines are free from illegal deforestation, under government plans.

A proposed law would require larger companies operating in the UK to show where commodities such as cocoa, soy, rubber and palm oil originated from.

It would be illegal to use products that fail to comply with laws to protect nature in those origin nations.

Critics though say the plan is flawed and lacks detail on penalties.

There has been growing dissatisfaction among consumers about products that are connected to illegal deforestation, especially in the Amazon.

According to a new survey from environmental group, WWF, 67% of British consumers want the government to do more to tackle the issue.

Some 81% of respondents in the survey said there should be greater transparency about the origins of products that are imported into the UK.

Fuelling these concerns are reports showing that deforestation in the Amazon has increased sharply this year.

The felling of trees and the clearing of land, usually for agriculture, is responsible for 11% of global greenhouse gas emissions. 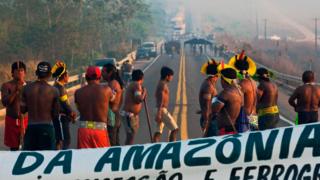 The vast majority of it is illegal.

The UK government now says it wants to address this issue by introducing a law to ensure that the supply chains of larger companies and the products they sell are free from illegal deforestation.

Companies would have to ensure that commodities such as palm and soy were produced in line with local laws protecting forests and other natural ecosystems.

Businesses would have to publish information showing the origins of products or face fines.

“There is a hugely important connection between the products we buy and their wider environmental footprint, which is why the government is consulting today on new measures that would make it illegal for businesses in the UK to use commodities that are not grown in accordance with local laws,” said international environment minister Lord Goldsmith.

“Ahead of hosting the UN climate change conference next year, the UK has a duty to lead the way in combating the biodiversity and nature crisis now upon us.”

The plans for a new law were given a cautious welcome by some environmental campaigners.

“This consultation is a welcome first step in the fight to tackle the loss of our planet’s irreplaceable natural wonders such as the Amazon and in the pursuit of supply chains free from products that contribute to deforestation,” said Ruth Chambers, from the Greener UK coalition.

“The evidence linking deforestation with climate change, biodiversity loss and the spread of zoonotic diseases is compelling. A new law is an important part of the solution and is urgently needed.

But others argued that the proposal was flawed and did nothing tackle demand.

“Proactively, the UK government and industry needs to support a just transition at home and in forest regions to food systems that work with nature, including the restoration of natural ecosystems.”

As the host of the delayed climate conference, COP26, the UK is under pressure to show international leadership on climate issues.

Deforestation is one of the key issues where the government hopes to see progress made on the international stage.

In June, ministers committed an £16m in funding to help scale up environmentally friendly farming and forest conservation in the Amazon.

Details of the consultation on the proposed new law can be found here. It will run for six weeks.