Nostradamus is widely regarded as the world’s leading authority on prophecy and predictions, even 454 years after his death. The French mystic and writer published during his lifetime (1503 ro 1566) collections of cryptic predictions many believe have accurately warned us of the future. Nostradamus’s followers claim he correctly predicted the rise of Adolf Hitler to power in 1933, the coronavirus pandemic and the Great Fire of London in 1666 – but what did he have to say about 2021?

Michele de Nostredame, better known as Nostradamus, penned his prophecies in the form of four-lined poems or quatrains.

The bulk of his work was published not long before his death, in his 1555 magnum opus Les Propheties.

The writings have been poured over in a bid to glean some hints about what will happen in the future.

Some of his predictions that are yet to pass include supposed warnings of World War 3, natural cataclysms and possibly even Brexit.

Craig Hamilton-Parker, a leading British psychic and medium who runs Psychics.co.uk has also shared with Epxress.co.uk some of his own predictions for the new year, which you can read below. 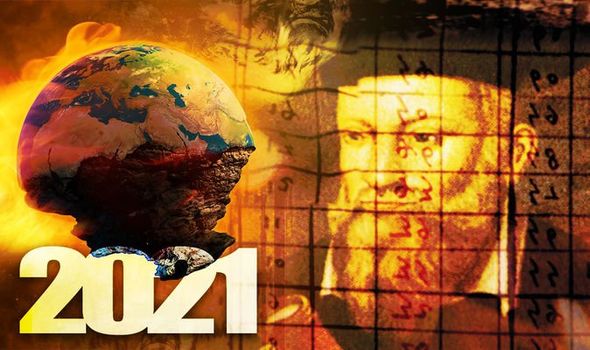 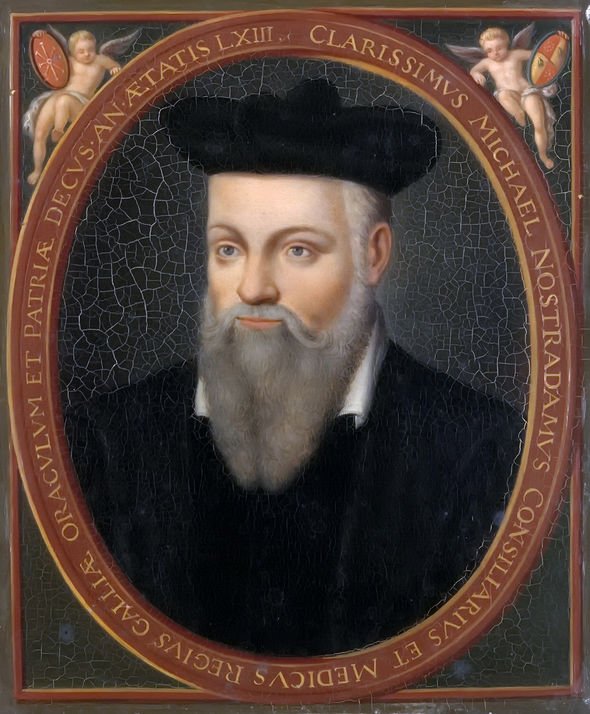 1. The outbreak of World War 3

The year 2020 has been a very tough sell for most people across the globe with the coronavirus pandemic, civil unrest and the looming threat of climate change.

But if Nostradamus’s followers are to be believed, his most feared prophecies about the outbreak of global war are yet to pass. Will 2021 be the year this happens?

Nostradamus is said to have warned us of a war between the East and the West in one of his quatrains.

In Century VIII, Quatrain 59, he wrote: “Twice put up and twice cast down,

“the East will also weaken the West.

“Its adversary after several battles

“chased by sea will fail at time of need.”

Is this a reference to World War 3, or something else entirely?

Our planet has been spared the effects of a powerful solar event since 1859.

Then, a powerful solar flare and geomagnetic storm known as the Carrington Event struck the planet, burning out telegraph wires and creating auroras so powerful many people thought nighttime had turned into day.

If such an event repeated in our modern-day world, the effects would likely be catastrophic on our infrastructure, power grids and communication.

The Earth was spared another Carrington-level event in 2012 when the Sun released a powerful Coronal Mass Ejection (CME) in the Earth’s direction.

Daniel Baker of the University of Colorado said at the time: “If it had hit, we would still be picking up the pieces.” 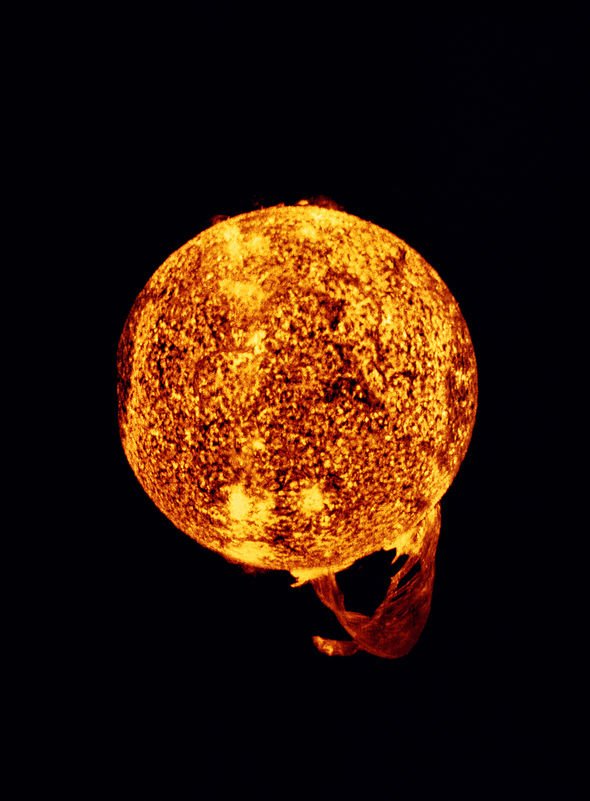 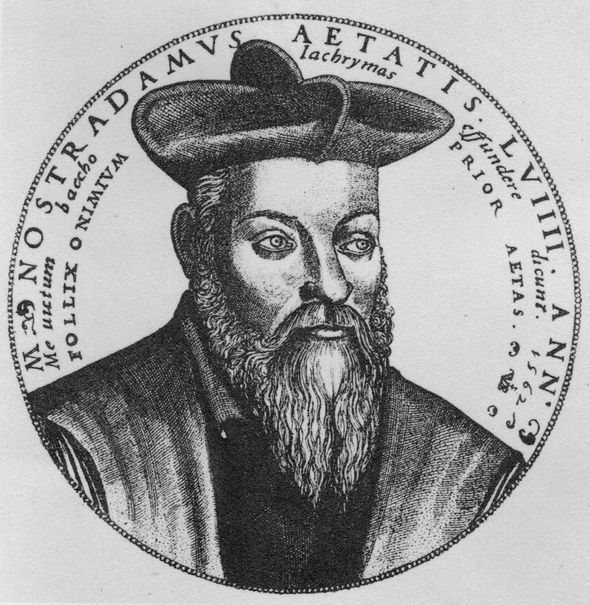 But if claims about Nostradamus’s writings are true, the mystic may have warned of a powerful solar flare hitting the planet.

Century VIII, Quatrain 2, reads: “Condom and Auch and around Mirande,

“I see fire from the sky which encompasses them.

“Sun and Mars conjoined in Leo, then at Marmande,

“lightning, great hail, a wall falls into the Garonne.”

Another of Nostradamus’s passage is also believed to contain a warning about natural cataclysms including global sea levels rising.

Century VI, Quatrain 20 reads: “Peace and plenty for a long time the place will praise:

“Throughout his realm the fleur-de-lis deserted:

“Bodies dead by water, land one will bring there,

“Vainly awaiting the good fortune to be buried there.”

3. Brexit and UK’s withdrawal from the European Union

Among the more bizarre claims, is the notion Nostradamus foretold Britain’s exit from the European Union.

Nostradamus supposedly knew this would happen and wrote about it in Century I, Quatrain 33.

The passage reads: “Peace and plenty for a long time the place will praise:

“Throughout his realm the fleur-de-lis deserted:

“Bodies dead by water, land one will bring there,

“Vainly awaiting the good fortune to be buried there.”

Mr Hamilton-Parker has also made his predictions about Brexit and the UK’s future outside of the EU.

The UK will finally sever its link to the economic bloc on December 31 when the Brexit transition period ends.

After that, Mr Hamilton-Parker predicts the economy will take a hit but will bounce back in a fairly short amount of time.

He said: “Britain will become a world leader in Quantum Computing and Artificial Intelligence. 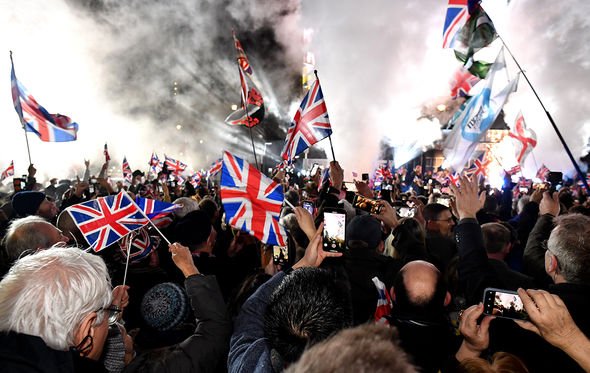 “This will be spearheaded by targeted government investment into the intelligence services and the military.

“A giant car factory will be built specialising entirely in electric vehicles and wind power turbines.

“New factories will be built in Oxford for the production of pharmaceuticals, vaccines and insulin.

“Free trade zones will be created to attract companies such as Facebook, Google and Amazon.”

The psychic has also told Express.co.uk of a new virus that will emerge in China in 2021.

The new virus will not have any links to the coronavirus and it will take a while before its origin is exposed.

“It will mutate into other less dangerous forms that do not require a vaccine.

“Pockets of the virus will persist in remote places such as Siberia and the Amazon.”

Should you believe in Nostradamus predictions?

Nostradamus has established a strong following in the years after his death but there is no credible evidence to back his claims.

Sceptics argue Nostradamus’s writings are fallaciously interpreted and skewed to fit events after they have already happened.

According to Brian Dunning, the author of the Skeptoid podcast, not a single Nostradamus prophecy or prediction has truly come to pass.

He said: “Michel de Nostredame was truly one of the brilliant lights of his day, but to subscribe to false stories and urban legends is to disrespect who the man actually was.

“Appreciate his contributions to medicine and Renaissance literature, and don’t trivialize his good works in favour of a pretended history of paranormal magical powers.”