Offshore wind farms built to provide clean energy to the UK could be the ‘final nail in the coffin’ for more than 1,000 endangered seabirds, RSPB warns

Wind farms installed offshore to tackle climate change are actually threatening thousands of endangered seabirds around the UK, according to the RSPB.

The bird charity says new wind farms could be the ‘final nail in the coffin’ for more than 1,000 birds across four of the most threatened species.

Many of these birds feed on fish at sandbanks, where developers prefer to build offshore wind turbines.

There are more than 15 proposed UK offshore wind farms, which tend to be more efficient than those on land, as stronger winds cause the turbines to spin faster, meaning they generate more energy.

Wind power is a sustainable source of energy and has a smaller impact on the environment than burning fossil fuels. 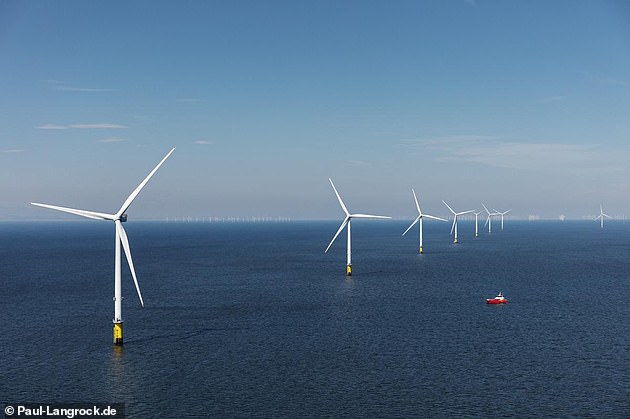 Offshore Windpark Burbo Bank Extension in Liverpool Bay on the west coast of the UK. New wind turbines are being installed as part of government plans to provide more green energy but their large blades can be lethal to feeding birds

However, in a report published in Biological Conservation, the charity has identified areas where the building of wind farm infrastructure should be banned, such as sandbanks, where birds tend to feed on small fish.

Using tracking data, scientists at the charity produced maps identifying the location of marine hotspots for kittiwakes, guillemots, razorbills and shags – which are all classed as Birds of Conservation Concern in the UK.

The maps identify the most important areas used by the birds at crucial times during the breeding season and when they are off searching for food for their young.

There is now a ‘vital need’ to understand more about our seabirds, as decisions are being made relating to offshore wind farms, as well as fishing activities, the charity says, and these maps may help planning decisions.

‘Wind farms need to be built where the sea is fairly shallow, sometimes this means they are built on areas which are meant for foraging,’ Gareth Cunningham, the RSPB chief marine policy officer, told The Telegraph.

‘We need environmentally sensible installations. We have a biodiversity emergency – we don’t want to make this worse while tackling climate emergency. 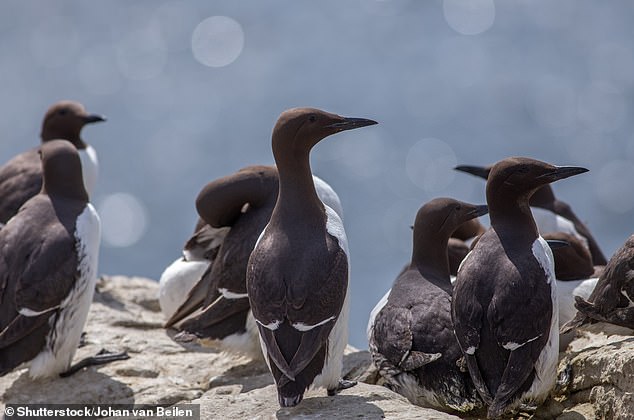 Guillemots standing on the rocks of Farne Islands in England

The blades on wind farms can be lethal to birds as they fly to their feeding spots.

Even birds that navigate the huge swooping blades are forced to take detours, meaning they take longer to bring back food for their nesting chicks, threatening populations.

‘There is a need for robust, strategic and spatial plans that tackle the climate and ecological emergencies together,’ said Helen Quayle, RSPB policy officer.

‘This research can help to direct development to areas where the risks to nature are lowest and direct supporting measures to where they can best boost the recovery and resilience of our sealife.’

According to a study published in Current Biology by the University of Aberdeen scientists, seabird populations dropped 70 per cent in the past 50 years.

Factors such as pollution, predation by invasive species on chicks, environmental changes and the destruction of their habitat by human activities has made seabirds the most threatened bird group, the study said.

The UK government announced last March that it aims to produce a third of British electricity through offshore wind power by 2030. 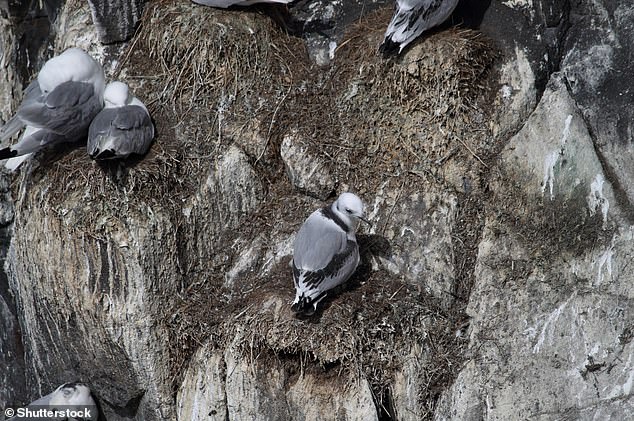 Kittiwake, which looks similar to common seagulls, on the Isle of May off the coast of Scotland

The Offshore Wind Sector Partnership would mean there would be more electricity from renewables than fossil fuels for the first time in the UK.

There are more than 15 offshore wind turbines currently in the development or proposal stage around the UK, including the East Anglia Array about 30 miles off the east coast, which is set to be operational this year.

Replacing fossil fuels with renewables will be crucial to meet the globally-agreed goal laid out in the Paris Agreement of limiting the average temperature rise to below 2 degrees Celsius this century.

HOW DO WIND TURBINES WORK?

Wind turbines operate on a simple principle- the energy in the wind turns propeller-like blades around a rotor.

The rotor is connected to the main shaft, which spins a generator to create electricity.

They work in the opposite way to a fan, instead of using electricity to make wind, like a fan, wind turbines use wind to make electricity.

There are two main types of wind turbine that operate on the same basic principle.

Off-shore ones are larger and tend to create more energy and are often built in large groups, known as wind farms.

These provide bulk power to the National Grid.