Paul J. Crutzen, a Dutch scientist who earned a Nobel Prize for work that warned the world about the threat of chemicals to the planet’s ozone layer and who went on to push for action against global warming, died on Jan. 28 in Mainz, Germany. He was 87.

The Max Planck Institute for Chemistry in Mainz announced the death, in a hospital, but did not state the cause. Susanne Benner, a spokeswoman for the institute, said Dr. Crutzen had been treated for Parkinson’s disease.

Martin Stratmann, the president of the Max Planck Society, said in a statement that Dr. Crutzen’s work had led to the ban on ozone-depleting chemicals, “a hitherto unique example of how Nobel Prize-winning basic research can directly lead to a global political decision.”

Dr. Crutzen popularized the term “Anthropocene” to describe Earth’s current geological era. The name, which he proposed in 2000 but which others had brought up in the same or slightly different spelling, suggests that we now live on a planet shaped by humanity. 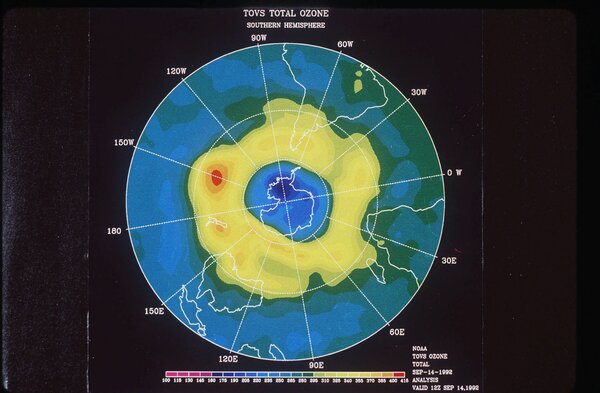 The term “continues to teach us that our collective human activities are now the most powerful geological force on Earth,” Al Gore, the climate activist and former vice president, said by email, “and his life’s work continues to inspire us to take responsibility for how that force affects our planet’s ecological integrity.”

Dr. Crutzen shared the 1995 Nobel Prize in Chemistry with F. Sherwood Rowland and Mario Molina. He found in 1970 that certain chemicals could break down ozone, a molecule that, high up in the stratosphere, absorbs dangerous ultraviolet radiation from the sun. Four years later, Dr. Rowland and Dr. Molina were able to show that gases known as chlorofluorocarbons, or CFCs, could break down in the upper atmosphere and attack the ozone layer.

After years of skepticism and pushback from industry, British scientists in 1985 discovered a hole in the ozone layer, leading to the landmark international treaty known as the 1987 Montreal Protocol and a ban on production of CFCs. (Those chemicals would later be shown to contribute powerfully to global warming, and the ban kept climate change from being even worse than it is today.)

The 1995 Nobel citation said the three scientists had “contributed to our salvation from a global environmental problem that could have catastrophic consequences.”

The New York Times wrote in 1995 that Dr. Crutzen was “known among his colleagues as a nonconformist who shows up in an open shirt and sandals at conferences where everyone else is in formal attire.”

“Instead of delivering formal papers at scientific meetings,” the Times article continued, “he fumbles a few handwritten notes, then ends up mesmerizing his audiences.”

Paul Jozef Crutzen was born on Dec. 3, 1933, in Amsterdam to Jozef and Anna (Gurk) Crutzen. His father was a waiter, and his mother worked in the kitchen of a hospital.

In an autobiographical essay on the Nobel website, Dr. Crutzen recalled profound privation during the Nazi occupation and the “hongerwinter,” or winter of famine, in 1944-45. “Many died of hunger and disease,” he wrote, “including several of my schoolmates.”

His path to atmospheric chemistry was indirect; he first set out, in 1951, to train as a civil engineer in a three-year program at a technical school so that he could save his parents the expense of college programs that might take four years or more. His father, he said, was frequently unemployed.

From 1954 until 1958, in addition to serving in the military, Dr. Crutzen worked in Amsterdam’s bridge construction bureau. During that time, as he recalled, he also met “a sweet girl,” Terttu Soininen.

“A few years later I was able to entice her to marry me,” he wrote. “What a great choice I made!”

His wife survives him, as do their two daughters, Sylvia and Ilona Crutzen, and three grandchildren.

In 1958, Dr. Crutzen saw an advertisement in a Swedish newspaper for a job programming computers in the department of meteorology at what is now Stockholm University. “Although I had not the slightest experience in this subject,” he wrote, “I applied for the job and had the great luck to be chosen from among many candidates.”

At the meteorology institute, he began studies that would lead to his receiving, in 1963, the equivalent of a master of science degree that combined mathematics, statistics and meteorology. That was followed by a Ph.D. in meteorology in 1968 and a doctorate of philosophy, the most advanced degree in the Swedish system, in 1973.

In choosing a specific topic of research, he said, “I picked stratospheric ozone as my subject, without the slightest anticipation of what lay ahead.”

He later served as director of research at the National Center for Atmospheric Research in Boulder, Colo., from 1977 to 1980, and at the Max Planck Institute from 1980 until 2000.

In a 2002 article in the journal Nature, Dr. Crutzen wrote of the increasing threat of climate change. A “daunting task,” he said, “lies ahead for scientists and engineers to guide society towards environmentally sustainable management during the era of the Anthropocene.”

In that essay and elsewhere, he raised the prospect of employing geoengineering, the field that looks for ways to combat climate change through interventions like spreading sulfur in the atmosphere to help cool the planet. The idea of geoengineering remains controversial, not only because of potential unanticipated side effects, but also because of the suspicion that the technologies could be used to postpone action on reducing greenhouse gas emissions.

Later, in an interview for a 2014 virtual exhibition on the Anthropocene, Dr. Crutzen said, “I share that fear,” adding that using the technology to avoid acting on emissions “would be totally wrong,” and that he doubted it would ever be used.

In that same interview, the journalist Christian Schwägerl asked, “Have you remained an optimist?”

Dr. Crutzen replied, “Did I say I am an optimist?”

Mr. Schwägerl then asked what made him feel optimistic, and the reply was less curt. There were the “beautiful things around us like arts and literature,” Dr. Crutzen said. “There are so many beautiful things humankind is creating that I wonder when we will make Earth more beautiful again instead of depleting everything.”