What shapes do YOU think of? People across cultures including English, Chinese and Zulu agree the word ‘bouba’ sounds round while ‘kiki’ sounds pointy, study reveals

From English to Chinese, Hungarian and Zulu, people who speak different languages make the same links between sounds and shapes, a new study shows.

An international research team has conducted the largest cross-cultural test of the ‘bouba-kiki effect’ – the tendency to associate made-up words ‘bouba’ with a round shape and ‘kiki’ with a spiky shape.

They found the effect exists independently of the language that a person speaks or the writing system that they use, whether it’s the Roman alphabet (A, B, C), the Greek alphabet (alpha, beta, gamma) or Chinese characters (北, 方, 话).

Such universally-meaningful vocalisations may form a global basis for the creation of new words, such as terms that circulate on social media. 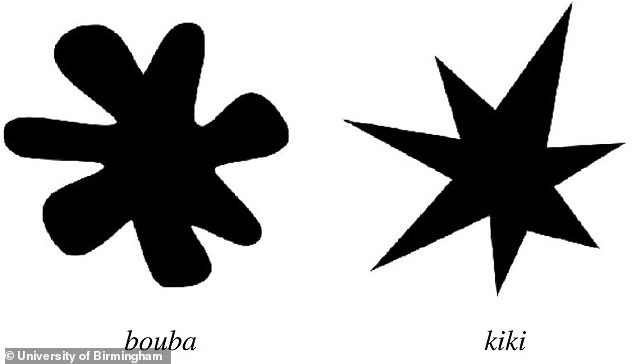 The bouba-kiki effect is the association of made-up words ‘bouba’ with a round shape and ‘kiki’ with a spiky shape.

This association shows a correspondence between speech sounds and visual properties.

Researchers have found people across 25 different languages make the link, which has ‘implications for the evolution of spoken language’.

The new study was led by Dr Marcus Perlman at the University of Birmingham and published in Philosophical Transactions of the Royal Society B.

‘Our findings suggest that most people around the world exhibit the bouba-kiki effect, including people who speak various languages, and regardless of the writing system they use,’ said Dr Perlman.

‘Our ancestors could have used links between speech sounds and visual properties to create some of the first spoken words.

‘Today, many thousands of years later, the perceived roundness of the English word “balloon” may not be just a coincidence, after all.’

The bouba-kiki effect, first documented by German psychologist Wolfgang Köhler in 1929, is thought to derive from phonetic and articulatory features of the two words – such as the rounded lips of the ‘b’ and the stressed vowel in ‘bouba’, and the intermittent stopping and starting of air in pronouncing ‘kiki’.

Also, pronouncing the harsh ‘k’ sounds in ‘kiki’ may be perceived as akin to the sharp points of a spiky shape, while the more drawn out ‘ooo’ sound in the middle of ‘bouba’ could evoke the flabbier edges of the rounder shape.

Also, the letters in kiki are visually spikier than the more rounded letters for bouba, in the Roman alphabet at least.

The results showed that 71.1 per cent of participants worldwide – 652 out of 917 – matched ‘bouba’ with the rounded shape and ‘kiki’ with the spiky one.

The effect was the strongest in Japanese, Swedish, Korean and English, but weakest in Romanian, Mandarin Chinese, Turkish and Albanian.

The researchers weren’t sure of the similarities, if any, between languages at either end of the scale that could explain this, however.

‘We do not point to any necessary connection, just to the general property that humans might share – a crossmodal correspondence between sound and shape.

‘On the other hand, there may be languages with words similar to “bouba” and “kiki” covering the expected effect through their semantic meaning (like Romanian and Turkish).’

Previous studies have already shown that the majority of people, mostly Westerners, intuitively match a bulbous shape to the word ‘bouba’ and a spiky shape to ‘kiki’.

But this study shows the effect stems from a ‘deeply rooted human capacity’ to connect speech sound to visual properties, and not just a quirk of speaking English.

The survey sample provides ‘the strongest demonstration to date that the bouba-kiki effect ‘is robust across cultures and writing systems’, the team say. 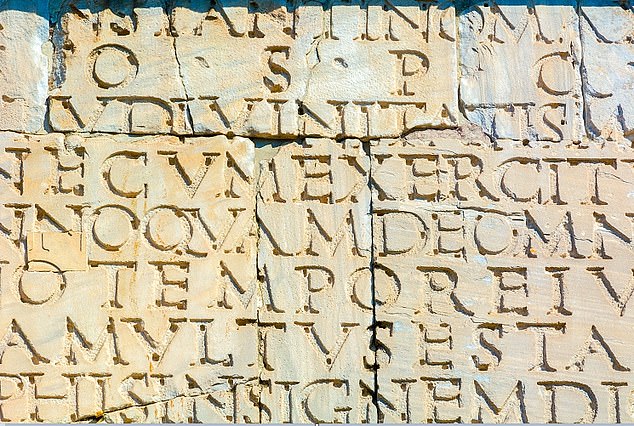 The bouba-kiki effect exists, independently of the language a person speaks or the writing system that they use, whether it’s the Roman alphabet (A, B, C, pictured), the Greek alphabet (alpha, beta, gamma) or Chinese characters (北, 方, 话)

Iconicity – the resemblance between form and meaning – had been thought to be largely confined to onomatopoeic words such as ‘bang’ and ‘peep’, which imitate the sounds they denote.

However, the team’s research suggests that iconicity can shape the vocabularies of spoken languages far beyond the example of onomatopoeias.

‘New words that are perceived to resemble the object or concept they refer to are more likely to be understood and adopted by a wider community of speakers,’ said co-author Dr Bodo Winter, also at Birmingham.

‘Sound-symbolic mappings such as in bouba-kiki may play an important ongoing role in the development of spoken language vocabularies.’

A 2016 study showed that evil characters in films and TV shows are drawn like the ‘kiki’ shape, with sharper features such as pointy noses and eyebrows.

More lovable characters, meanwhile, are usually drawn to look softer and rounder, like Baloo in the Disney classic ‘The Jungle Book’.

WHY BADDIES ARE ALWAYS TRIANGULAR AND THE GOOD GUYS ROUND

Many villains in a story are drawn or made over to have pointy and sharp features, as our brains perceive these shapes as threatening.

However, lovable characters are usually soft in round with usually has a round head or belly.

The way movie shots are framed are also used to visually tell a story.

A circular frame within the shot suggests surveillance and spying.

A rectangular frame within a shot suggest someone is trapped in their current situation.

And a scene where vertical and horizontal lines appear, such as window blinds opened just slightly to give a restricted view, suggests the character is imprisoned.