‘Planet parade’ lights up the night sky: Stargazers capture images of Mercury, Venus, Mars, Jupiter and Saturn as rare astronomical event sees EVERY world in our solar system visible at the same time

Stargazers have been capturing some spectacular images of a rare astronomical event that means every planet in the solar system is visible in the night sky at the same time.

Mercury, Venus, Mars, Jupiter and Saturn can all be seen with the naked eye, while Uranus and Neptune are possible to spot with binoculars or a telescope.

Astronomer Dr Gianluca Masi shared a picture he took of the five planets that could be seen with the naked eye, while other skywatchers across the world also captured images of the ‘planet parade’.

He took it from the roof of a building in Rome, Italy last night, using a camera with special lenses.

Dr Gianluca Masi took the image from the roof of the building where he lives last night, using a camera with special lenses. It shows Venus, Mercury, Saturn, Jupiter, Mars and the Moon 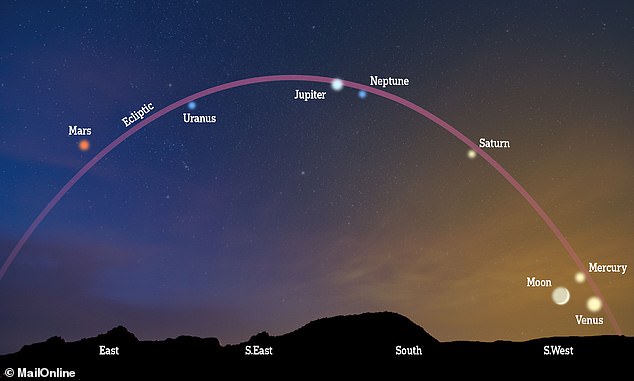 The solar system will put on a show for space fans for the next two evenings, with all seven planets other than Earth visible in the night sky

At about half an hour after sunset, look for Venus in the southwestern sky, close to the horizon. Mercury will appear very close by.

The rest of the planets – Saturn, Jupiter and Mars – will line up eastwards and sequentially higher in the sky.

Uranus, located between Mars and Jupiter, and Neptune, which is between Saturn and Jupiter, will also be visible with binoculars or telescope.

Starting from the southwestern horizon and moving east, photos show Venus, Mercury, Saturn, Jupiter and Mars in that order.

All seven other planets in our solar system will continue to be visible for the next two nights, with only Uranus and Neptune requiring a telescope or binoculars to be seen.

Dr Masi, who works with the Virtual Telescope Project, told MailOnline: ‘The opportunity to see all the planetary family at a glance does not happen often.

‘We can get a better idea of the cosmic place where we live by looking at the other planets.

‘We have just a couple of days to look at this parade, before Mercury will disappear into the solar glare.’

This week, Twitter users from across the globe, including Japan and the US, have been sharing photos of the spectacle online.

The phenomenon is known to occur about once every two years.

All planets appeared in the night sky as small points of light to stargazers in the northern hemisphere.

Mercury is the hardest planet to see without magnification, as it is sitting in a bright part of the sky, however it can be spotted close to the much brighter Venus which outshines it by 70 times.

They can be spotted low in the west, and will get the best view about half an hour after sunset, with Venus disappearing about 40 minutes later.

The rest of the planets line up eastwards, with Jupiter appearing brighter than all the stars and high in the southern sky.

While the largest planet in our solar system disappears just before midnight, Mars is visible all night after it rises in the east just before sunset.

It will appear red and brighter than most stars, while its neighbour Saturn will be a golden colour when it appear in the south west after darkness falls.

All planets appear in the night sky as small points of light to stargazers in the northern hemisphere. Mercury is the hardest planet to see without magnification, as it is sitting in a bright part of the sky, however it can be spotted close to the much brighter Venus, which outshines it by 70 times 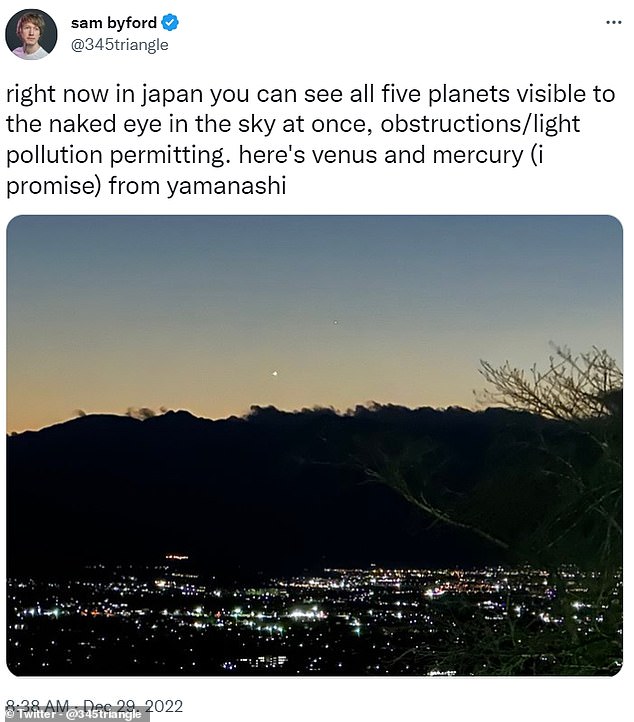 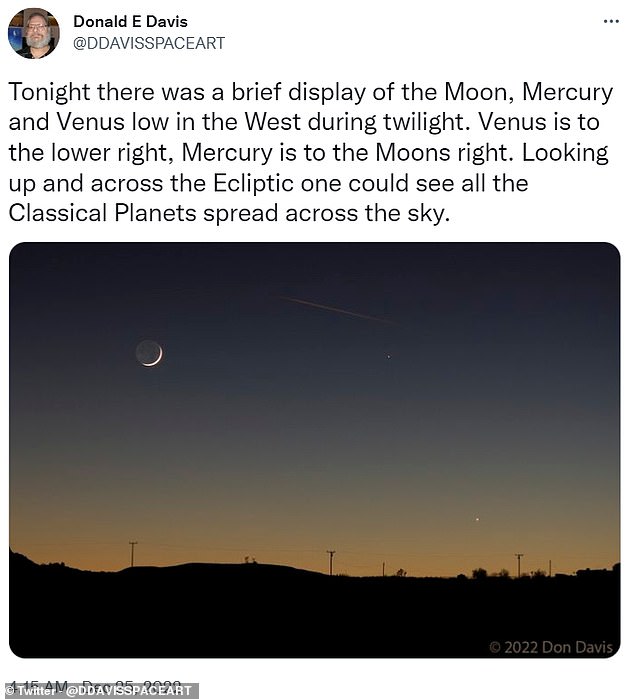 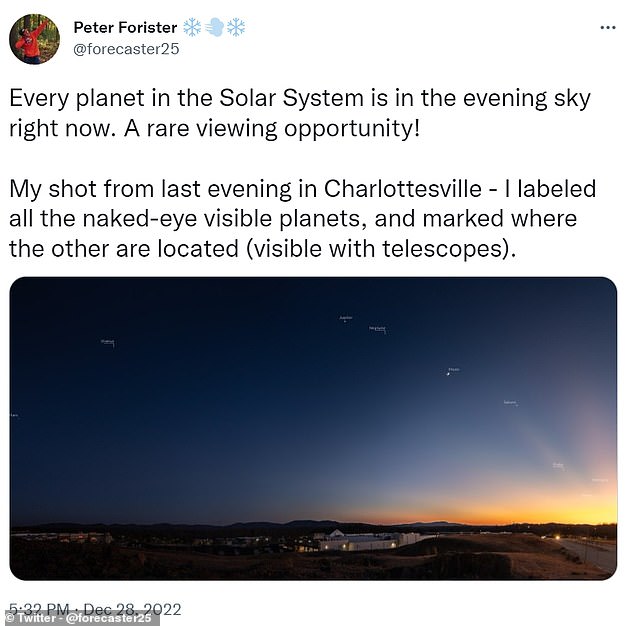 The moon also joins the planetary lineup, appearing as a waxing crescent between Jupiter and Saturn tonight.

With magnification apparatus, Uranus can be seen between Mars and Jupiter, and Neptune between Saturn and Jupiter.

Dr Masi told MailOnline: ‘We still have a couple of days to try to see this planetary alignment.

‘What is important is to choose an observing site offering an unobstructed view on the western horizon, where Venus and Mercury will be very low.

‘To see this planetary parade, you just need to look up soon after sunset; as soon as the sky is dark enough to spot, on the southwestern horizon, planet Venus, which is easy to find, being very bright.

‘Then, Mercury is within a couple of degrees from it, these next couple of days, but much fainter.

‘It should be visible by naked eye before it sets, but binoculars will make it easy to see the innermost planet.

‘Then, we have Saturn, Jupiter and Mars, plus the moon not far from Jupiter.

‘Binoculars will also show Uranus and Neptune, so that the entire planetary system can be explored in a few minutes.’

At about half an hour after sunset, look for Venus in the southwestern sky, close to the horizon. Mercury will appear very close by. The rest of the planets – Saturn, Jupiter and Mars – will line up eastwards and sequentially higher in the sky. Pictured: View of planet parade from London at 16:15 GMT on December 29

The five worlds will shine in a row because they all travel on the plane of the solar system, known as the ecliptic. However, they will not be as close as they appear, because each planet is millions of miles away from the others 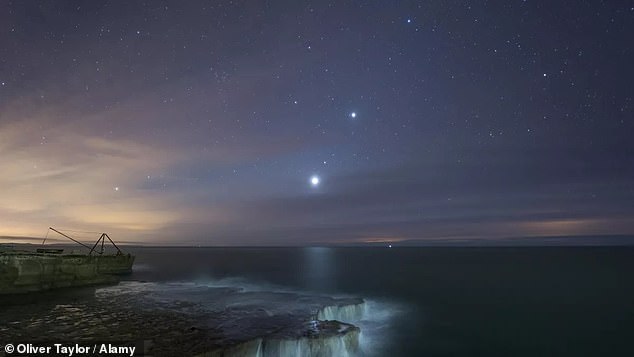 With magnification apparatus, Uranus can be seen between Mars and Jupiter, and Neptune between Saturn and Jupiter. Pictured: Venus, Mars and Jupiter align over the Isle of Portland in Dorset, UK in summer 2022

The five worlds shine in a row because they all travel on the plane of the solar system, known as the ecliptic.

A ‘planet parade’ was last visible from the UK in June, when it was also joined by a crescent moon.

The five planets visible to the naked eye all appeared in the order of their distance from the sun – a line-up that had not been seen for 18 years.

From meteor showers and solar eclipses to the crescent moon beside Saturn and Venus – find out about the astronomical events you don’t want to miss in 2023.

NASA’s Hubble telescope has discovered a ‘ghostly glow’ around our solar system equivalent to 10 fireflies, and scientists still don’t really know what it is.

And, a study has claimed that the reason aliens haven’t contacted Earth yet is because there’s no sign of intelligence here.

DOES PLANETARY ALIGNMENT HAVE AN EFFECT ON EARTH?

The planets in our solar system never line up in one perfectly straight line like they show in the movies.

If you look at a two-dimensional plot of the planets and their orbits on a piece of paper you may be lead to believe that all the planets will circle around to the same line eventually.

In reality, the planets do not all orbit perfectly in the same plane. Instead, they swing about on different orbits in three dimensional space. For this reason, they will never be perfectly aligned.

Alignment is therefore an artifact of a viewpoint and not something fundamental about the planets themselves.

Even if the planets did all align in a perfectly straight line, it would have negligible effects on Earth.

Fictional and pseudo-science authors like to claim that a planetary alignment would mean that all of the gravitational fields of the planets add together to make something massive that interferes with life on Earth.

In truth, the gravitational pulls of the planets on the Earthare so weak that they have no significant effect on Earth life.

There are only two solar system objects with enough gravity to significantly affect Earth: the moon and the sun.

The moon’s gravity is primarily responsible for the daily ocean tides. The near alignment of the sun and the moon does have an effect on the Earth, because their gravitational fields are so strong.

This partial alignment occurs every full moon and new moon, and it leads to extra strong tides called ‘spring tides’.

The word ‘spring’ here refers to the fact that the water seems to leap up the shore with the extra strong tides every two weeks – not that they occur only in the spring season.