Six years ago, scientists confirmed the existence of an elusive elementary particle known as the Higgs boson, which had long been predicted by the Standard Model.

It’s thought the Higgs boson decays to fundamental particles known as bottom quarks nearly 60 percent of the time – but when it was discovered, it had broken down to a much rarer form, such as the decay to a pair of protons. 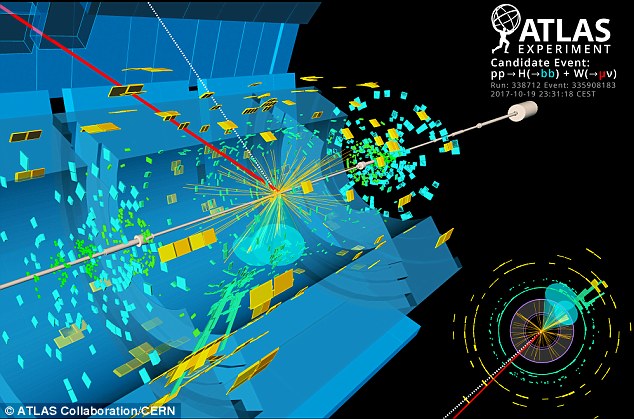 ‘This observation is a milestone in the exploration of the Higgs boson,’ says Karl Jakobs, spokesperson of the ATLAS collaboration.

‘It shows that ATLAS and CMS experiments have achieved deep understanding of their data and a control of backgrounds that surpasses expectations.

‘ATLAS has now observed all couplings of the Higgs boson to the heavy quarks and leptons of the third generation as well as all major production models.’

Spotting the Higgs boson’s most common decay channel poses a challenge due to the difficulty in distinguishing its signal from ‘background noise,’ the researchers explain.

Many other processes in the proton-proton collisions at the LHC can give rise to bottom quarks as well. 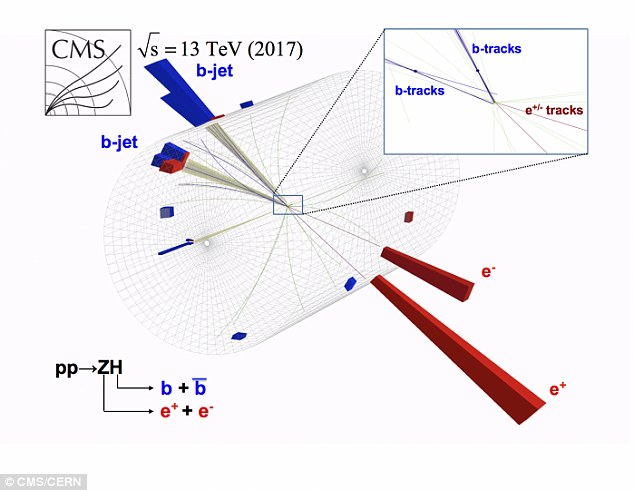 This is why it’s easier to distinguish some of the less common decay channels, such as the proton-proton result.

The ATLAS and CMS collaboration at CERN used data from the first and second runs of the LHC with collisions at energies of 7,8, and 13 TeV.

After analyzing the data, they spotted the decay to a pair of bottom quarks, with a significance exceeding 5 standard deviations.

The findings line up with predictions in the Standard Model. 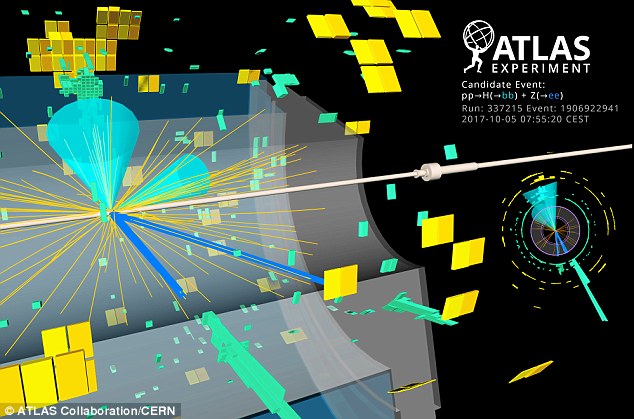 Spotting the Higgs boson’s most common decay channel poses a challenge due to the difficulty in distinguishing its signal from ‘background noise.’ Many other processes in the proton-proton collisions at the LHC can give rise to bottom quarks as well 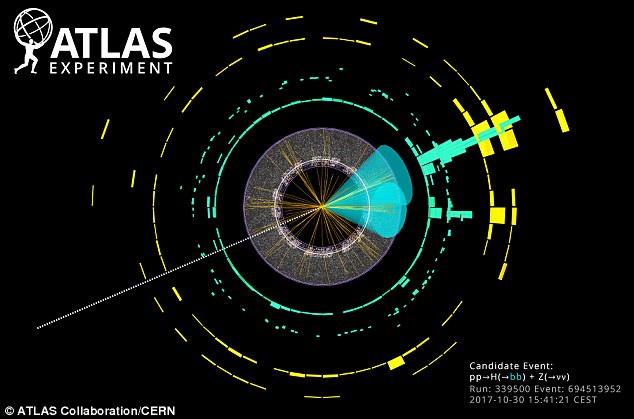 ‘This observation is a milestone in the exploration of the Higgs boson,’ said Karl Jakobs, spokesperson of the ATLAS collaboration. Candidate event display for the discovery is shown

WHAT IS THE STANDARD MODEL OF PHYSICS?

The theories and discoveries of thousands of physicists since the 1930s have resulted in a remarkable insight into the fundamental structure of matter.

Everything in the universe is found to be made from a few basic building blocks called fundamental particles, governed by four fundamental forces.

Our best understanding of how these particles and three of the forces are related to each other is encapsulated in the Standard Model of particle physics.

All matter around us is made of elementary particles, the building blocks of matter.

These particles occur in two basic types called quarks and leptons. Each consists of six particles, which are related in pairs, or ‘generations’.

All stable matter in the universe is made from particles that belong to the first generation. Any heavier particles quickly decay to the next most stable level.

There are also four fundamental forces at work in the universe: the strong force, the weak force, the electromagnetic force, and the gravitational force. They work over different ranges and have different strengths.

Gravity is the weakest but it has an infinite range.

The electromagnetic force also has infinite range but it is many times stronger than gravity.

The weak and strong forces are effective only over a very short range and dominate only at the level of subatomic particles.

The Standard Model includes the electromagnetic, strong and weak forces and all their carrier particles, and explains well how these forces act on all of the matter particles.

However, the most familiar force in our everyday lives, gravity, is not part of the Standard Model, and fitting gravity comfortably into this framework has proved to be a difficult challenge.

‘Since the first single-experiment observation of the Higgs boson decay to tau-leptons one year ago, CMS, along with our colleagues in ATLAS, has observed the coupling of the Higgs boson to the heaviest fermions: the tau, the top quark, and now the bottom quark,’ said Joel Butler, spokesperson of the CMS collaboration.

‘The superb LHC performance and modern machine-learning techniques allowed us to achieve this result earlier than expected.’

The team hopes to improve the precision of the measurements with additional data, and investigate its decay into a pair of smaller fermions called muons. 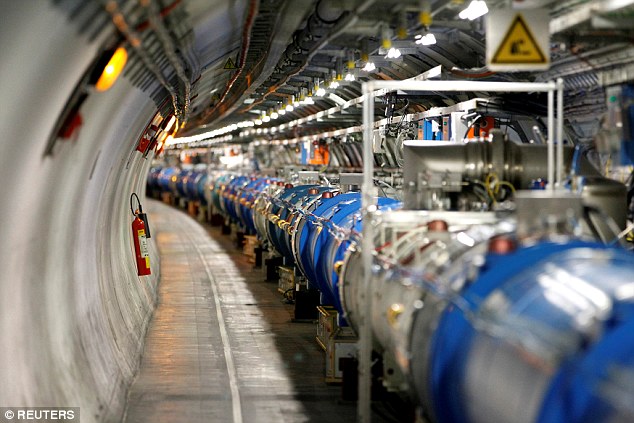 Six years ago, scientists confirmed the existence of an elusive elementary particle known as the Higgs boson, which had long been predicted by the Standard Model. A general view of the Large Hadron Collider is shown

‘The experiments continue to home in on the Higgs particle, which is often considered a portal to new physics,’ said CERN Director for Research and Computing Eckhard Elsen.

‘These beautiful and early achievements also underscore our plans for upgrading the LHC to substantially increase the statistics.

‘The analysis methods have now been shown to reach the precision required for exploration of the full physics landscape, including hopefully new physics that so far hides so subtly.’