Home » Science » Platypuses Glow Under Blacklight. We Have No Idea Why.

When last we checked on the platypus, it was confounding our expectations of mammals with its webbed feet, duck-like bill and laying of eggs. More than that, it was producing venom.

Now it turns out that even its drab-seeming coat has been hiding a secret — when you turn on the blacklights, it starts to glow.

As noted last month in the journal Mammalia, shining an ultraviolet light on a platypus makes the animal’s fur fluoresce with a greenish-blue tint. They’re one of the few mammals known to exhibit this trait. And we’re still in the dark about why they do it — if there is a reason at all.

For most humans, ultraviolet light exists outside of the visible spectrum. But certain pigments can absorb it, drain off some of its energy, and re-emit what remains as a color that people can see. Many man-made things contain such pigments, including white T-shirts, Froot Loops and petroleum jelly.

A lot of living things do, too. Scorpions, lichens and puffin beaks all pop under UV light. Blue light, which is a notch away from ultraviolet, makes the undersea world look like an indoor mini golf course, and causes dozens of types of amphibians to glow green.

Mammals, though, seem to have generally gotten the short end of this paintbrush: So far, not many have been found to have coats or skin that fluoresce. But there are exceptions, all among nocturnal creatures. In the 1980s, for example, a few researchers uncovered a rainbow of opossums.

Then one night a few years ago, Jonathan Martin, an associate professor of forestry at Northland College in Ashland, Wis., was exploring the woods behind his house with a UV flashlight when he saw that a flying squirrel at his bird feeder appeared bright pink.

Dr. Martin and a few colleagues went to the Field Museum in Chicago to confirm that finding in some preserved specimens. It turns out all three North American flying squirrel species give off a bubble gum glow under UV light. 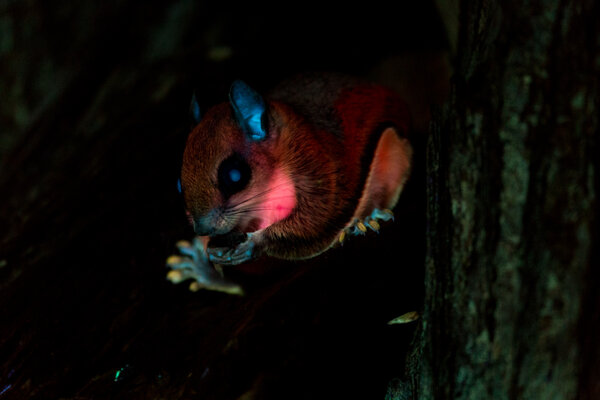 While they were there, Erik Olson, an associate professor of natural resources at the college, started “wondering how broadly distributed this trait might be,” Dr. Olson said. “Like, what about platypuses? That’s kind of as far from flying squirrels as you can get.”

After checking with the museum’s staff, the team went down to the basement, found the platypus cabinet, and flipped on their special lights. “And sure enough,” Dr. Olson said. They were eventually able to examine three platypuses: a male and a female at the Field Museum, and another male from the University of Nebraska State Museum. All gave off the same cool glow.

So did a road-killed platypus, discovered by a blacklight-wielding mycologist in northeast Australia this summer. Despite the sad circumstances of the finding, “we were elated to know that it was verified in a wild specimen,” Dr. Olson said.

So why would a platypus fluoresce?

Other instances of life-form Lite Brite serve a clear purpose. Bioluminescence, for example, helps ocean creatures lure prey and find each other in the depths. And hummingbirds get information from the ultraviolet hues that some flowers reflect.

Fluorescence, though, is a bit more opaque. Because it’s a natural property of certain materials, “just finding fluorescence doesn’t mean it has any particular purpose,” said Sönke Johnsen, a sensory biologist at Duke University who was not involved with the study. Instead, he said, that glow could be incidental — “just something that’s there because it’s there.”

It’s unknown whether platypuses can perceive either UV rays or fluorescence, especially in natural light. One theory is that by absorbing and transforming UV light rather than reflecting it, platypuses can better hide from UV-sensitive predators.

But this is just a hypothesis, Dr. Olson said: “Our main goal is to document this trait,” in hopes that future research might shed more light. For now, his group plans to strategically investigate other nocturnal mammals, to see if they can add to their list.

They may have opened a few more museum cabinets already. “Stay tuned,” he said.