Naked pterosaurs! Prehistoric flying reptiles did NOT have feathers and were most likely BALD, study claims

Pterosaurs — flying reptiles from the time of the dinosaurs — were most likely bald and did not have feathers as had been previously suggested, a study has claimed.

British palaeobiologists David Unwin and Dave Martill re-evaluated this evidence, however, and came to the conclusion that the flying reptiles had no feathers at all.

Instead, they say, the branching structures actually represent parts of the pterosaurs’ wing membranes that had begun to decay and unravel before being preserved. 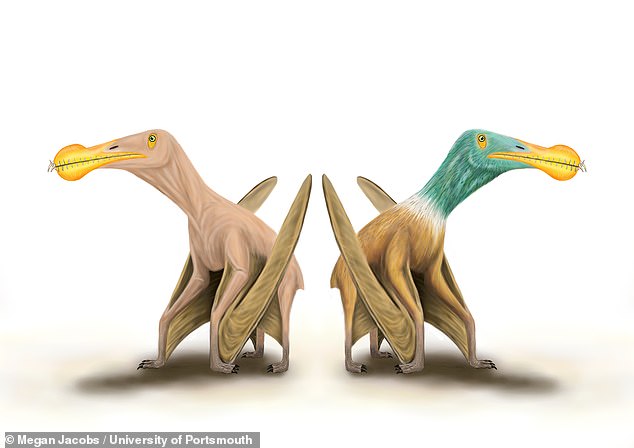 Pterosaurs — flying reptiles from the time of the dinosaurs — were most likely bald (left) and did not have feathers (right) as had been previously suggested, a study has claimed

‘The idea of feathered pterosaurs goes back to the nineteenth century but the fossil evidence was then, and still is, very weak,’ said Dr Unwin, who is a pterosaur expert at the University of Leicester’s Centre for Palaeobiology Research.

‘Exceptional claims require exceptional evidence – we have the former, but not the latter,’ he added.

If pterosaurs did sport a form of primitive feathering, such would have significant implications for our understanding of feather, pterosaur, dinosaur and bird evolution.

Such would mean that feather-like structures first evolved at least 80 million years earlier than had once been thought — and would have likely originated in an ancestor of both dinosaurs and pterosaurs, as it is unlikely to have evolved twice.

Furthermore, it would imply that dinosaurs began as feathered reptiles — but went on to lose these coverings in certain groups, such as the giant, long-necked sauropods — a notion that is the exact reverse of traditional understanding.

However, Professor Martill and Dr Unwin believe that the proposed evidence for protofeathers in pterosaurs are actually just tough fibres that formed part of the flying reptiles’ wing membranes.

In some cases, they argue, these fibres degraded before being preserved — which may account for how similar hair-like filaments, which have not branched into a feather-like structure, have been found on 27 other pterosaurs. 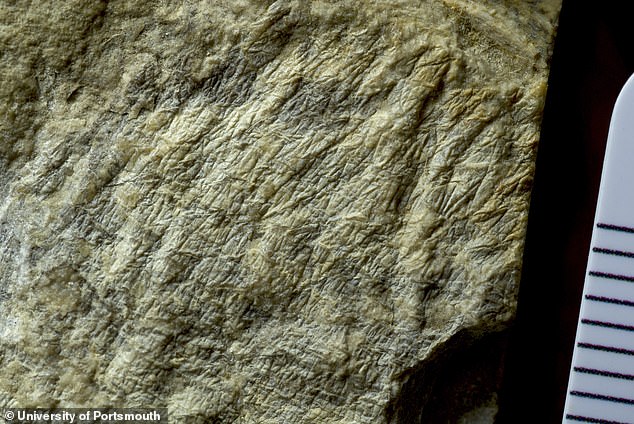 British palaeobiologists David Unwin and Dave Martill re-evaluated the ‘feathered’ specimens (one of which is pictured) and came to the conclusion that the flying reptiles had no feathers at all. Instead, they say, the branching structures actually represent parts of the pterosaurs’ wing membranes that had begun to decay and unravel before being preserved

Whichever camp is correct, many question about how pterosaurs lived will remain outstanding, the University of Portsmouth’s Professor Martill noted.

‘If they really did have feathers, how did that make them look, and did they exhibit the same fantastic variety of colours exhibited by birds?,’ he asked.

‘And if they didn’t have feathers, then how did they keep warm at night, what limits did this have on their geographic range, did they stay away from colder northern climes as most reptiles do today. And how did they thermoregulate?’

‘The clues are so cryptic, that we are still a long way from working out just how these amazing animals worked.’

The full findings of the study were published in the journal Nature Ecology and Evolution.

PTEROSAURS WERE FLYING REPTILES THAT LIVED IN THE JURASSIC AND CRETACEOUS

Neither birds nor bats, pterosaurs were reptiles who ruled the skies in the Jurassic and Cretaceous periods.

Scientists have long debated where pterosaurs fit on the evolutionary tree.

The leading theory today is that pterosaurs, dinosaurs, and crocodiles are closely related and belong to a group known as archosaurs, but this is still unconfirmed.

Neither birds nor bats, pterosaurs were reptiles who ruled the skies in the Jurassic and Cretaceous periods (artist’s impression pictured)

Pterosaurs evolved into dozens of species. Some were as large as an F-16 fighter jet, and others as small as a sparrow.

They were the first animals after insects to evolve powered flight – not just leaping or gliding, but flapping their wings to generate lift and travel through the air.

Pterosaurs had hollow bones, large brains with well-developed optic lobes, and several crests on their bones to which flight muscles attached.