Home » Science » Rats do 'joy jumps' when watching others get tickled, study shows

You’re having a laugh! Adorable footage reveals how rats do happy little jumps when simply WATCHING another rodent get tickled

Rats not only enjoy being tickled by humans, but they do happy little jumps when watching other rats get tickled, a new study shows.

In experiments in Germany, rats were filmed while watching an experimenter tickle another rat on the other side of a transparent barrier.

When rats saw others get tickled, they experienced something known as ‘Freudensprünge’ – a German term meaning ‘to jump for joy’.

What’s more, the mere observation of others being tickled induced ‘laughter’ in the rats, inaudible to the human ear. 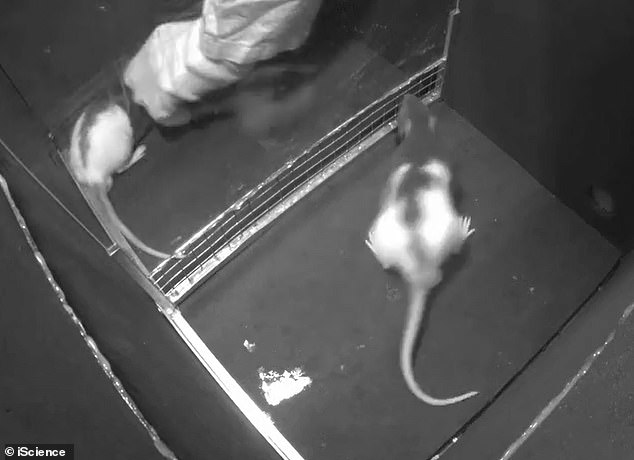 Researchers in Germany made rats watch others being tickled and studied their responses. When rats saw others get tickled, they experienced something known as ‘Freudensprünge’ – a German term meaning ‘to jump for joy’

The new study was conducted by experts at the Bernstein Center for Computational Neuroscience Berlin in Germany.

Rats like playing with humans and enjoy being tickled, according to experts at Bernstein Center for Computational Neuroscience Berlin.

Activity of the trunk somatosensory neurons – nerve cells in the brain – can also increase too.

However, according to a 2020 University of Bristol study, not all rats like to be tickled, and that by listening to their vocalisations it is possible to understand individual emotional responses.

‘Our study on rat playfulness would contribute to understanding the brain mechanisms of playful behaviours.’

Ishiyama and colleagues think rats may have the capacity to share the feelings of other individuals, which plays a ‘critical role’ in social interactions between humans.

‘Emotional contagion as a way to gain rapid emotional connectedness has been proposed to have its origins in parental behaviour and is thought to be the root of empathy,’ they say.

‘There is a growing field of research on rodent empathy, but until now these studies have mainly been focusing on negative emotions.’

Leading up to their lab experiments, all rats were handled for 20 minutes and tickled for 10 minutes individually once a day for six to eight days.

For the experiments, the researchers used a box separated into two compartments by a transparent barrier, both fitted with ultrasonic microphones.

‘Observer’ rats – the ones doing the watching – was placed into one of the compartments.

The observer rat first witnessed ‘air tickling’, where the experimenter made a tickling motion in the second compartment while it was empty.

Observer rats then witnessed audiovisual footage on a TV screen of rat being tickled, before another rat (the ‘demonstrator’ rat) was placed into the other compartment. 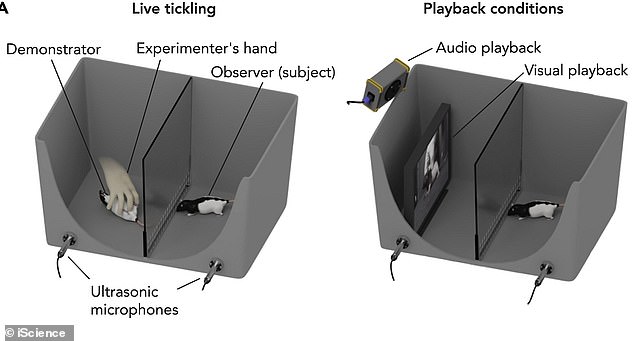 Experimental set-up: The researchers used a box separated into two compartments by a transparent barrier 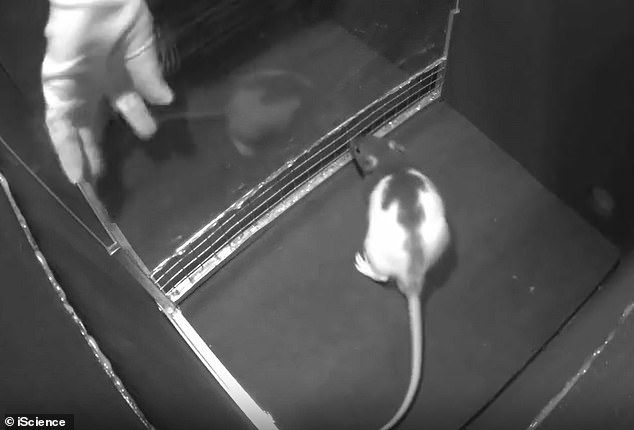 Pictured, the observer rat witnesses ‘air tickling’, where the experimenter made a tickling motion in the second compartment 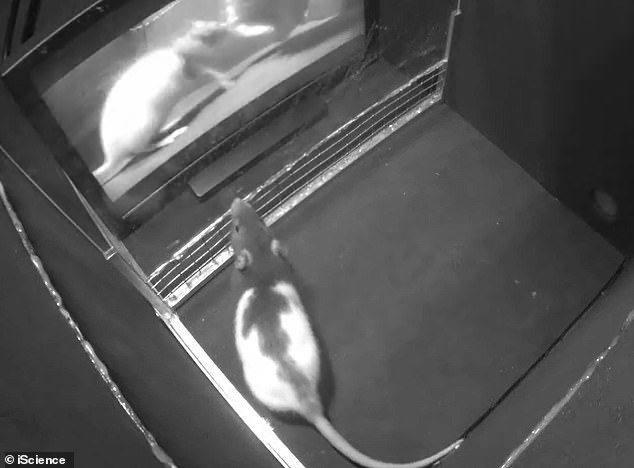 Pictured, an observer rat witnessing audiovisual footage on a TV screen of a rat being tickled

Rats can bop their heads in time to the beat of different genres of music, a recent study shows.

Researchers from the University of Tokyo played the rodents clips of Lady Gaga, Queen and Michael Jackson as well as a Mozart Sonata at four different tempos.

Any bopping was recorded both on camera and with a miniature sensor strapped to their heads.

The rodents were best at keeping in time when it was between 120 and 140 bpm.

When the demonstrator rats were tickled, the observer rats showed interest and displayed ‘playful behaviour’, including faster movement, chasing the human’s hand and doing ‘joy jumps’.

The ultrasonic microphones also picked up ultrasonic vocalisations that were not audible to the experimenter, thought to be akin to laughter.

Interestingly, the air tickling – when the experimenter’s hand tickled the air – also induced these vocalizations but not joy jumps.

The fact observer rats showed little response to audiovisual playback of tickling footage but more to the live demonstrator rat being tickled suggests ‘vicarious playfulness’, according to the researchers.

‘It is remarkable that playfulness contagion is not merely carried by the sound and vision, but it requires the presence of a live demonstrator,’ they say in their paper.

Electrodes in the brain also showed an increase in the observer rats’ neuronal responses – the activity of neurons in the brain.

Back in 2016, the research team found that neurons in the brain region called the ‘trunk somatosensory cortex’ are strongly activated when the rat is being tickled by familiar humans. 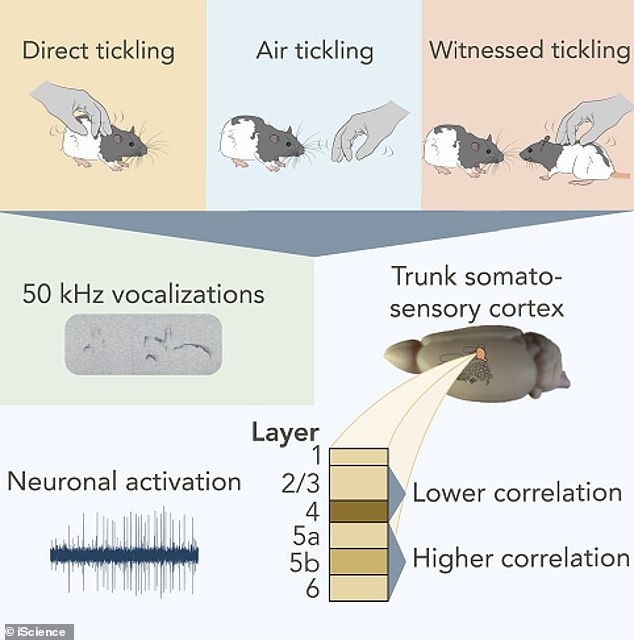 With this new study, they’ve shown that this extends to simply watching fellow rats  being tickled too.

‘We found that rats emit ultrasonic vocalizations and exhibit joy jumps, when another rat is tickled in front, as if they are tickled,’ Ishiyama told MailOnline.

‘We conclude that ticklishness and tickle-induced playfulness are contagious in playful rats, and the trunk somatosensory cortex represents “tickle-mirror” neurons.’

However, according to a 2020 University of Bristol study, not all rats like the experience of being tickled.

This study found that by listening to rat vocalisations it is possible to understand their individual emotional responses to the experience.

Rats can bop their heads in time to the beat of music, study reveals

Origins of the Black Death REVEALED in recent study

Laughing rodents may seem like a strange phenomenon, but researchers have found that rats laugh at high frequencies inaudible to humans.

Their 50-kHz ultrasonic calls, known as chirps, are distinct from the other noises they make, Scientific American reported in 2012.

Researcher Jaak Panksepp is thought to have been the first to discover that chirping can be compared to laughter in humans, by tickling rats.

He also found that the most ticklish rats – those that chirped the most – were also the most naturally playful and that laughter in young rats seems to increase bonding.

This is because in his experiments, young rats actively sought out a hand that had tickled them – presumably because the experience was enjoyable.

But he stopped short of asserting rats have a sense of humour, simply pointing out there seems to be similarities between laughter in children when they play and the same activity in rats.