Technologies that can remove carbon dioxide from the air could have huge implications for future food prices, according to new research.

Scientists say that machines that remove CO2 from the air will be needed to keep the rise in global temperatures in check.

But these devices will have major impacts on energy, water and land use.

By 2050, according to this new report, food crop prices could rise more than five-fold in some parts of the world.

In the wake of the Paris climate agreement signed in 2015, researchers have tried to understand what keeping the world under a 1.5C temperature threshold would mean in practice.

The Intergovernmental Panel on Climate Change (IPCC) reported on this question in 2018, and found that keeping below this temperature rise would require the world to reach net zero emissions by 2050 but would also need the removal and storage of large amounts of carbon dioxide from the atmosphere.

One of the ideas on how to achieve this is called BECCS – bioenergy with carbon capture and storage. It means growing crops that soak up CO2, then burning them for electricity while capturing and burying the carbon that’s produced. 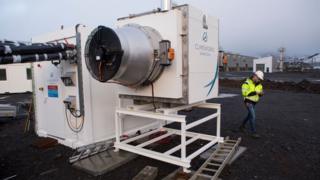 Critics say this idea would need the deployment of huge amounts of land which would reduce the amount of land for agriculture at a time of increasing global population.

Another technology that has raised much interest is called Direct Air Capture (DAC), where machines pull CO2 directly from the atmosphere.

A number of experimental installations of this idea have been successfully implemented, notably in Switzerland and Canada.

But there has been little research to date on how the deployment of DAC would impact crop and food prices.

This new study looks at the large-scale deployment of a range of negative emissions technologies including DAC.

The report says that the energy and water resources needed to drive these machines will be on a very large scale.

DAC will need large amounts of heat to make the process work, say the authors. This would require energy equal to 115% of current global natural gas consumption.

Water for DAC is also a significant cost by 2050, with the machines using 35% of the water currently used in global electricity production.

And while DAC reduces the amount of land required, there will still be a need for significant amounts of energy crops and new forests.

“I want to make clear that we’re not in any way trying to throw cold water on efforts to try and develop DAC,” says Dr Andres Clarens from the University of Virginia, who led the study.

“I think DAC is really very important technology that needs to be developed.”

“But in our simulations, what we find is that the world doesn’t just go 100% all in on DAC, right?

“Even under optimistic pricing scenarios for the technology, the world is still deploying a decent amount of BECCs, if you want to get to 1.5C.

“DAC is not going to be the only thing.”

According to the report, with widespread use of DAC, many parts of the world will see substantial price increases in maize, wheat and rice.

The worst affected areas would be in sub-Saharan Africa which could see prices rise by 5-600% by 2050.

India, Pakistan and many other countries in Asia could see three to five-fold increases, while Europe and South America could see prices double or treble.

But some people involved in DAC reject the report’s findings, saying that the authors wrongly assumed that all air capture systems are the same.

“We would like to point out that the paper only analysed liquid sorbent direct air capture technology whilst Climeworks has developed a solid sorbent technology that does not rely on the burning of natural gas or has a need for fresh water to deliver carbon dioxide removal from the air,” said Christoph Beuttler from Climeworks.

“We are confident that if the paper would have made that distinction the reported direct air capture potentials could be significantly higher and the risks lower.”

Despite the questions over methods, all involved in negative emissions agree that the longer it takes to implement these technologies, the bigger the impact on food, energy and water.

Short-term efforts to decarbonise, particularly in transport and energy production will alleviate some of the difficulties with negative emissions.

“Anybody that thinks we can continue to burn fossil fuels for another decade, because we’ll just do DAC, you know, down the road. That’s not a viable approach.”

The study has been published in Nature Climate Change.