Robot lawyer takes its first court case: Hearing next month will see the defendant get advice from artificial intelligence using a smartphone app

A court hearing in February is set to make history when the defendant is advised by artificial intelligence.

The technology stems from the company DoNotPay, founded in 2015 by a then-Stanford University freshman, that was initially developed to appeal parking tickets.

The world’s first robot lawyer will run on the defendant’s smartphone and listen to commentary to provide its client with instructions on what to say in arguments.

The courthouse location, charges and name of the defendant have not been revealed, according to New Scientist. 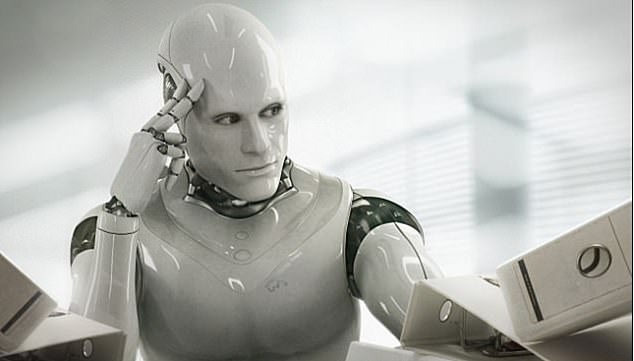 The defendant will use a smartphone app powered by the robot lawyer, which will advice them on what to say during the court case set for February

Joshua Browder initially created the robot to appeal parking tickets in the UK when he first launched the technology but has since expanded it to the US.

However, this technology was designed in a chat format where the bot would proceed with questions to learn the details of your case, such as ‘were you or someone you know driving?’ or ‘was it hard to understand the parking signs?’

After it analyzes your answers, the robot decides if you qualify for an appeal, if yes, it will generate an appeal letter that can be brought to the courts.

A similar format will be used in the February court case, but will ‘listen’ to conversations between the prosecutor and defendant to advise its client on what to say next.

The AI, however, was trained on factual statements to ‘minimize legal liability,’ Browder told New Scientist.

The robot lawyer that overturned 160,000 parking tickets can now help you in 1,000 legal areas for free

Hiring a lawyer can be expensive, but a new robot could allow you to access the same advice for free.

He also tweaked the audio tool not to react to statements instantly, instead letting the offense finish their discussion, analyze comments and then present a solution

‘It’s all about language, and that’s what lawyers charge hundreds or thousands of dollars an hour to do,’ Browder said, who believes this technology will one day replace lawyers.

‘There’ll still be a lot of good lawyers out there who may be arguing in the European Court of Human Rights, but a lot of lawyers are just charging way too much money to copy and paste documents and I think they will definitely be replaced, and they should be replaced.’

DoNotPay’s website shows its technology can be used for things other than a robot: fight corporations; beat bureaucracy; find hidden money; and sue anyone.

The robot has learned the laws about canceled and delayed flights and payment protection insurance.

DoNotPay also offers consumer and workplace rights advice to people in the US and the UK, including harassment at work or misleading claims in adverts.

And it will connect users to outside help, such as pro bono legal representation, for more serious cases.

China has been the first to use artificial intelligence in the courtroom.

Last July, it was revealed the nation is using the technology to ‘improve’ its court system by recommending laws, drafting documents and alerting ‘perceived human errors’ in rulings.

Judges must now consult the AI on every case by law, Beijing’s Supreme Court said in an update on the system published this week, and if they go against its recommendation, they must submit a written explanation for why. 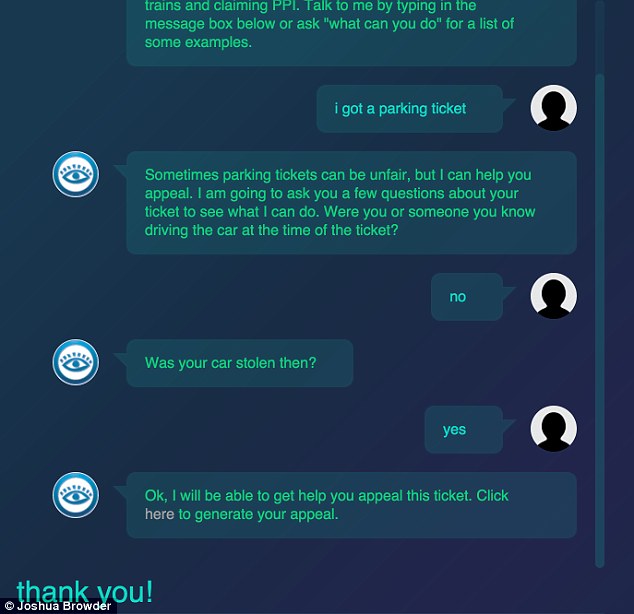 The DoNotPay robot, developed in 2015, was designed in a chat format where the bot would proceed with questions to learn the details of cases dealing with parking tickets

The AI has also been connected to police databases and China’s Orwellian social credit system, handing it the power to punish people by automatically putting a thief’s property up for sale online.

China has been developing a ‘smart court’ system since at least 2016 when Chief Justice Qiang Zhou called for technology to improve the ‘fairness, efficiency, and credibility’ of the judicial system.

That has meant introducing robot receptionists to courthouses to offer online legal help, automatic voice recognition recorders in courtrooms that eliminate the need for transcribing, and ‘virtual courtrooms’ where cases can be heard online.

China has even introduced a highly specialized’ internet court’ that deals solely with cases related to the virtual world – such as online loans, domain name disputes, and copyright issues.