Talking autonomous robots could help curb the epidemic of loneliness plaguing the elderly.

A study equipped a popular robot, called Pepper, with AI-powered software designed to give the machine a ‘cultural component’.

Pepper is made by engineering giant SoftBank Robotics and the conversational personality trait is created by a company called Caresses.

These robots were tested in care homes in the UK and Japan and researchers found that older adults who used them – up to 18 hours across two weeks – saw a significant improvement in their mental health.

Experts who developed the technology say it is no substitute for genuine human carers but the robots could offer extra support alongside current systems. 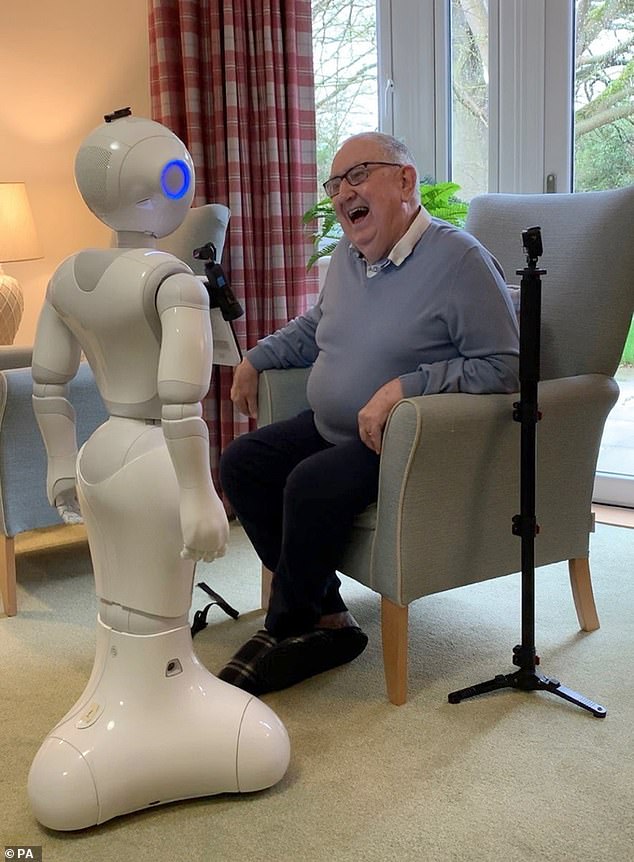 A study equipped a popular robot, called Pepper, with AI-powered software designed to give the machine a ‘cultural component’. It found that elderly people were less lonely and had improved mental health when they had access to the robot

The study,led by the University of Genova, is the first time researchers have collaborated to explore the possibility of developing culturally competent robots.

After two weeks of using the system there was a small but positive impact on loneliness severity among users, the researchers say.

Pepper was able to hold conversations with participants and offer them activities which it believed would be of interest to them.

This includes playing music, helping a person learn a language or talking a certain point in the person’s past.

The humanoid assistant communicates via a screen on its chest and has a mouth, eyes and ears on its round head.

Pepper’s components come from Asia but are assembled by French firm Aldebaran Robotics, a subsidiary of the mobile carrier Softbank.

Makers SoftBank have said it – or ‘he’ as the company calls the robot – could become a companion in people’s homes in the future too.

Equipped with a camera and sensors, Pepper weighs in at 62lb. It can react to human emotions by offering comfort or laughing if told a joke, and the robot has the ability to learn.

Caresses, which stands for Culture-Aware Robots and Environmental Sensor Systems for Elderly Support, says the more time the system spends interacting with a person, the more natural a conversation becomes.

The researchers also note that the interactions with Pepper had a significant positive impact on participants’ attitudes towards robots.

Lead author of the evaluation, Dr Chris Papadopoulos, from the University of Bedfordshire, said: ‘This study is ground-breaking because it is the largest ever investigation into the use of autonomous social robots for older adults in care settings.

Pepper the robot comforts coronavirus patients being quarantined at hotels

Coronavirus patients with mild symptoms were quarantined at hotels in Tokyo staffed by robots back in May.

Five hotels around the city used robots to help limit the spread, one being the world’s first social humanoid Pepper.

‘Please, wear a mask inside,’ it says in a perky voice to welcome those moving into the hotel and also offers words of support – ‘I hope you recover as quickly as possible.’

Other facilities have employed AI-powered robots that disinfect surfaces to limit the need of human workers who are at risk of being exposed.

Kan Kiyota, marketing director of SoftBank, which makes the Pepper robot, said: ‘Since patients are infected with COVID-19, it is not possible to have a real person to interact with.

‘This is where the robot comes in.’

The machine is wearing a protect face mask and interacts with humans as they walk in.

‘The results show that using the Caresses artificial intelligence in robots such as Pepper has real potential benefit to a world that is witnessing more people living longer with fewer people to look after them.

‘Poor mental health and loneliness are significant health concerns and we have demonstrated that robots can help alleviate these.’

Irena Papadopoulos, professor of transcultural health and nursing at Middlesex University, was responsible for developing the cultural concepts and guidelines so that the robots were able to respond to the culture-specific needs and preferences of older people.

‘Socially assistive, intelligent robots for older people could relieve some pressures in hospitals and care homes.

‘No-one is talking about replacing humans – the evaluation demonstrates that we are a long way from doing that – but it also reveals that robots could support existing care systems,’ she said.

Dr Sanjeev Kanoria, surgeon, founder and chairman of Advinia Health Care, one of the largest providers of dementia care in the UK, said: ‘Robots were tested and improvements in functionality made following trials at Advinia care homes.

‘This is the only artificial intelligence that can enable an open-ended communication with a robot and a vulnerable resident.

‘We are working towards implementing this into routine care of vulnerable people to reduce anxiety and loneliness and provide continuity of care.

‘The robot was tested in Advinia’s care homes in the UK. Now we are working towards bringing the robot into routine care, so it can be of real help to older adults and their families.’ 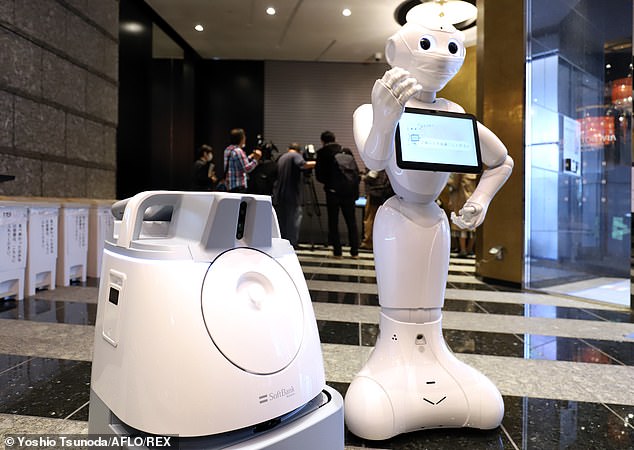 WHAT ARE PEPPER ROBOTS?

The expressive humanoid is designed to identify and react to human emotions.

They can react to human emotions by offering comfort or laughing if told a joke.

Developers say the robots can understand 80 per cent of conversations.

They also have the ability to learn from conversations in both Japanese and English.

They have already been used in a number of places, including banks, shops and hotels.

In 2016 SoftBank replaced staff at a new phone store in Tokyo with 10 humanoid Pepper robots to give suggestions and answer questions from customers.

And in December, Nescafe hired 1,000 Pepper robots to work in home appliance stores across Japan to help customers looking for a Nespresso coffee machine.

Last month another robot developed by Softbank Robotics was deployed at a hotel on Lake Garda.

Named Robby Pepper, the robot has been taught a list of questions such as the locations of the spa and restaurants and their opening hours.

In September 2018, these robots are going to be used to helped look after elderly people in the UK.

The firm says the humanoid companions have been programmed to recognise the needs of residents.

Tablets on the robots’ chests mean residents can Skype call people, watch or listen to something, or be reminded when to take pills.

These robots represent an expansion in automation, but one that is likely to be scaled up only when better artificial intelligence is developed.