Home » Science » Russia has struck deals to supply its vaccine to over 40 countries, as poorer nations struggle to access Western shots

More than 40 countries have agreed deals with the makers of the vaccine, many of which have little ability to access the in-demand shots made by Western companies which are powering vaccination drives in the US and Europe.

Thee Russian Direct Investment Fund, the body that backed the vaccine and handles its marketing, listed the nations in a press release on Wednesday.

The vaccine is also approved by the Palestinian Authority and by an entity of Bosnia and Herzegovina called the Srpska Republic, the press release said.

Kirill Dmitriev, CEO of the RDIF, told Insider on February 2 that he has little interest in seeing the vaccine used in the US, and only a moderate interest in sending it to Europe.

Outside of these markets, however, there is a wide field. Beyond the US and western Europe, there are relatively few doses available from vaccine-makers like AstraZeneca, Moderna, Pfizer and Johnson & Johnson.

Nations including the US, Canada, and the UK have ordered enough doses to vaccinate their populations several times over, and have been accused of hoarding. They are also getting their doses sooner.

A mechanism intended to provide access to the poorest countries, the World Health Organization’s COVAX scheme, has been slow to deliver the vaccines. The first ones reached Africa on March 1.

Lawrence Gostin, a professor of medicine at Georgetown University and Director of the WHO Collaborating Center on National and Global Health Law, told Insider in an interview that the distribution of doses is obviously unfair.

“What should be a politically neutral scientific life-saving medical resource is being divvied up around the world, according to political and geostrategic spheres of influence,” he said.

This has created a vacuum in poorer countries.

The RDIF makes no secret of its intentions. “Our priority is the Middle East, Latin America, Asia, Africa, those countries who are very eager to procure Sputnik,” Kirill Dmitriev, CEO of RDIF, said to the Saudi-backed outlet Arab News in an interview on January 18.

“Russia is selling to desperate people,” Gostin said. “Governments realize that people are dying, that [COVID-19] is absolutely shattering their economies, and that they’re losing public trust”.

“If it was an informed and competitive market, countries could choose between a number of equally effective or more effective vaccines,” Gostin said. “They probably wouldn’t take the Russian one.”

The shot has been shown to be highly effective in clinical trials, with 91.6% efficacy. But by then, the shot was mired in mistrust because the Russian government decided to start using the shot on its population months before the trials were finished.

“Once a country has blatantly violated all of the scientific and ethical rules about deploying a vaccine, it’s hard to regain trust, at least in people who have a choice,” Gostin said.

“They’ve got a choice between doing nothing or giving their country some hope. And the Russian vaccine represents hope.”

Some of the countries have got their doses already.

Argentina leads the way in terms of number of Sputnik V vaccines administered in Latin America, where the vaccine is making headway. It had already administered over 270,000 first doses and 45,000 second doses in January, Reuters reported on January 28. It has ordered 20 million doses of the vaccine.

Mexico, Venezuela, Bolivia, and Paraguay have also received some doses, and are expecting more. 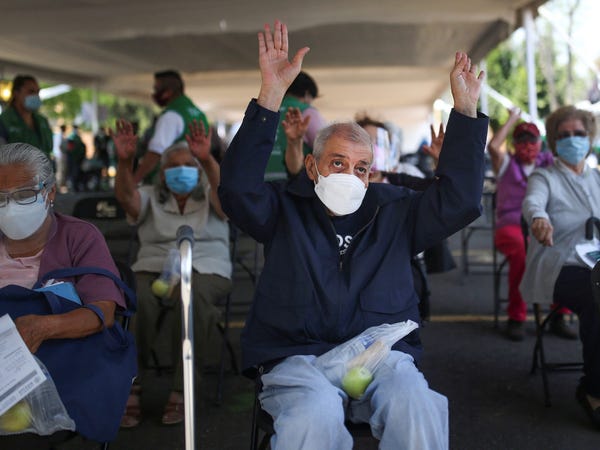 The vaccine is also gaining ground in Europe, particularly among Eastern European countries, which are historically closer to Russia.

The country has vaccinated about 1.5 million of its people with a combination of Pfizer/BioNtech, China’s Sinovac shot, and Sputnik V. Within that figure it was not clear how many were Sputnik jabs.

“Whether [vaccines] come from China, the US or EU — we don’t care as long as they’re safe and we get them as soon as possible,” Serbia’s Prime Minister Ana Brnabic told the BBC on February 10.

San Marino and Montenegro have also received a couple thousand doses of Sputnik V each.

Some European countries have expressed interest in the vaccine but appear to be waiting for the influential European Medicines Agency to give its approval. Countries can move without EMA approval, but tend not to.

The EMA announced it was starting a rolling review of the Sputnik V vaccine on Thursday.

Frustrated with the delays, some of the EU member states have decided not to wait for the EMA. Hungary was the first member state to splinter from the bloc.

“Every day that we would spend waiting for Brussels, we would lose a hundred Hungarian lives,” Mr Orban told Hungarian radio, the Irish Times reported on February 14. “I don’t trust a [vaccine] analysis in Brussels more than I do in a Hungarian one.”

As of March 4, Hungary has administered 19,582 doses, according to European Center for Disease Prevention and Control data.

Slovakia followed suit. It has purchased 2 million doses of Sputnik V and received 200,000 doses of the vaccine on Wednesday.

“It is right to buy the Russian vaccine as COVID-19 does not know anything about geopolitics,” Slovakia’s Prime Minister Igor Matovic said, the Moscow Times reported on Monday. 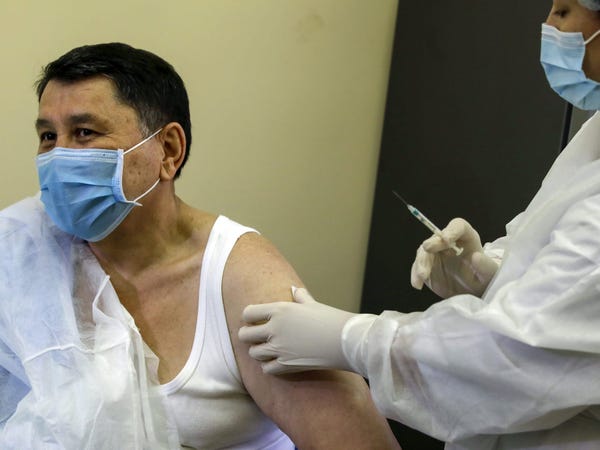 Russia has proved eager to capitalize on the publicity opportunities that its vaccine distribution offers, often with some theatricality.

The scene is practically the same in several countries. Journalists are invited to airport runways to witness the offloading of crates of vaccine, stamped with the Sputnik V and the RDIF logo or draped with a Russian flag.

And here is Slovakia:

Africa could have been a more difficult sell for the Russian vaccine, as the continent has a close relationship with the Chinese government which has invested heavily in infrastructure development in Africa.

However, China has been slow to deliver vaccines there, and the African Union has already secured 3 million doses from Russia, which are due to arrive in May

They will come at a price. The RDIF had announced that the vaccine would be 2 to 3 times cheaper than mRNA vaccines (like Pfizer’s). But when it came down to striking a deal, the price was $10 a shot, three times the rate the AU is paying for shots from AstraZeneca ($3) or Pfizer ($6.75), the FT reported last week.

Algeria started vaccinating with Sputnik V on January 30 and Egypt gave the vaccine emergency use authorization on February 24.

The United Arab Emirates gave emergency approval to the vaccine on January 21, before the Phase 3 trial results were published. 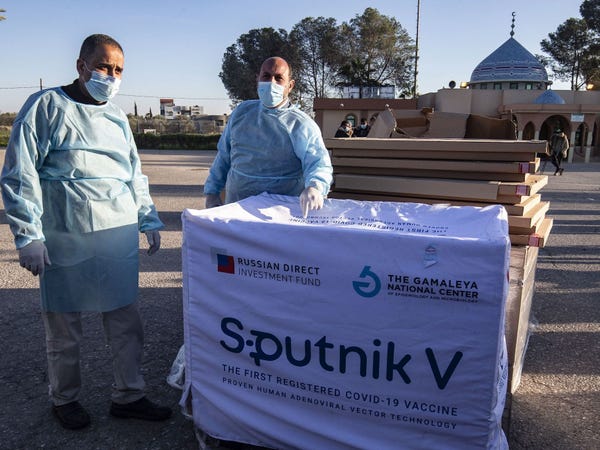 For Gostin, the health expert, geopolitical advantage is not the only driver of Russia’s strategy.

“[Russia] is really trying to advance its technological standing in the world,” Gostin told Insider. “This is kind of a way of demonstrating that Russia’s technology prowess is the equal to that of the West.”

“It’s no accident that it was called Sputnik because it’s really is very reminiscent of the race to the moon with the United States.”

“The truth is that you’ve got Russia playing politics with vaccines, trying to get a geostrategic advantage and bolstering their image abroad. Then you’ve got Europe, the US, the UK, and Canada that are hoarding vaccines and robbing lower-income countries.”

“I don’t know that leaders of Europe and the US can look themselves in the mirror and feel any kind of ethical superiority.”