Specially-trained sniffer dogs are able to detect positive cases of Covid-19 more than a week before lab swabs, a study has found.

A pilot on the effectiveness of Covid sniffer dogs was conducted on players at Belgian football club KV Oostende.

Sniffer dogs have been rolled out as a virus screening tool for new arrivals at airports in Belgium, Finland and the United Arab Emirates. 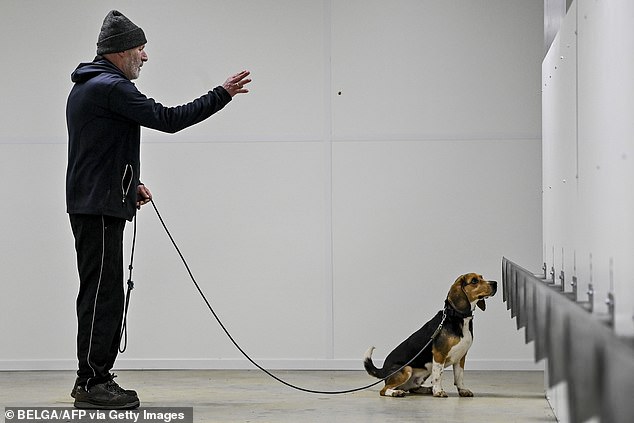 SNIFFER DOGS AND COVID-19: WHAT YOU NEED TO KNOW

Dogs have an incredible sense of smell which has made them useful in the detection of diseases for decades.

The complex folded structure of their nasal cavity – which results in a huge surface area – is home to over 300million scent receptors compared to 5milllion in a human, according to researchers at London School of Hygiene & Tropical Medicine (LSHTM).

In July 2020, researchers in Germany found trained sniffer dogs can detect the coronavirus in human swab samples with 94 per cent success rate.

LSHTM, in collaboration with Medical Detection Dogs (MDD) and Durham University, have been rigorously testing whether six dogs can detect coronavirus smells through an intensive training programme, which was announced in May.

If successful, the clever dogs could be deployed to places like airports within eight to ten weeks after training, the researchers said, where each dog can ‘screen’ 250 people per hour.

Canine scent detectors have been working at Helsinki-Vantaa Airport since 22 September in a pilot study to see if they can speed up the detection of SARs-CoV-2 in the arrivals lounge.

In the Belgian trial, dogs were tasked with smelling sweaty swabs from the armpits of players for any signs of infection.

Previous studies have found a distinctive ‘corona odour’ is present from the very first day of infection.

However, currently there are no diagnostic tools able to identify it, except for the hyper-sensitive olfactory system of man’s best friend.

Flemish newspaper De Standaard reports that the dogs have an accuracy rate of 99.5 per cent.

This is akin to the sensitivity of PCR lab swabs taken from the nose, considered the gold standard of coronavirus testing.

Dogs were trained by experts at K9 Detection, based in Ostend.

K9 Detection CEO Johan Weckhuyzen  said: ‘There were players who tested negative via PCR, but were found to be positive with us.

‘Eight or nine days later they turned out to be positive.

‘If they had followed our result, the infected player would have been quarantined earlier and the virus would not have spread further in the group of players.’

The football club says it is unlikely sniffer dogs will replace PCR testing entirely, but it may play a role as a mass screening tool to allow fans back into the stands.

‘Having a few thousand people take a PCR test before they are allowed to come to football is not financially and practically impossible,’ the club says.

The trial backs up findings from a recent study at a Finnish airport where the dogs stopped people who were seemingly well.

Travellers stopped by the sniffer dogs were given swab tests to see if they were carrying the virus but they all came back negative.

A few days later, however, the same supposedly-negative people told researchers they had come down with symptoms of Covid-19.

Six sniffer dogs were trialled by the London School of Hygiene and Tropical Medicine last year to see whether they could be used to detect the virus.

The results of the £500,000-study were reported to Health Secretary Matt Hancock in October, but it is unknown whether they will lead to dogs being used officially.

The three dogs involved in the Finnish study – named Miina, Kossi and Valo – had a near 100 per cent success rate in detecting the virus, said lead researcher Anna Hielm-Bjorkman from the University of Helsinki.

‘They’re actually finding PCR negatives that are going to be PCR positives in a week’s time,’ she told The Times.

Dogs can be trained to detect people infected with coronavirus by sniffing their armpits, a December study found.

Researchers from the National Veterinary School of Alfort, France, recruited six dogs previously trained to sniff out other things and re-trained them to detect Covid-19.

Because of their famously acute sense of smell, dogs have been used to root out drugs, explosives and even successfully pick up diseases like colon cancer.

A team of French scientists have now shown man’s best friend can also help save lives during the pandemic by spotting the virus 75 to 100 per cent of the time.

A number of pilot schemes involving the dogs have been trialled around the world, including in the United Arab Emirates, Lebanon, Finland and Australia.

Travellers may already have seen the specially trained dogs at some airports, but the researchers are still trying to prove without a doubt that dogs can pick up the scent before the method is fully adopted and rolled out internationally.

The team behind the study hope their findings will mean dogs could be used in parts of the world without the infrastructure for expensive mass testing.