The mysteries of Saturn’s largest moon, Titan, continue to grow with the discovery of a behemoth ice block that stretches for 4,000 miles.

The sprawling formation, recorded by NASA’s Cassini spacecraft, spans about 40 percent of the moon’s circumference, and like most findings about Titan, the discovery has lead to even more questions.

‘This icy corridor is puzzling, because it doesn’t correlate with any surface features nor measurements of the subsurface,’ said University of Arizona researcher Caitlin Griffith who co-authored a recent study on the recent findings. 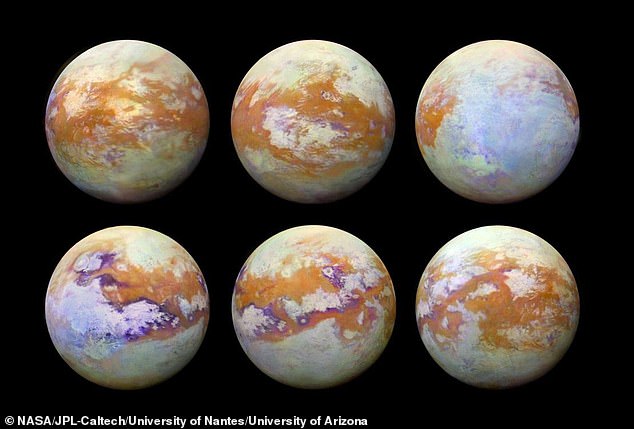 Titan is Saturn’s largest and most mysterious moon with features like lakes and ice that continue to puzzle scientists.

‘Given that our study and past work indicate that Titan is currently not volcanically active, the trace of the corridor is likely a vestige of the past,’ Griffith said.

‘We detect this feature on steep slopes, but not on all slopes. This suggests that the icy corridor is currently eroding, potentially unveiling presence of ice and organic strata.’

The discovery was made using a new method of detection called the Principal Components Analysis (PCA) that lets scientists process multiple pixels of Cassini’s imagery at once to glean more specific elements of the moon’s surface.

For studying Titan, the new method proved to be critical in teasing out specific elements of the moon.

According to observations, Titan’s surface is difficult to study due to layers of haze that shrouds the surface and a liquid organic compounds that fall like snow to fill lakes and caverns.

Because of those unique conditions, things like water and ice can be difficult to spot.

‘We’re looking for very subtle features that are hidden behind bigger features,’ Griffith told Scientific American. ‘[PCA] works like a charm actually, so that allowed us to get very detailed information on these very weak features’ 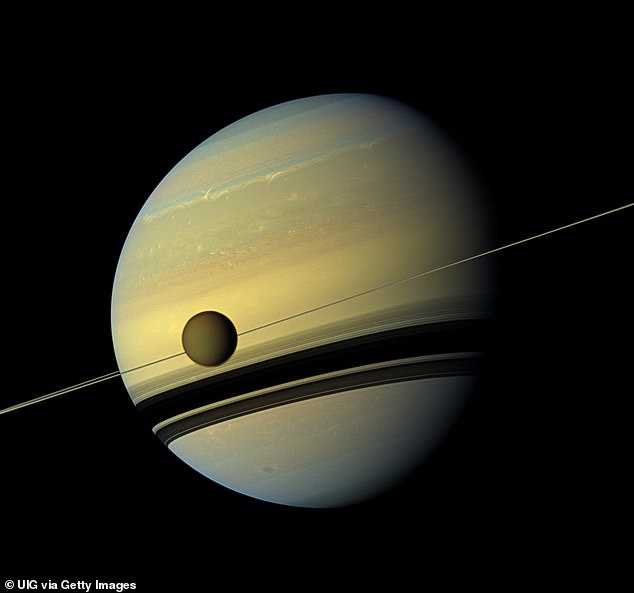 While the study of Titan yielded interesting results, Griffith and her team originally set out to find another confounding feature thought to exist on the moon called a cryo-volcano.

The massive volcano was thought to have once erupted the water ice that now shrouds the moon’s surface and is also thought to be the source of a surprising amount of methane found in the moons atmosphere.

With the new method Griffith said they will explore Titan’s methane-rich poles in hopes of unlocking even more mysteries of the moon’s history and possibly how it relates to our own planet.

‘Both Titan and Earth followed different evolutionary paths, and both ended up with unique organic-rich atmospheres and surfaces,’ Griffth said in a statement.

‘But it is not clear whether Titan and Earth are common blueprints of the organic-rich of bodies or two among many possible organic-rich worlds.’

WHAT DID CASSINI DISCOVER DURING ITS 20-YEAR MISSION TO SATURN?

An artist’s impression of the Cassini spacecraft studying Saturn

In 2000 it spent six months studying Jupiter before reaching Saturn in 2004.

In that time, it discovered six more moons around Saturn, three-dimensional structures towering above Saturn’s rings, and a giant storm that raged across the planet for nearly a year.

On 13 December 2004 it made its first flyby of Saturn’s moons Titan and Dione.

On 24 December it released the European Space Agency-built Huygens probe on Saturn’s moon Titan to study its atmosphere and surface composition.

There it discovered eerie hydrocarbon lakes made from ethane and methane.

In 2008, Cassini completed its primary mission to explore the Saturn system and began its mission extension (the Cassini Equinox Mission).

In 2010 it began its second mission (Cassini Solstice Mission) which lasted until it exploded in Saturn’s atmosphere.

In December of the following year it tracked the transit of Venus to test the feasibility of observing planets outside our solar system.

In March 2013 Cassini made the last flyby of Saturn’s moon Rhea and measured its internal structure and gravitational pull.

Cassini didn’t just study Saturn – it also captured incredible views of its many moons. In the image above, Saturn’s moon Enceladus can be seen drifting before the rings and the tiny moon Pandora. It was captured on Nov. 1, 2009, with the entire scene is backlit by the Sun

In July of that year Cassini captured a black-lit Saturn to examine the rings in fine detail and also captured an image of Earth.

In April of this year it completed its closest flyby of Titan and started its Grande Finale orbit which finished on September 15.

‘The mission has changed the way we think of where life may have developed beyond our Earth,’ said Andrew Coates, head of the Planetary Science Group at Mullard Space Science Laboratory at University College London.

‘As well as Mars, outer planet moons like Enceladus, Europa and even Titan are now top contenders for life elsewhere,’ he added. ‘We’ve completely rewritten the textbooks about Saturn.’