Saturn’s 27 degree tilt was caused by the gas giant’s moons moving farther away with most of the pull coming from Titan and the lean is set to DOUBLE in a few billion years, study reveals

Saturn circles the sun on a 27 degree tilt that experts now believe could be caused its moons and especially Titan, the planet’s largest moon.

Previous work found Saturn’s natural satellites are moving away faster than previously believed and by adding this increased migration rate to new calculations, researchers determined this is causing the planet to tilt more and more – and will double in a few billion years.

Calculations show that just about one billion years ago, the moon’s triggered a resonance phenomenon that sent Saturn’s axis interacting with the path of Neptune and gradually tilted until it reached the inclination observed today. 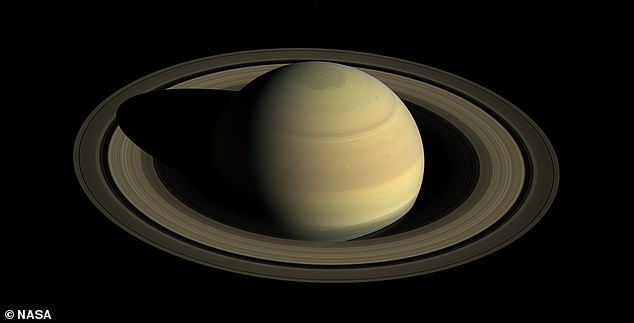 Previous work found Saturn’s natural satellites are moving away faster than previously believed and by adding this increased migration rate to new calculations, researchers determined this is causing the planet to tilt more and more – and will double in a few billion years

Saturn is the sixth planet from the sun and the second largest in the Solar System.

It is known for its dazzling system of rings, but is typically shown on a tilt that has sparked the curiosity of many scientists.

Saturn’s tilt is just slightly larger than that of Mars, but it cases strong seasonal variations on the ringed planet- each lasts for more than seven years.

Now, two scientists from CNRS and Sorbonne University working at the Institute of Celestial Mechanics and Ephemeris Calculation have just shown that the influence of Saturn’s satellites can explain the tilt of the rotation axis of the gas giant. 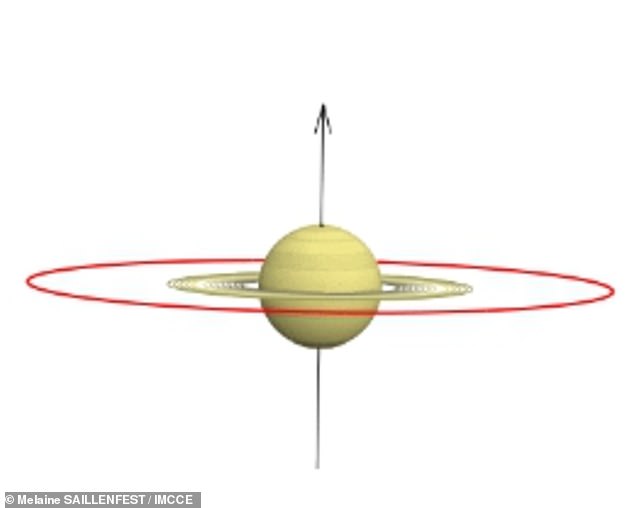 Saturn circles the sun on a 27 degree tilt that experts now believe could be caused its moons and especially Titan, the planet’s largest moon. Pictured is what scientists believe was Saturn’s axis when it formed more than four billion years ago

The team pulled data from previous work published in June 2020 that found Saturn’s moons are migrating faster from Saturn than previously predicted.

However, this report determined the Saturn’s largest moon, Titan, is moving 100 times faster and is believed to have formed much closer 4.5 billion years ago.

And as Titan moves, it is pulling Saturn more and more on a tilt. 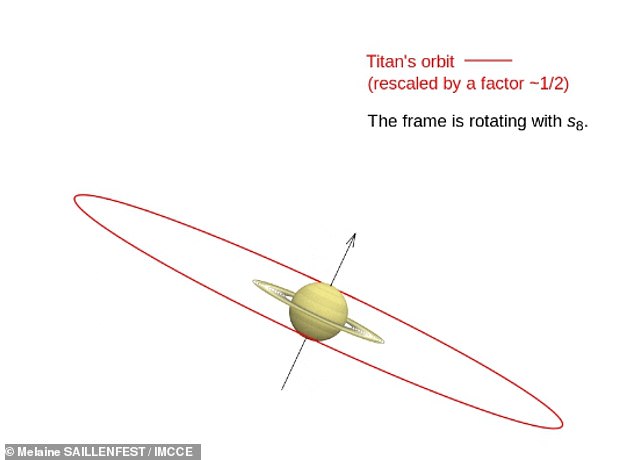 The team also found that the decisive event that tilted the ringed gas giant occurred relatively recently. Calculations show that just about one billion years ago (pictured), the moon’s triggered a resonance phenomenon that sent Saturn’s axis interacting with the path of Neptune 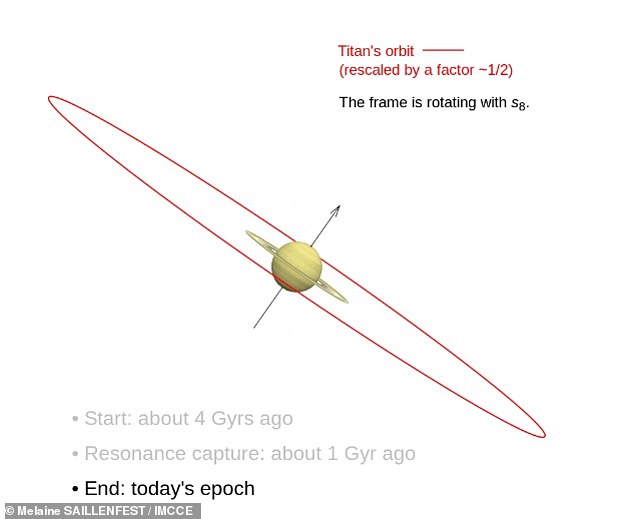 The axis gradually tilted until it reached today’s 27 degrees

The latest study led researchers to find the latest event that titled Saturn.

Scientists previously speculated it occurred over four billion years ago, due to a change in Neptune’s orbit and since then, Saturn’s axis was thought to hav been stable.

‘In fact, Saturn’s axis is still tilting, and what we see today is merely a transitional stage in this shift,’ researchers shard in a statement.

‘Over the next few billion years, the inclination of Saturn’s axis could more than double.’

The research team had already reached similar conclusions about the planet Jupiter, which is expected to undergo comparable tilting due to the migration of its four main moons and to resonance with the orbit of Uranus: over the next five billion years, the inclination of Jupiter’s axis could increase from 3° to more than 30°.

WHAT DID CASSINI DISCOVER DURING ITS 20-YEAR MISSION TO SATURN?

An artist’s impression of the Cassini spacecraft studying Saturn

In 2000 it spent six months studying Jupiter before reaching Saturn in 2004.

In that time, it discovered six more moons around Saturn, three-dimensional structures towering above Saturn’s rings, and a giant storm that raged across the planet for nearly a year.

On 13 December 2004 it made its first flyby of Saturn’s moons Titan and Dione.

On 24 December it released the European Space Agency-built Huygens probe on Saturn’s moon Titan to study its atmosphere and surface composition.

There it discovered eerie hydrocarbon lakes made from ethane and methane.

In 2008, Cassini completed its primary mission to explore the Saturn system and began its mission extension (the Cassini Equinox Mission).

In 2010 it began its second mission (Cassini Solstice Mission) which lasted until it exploded in Saturn’s atmosphere.

In December of the following year it tracked the transit of Venus to test the feasibility of observing planets outside our solar system.

In March 2013 Cassini made the last flyby of Saturn’s moon Rhea and measured its internal structure and gravitational pull.

Cassini didn’t just study Saturn – it also captured incredible views of its many moons. In the image above, Saturn’s moon Enceladus can be seen drifting before the rings and the tiny moon Pandora. It was captured on Nov. 1, 2009, with the entire scene is backlit by the Sun

In July of that year Cassini captured a black-lit Saturn to examine the rings in fine detail and also captured an image of Earth.

In April of this year it completed its closest flyby of Titan and started its Grande Finale orbit which finished on September 15.

‘The mission has changed the way we think of where life may have developed beyond our Earth,’ said Andrew Coates, head of the Planetary Science Group at Mullard Space Science Laboratory at University College London.

‘As well as Mars, outer planet moons like Enceladus, Europa and even Titan are now top contenders for life elsewhere,’ he added. ‘We’ve completely rewritten the textbooks about Saturn.’