Shutting schools at the start of the coronavirus pandemic shortened the average child’s lifespan by almost three months, a study claims.

Academics at the Seattle Children’s Research Institute reviewed data from various studies and databases and found 24.2 million children aged 5 to 11 years attended public schools in the US that were closed during the pandemic.

On average each pupil lost 54 days of instruction – the equivalent of almost 11 weeks of schooling.

As a result, the researchers say a total of 5.53 million years of life have been lost among primary school age children.

For the 24 million affected children, this equates to 23 per cent of a year, or 83 days, just less than three months.

Researchers say ‘restoring access to in-person primary school education should be an immediate priority’ for politicians. 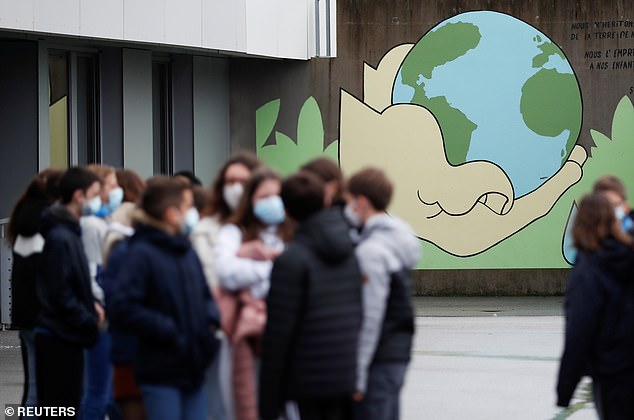 Shutting schools at the start of the coronavirus pandemic shortened the lives of the average child by almost three months, a study claims. Researchers say ‘restoring access to in-person primary school education should be an immediate priority’ (file photo)

The findings correlated the loss of academic achievement with the impact on lifespan.

Based on the 2018 American Census Survey (ACS), the average public-school educated student amasses a total of 13.7 years of schooling.

‘We estimated that primary school–aged boys could lose, approximately 0.15 final years of education as a result of school closure, whereas girls could lose 0.12 years,’ the researchers write.

‘These losses in education were associated with a mean loss of life of 0.31 years for boys and 0.21 for girls.’

The researchers, led by Dr Dimitri Christakis, say there is a 98 per cent probability that the decisions to close US primary schools in March of 2020 cost more years of life than if these schools had remained open.

This would be true even if schools remaining open had led to a substantial increase in the rate of death observed during the early phase of the pandemic, the researchers claim.

The findings are published in JAMA Network Open.

In the new study, the researchers slam the debate around the closing of schools, saying it often ‘lacked nuance’.

‘To our knowledge, very little discussion has considered the very different outcomes and costs associated with school closure for children at different ages and developmental stages,’ the authors write.

SAGE expert warns classrooms may have to close to control Covid

Keeping schools open during the November lockdown in England could mean infection rates stay higher for longer than when nationwide restrictions were first introduced in March, a leading scientist has warned.

Former chief scientific adviser Sir Mark Walport said the new restrictions were not as ‘severe’ as the first time round, and that there was a ‘possibility’ the restrictions may need to stay in place for more than four weeks.

In an interview with Sky’s Sophy Ridge On Sunday, he warned: ‘It’s unlikely this time to come down quite as fast as it did during the first lockdown because we have got schools open.’

‘Based on the existing evidence regarding the limited role primary school–aged children play in transmission of COVID-19 and the heavy burden of decreased educational exposure on their health, we believe that restoring access to in-person primary school education should be an immediate national priority, even while the country awaits a vaccine.’

Policymakers worldwide drew criticism for what was perceived as a hasty decision.

However, former chief scientific adviser Sir Mark Walport is among the experts who say schools may have to close again to curb transmission.

In an interview with Sky’s Sophy Ridge On Sunday, he warned: ‘It’s unlikely this time to come down quite as fast as it did during the first lockdown because we have got schools open.’

His comments were echoed by Sir Jeremy Farrar, a member of the Government’s Scientific Advisory Group for Emergencies (Sage), who said transmission in secondary schools is ‘high’.

He told BBC One’s The Andrew Marr Show: ‘The big difference to the first lockdown is that schools remain open.

‘Because we have delayed the onset of this lockdown it does make keeping schools open harder.

‘We know that transmission, particularly in secondary schools is high.’