Been dumped? Here’s why! Scientists reveal six key ‘red flags’ in relationships – including being gross, clingy or promiscuous

Getting dumped is never great, but if it appears to come out of the blue, this can make it even harder to accept.

Fortunately, scientists have revealed the six biggest ‘red flags’ in relationships, to help you get to the bottom of what may have gone wrong.

These are being clingy, promiscuous, unmotivated, apathetic, ‘gross’ and addicted to drugs.

‘What people want may only be one part of mate choice, with people also eliminating potential partners possessing dealbreakers,’ the researchers wrote in their study, published in Personality and Individual Differences. 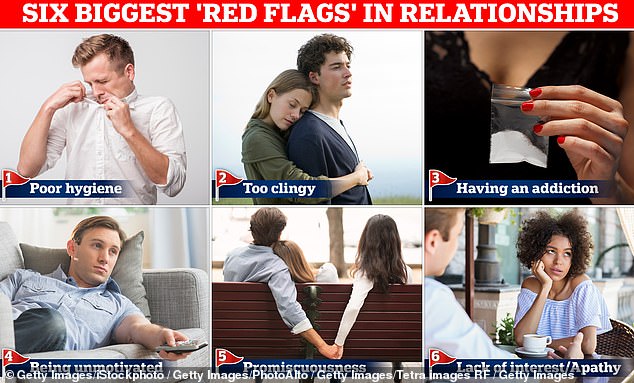 Scientists have revealed the six biggest ‘red flags’ that people see as relationship dealbreakers. These are being clingy, promiscuous, unmotivated, apathetic and ‘gross’ 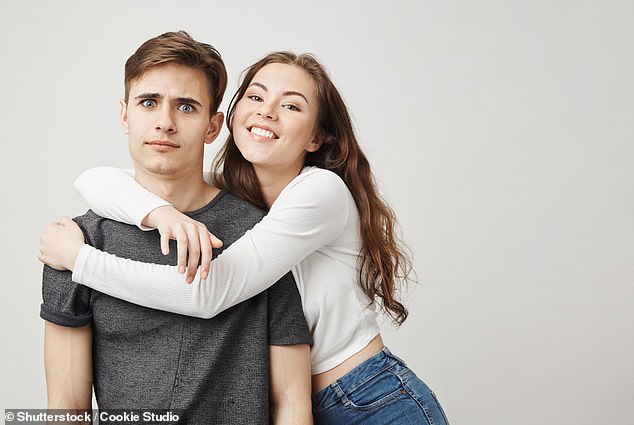 Being clingy is one of the biggest turn offs in the short-term, and the researches say this is because it inhibits a partner’s nonparental reproductive efforts (stock image)

Gross – The person has poor personal hygiene, smells bad, is ‘unattractive’ or has health issues like STDs.

Addicted – The person has alcohol or drug problems, smokes or has a criminal past.

Clingy – The person is controlling, clingy or too jealous.

Apathetic – The person is inattentive or uncaring, untrustworthy or dismissive of your interests.

Unmotivated – The person lacks ambition, has poor financial prospects, is too passive about life or has different moral views to you.

In the study, researchers analysed existing research on relationship dealbreakers which listed 49 of them.

They asked 285 university students to indicate which of these would make them lose interest in a short or long-term relationship.

This revealed that lack of interest was likely to put an end to a long-term relationship, as this shows a lack of parental ability.

However, being clingy is one of the biggest turn offs in the short-term, and the researchers say this is because it inhibits a partner’s nonparental reproductive efforts – in other words, casual sex.

Unsurprisingly, poor personal hygiene was also a significant dealbreaker for relationships of any length.

The researchers, from Charles University in the Czech Republic, University of Colorado in the USA and University of Padua in Italy, wrote: ‘From an evolutionary point of view, our dealbreakers confirm long-standing theories on what is important in a potential partner.

‘People want mates who are fertile (i.e., not smelling bad, not having STDs, being attractive) and good parents (i.e., being trustworthy, ambitious, attentive, caring) of our offspring.

A 2015 study from Western Sydney University identified the original 49 relationship dealbreakers, but did not perform further analysis.

However, the international team hypothesised that the actual list of dealbreakers would be smaller than that, and would be composed of features that ‘impose costs on people’.

This could include threats of sexually transmitted disease, relationship threats like infidelity and personality problems like insecurity. 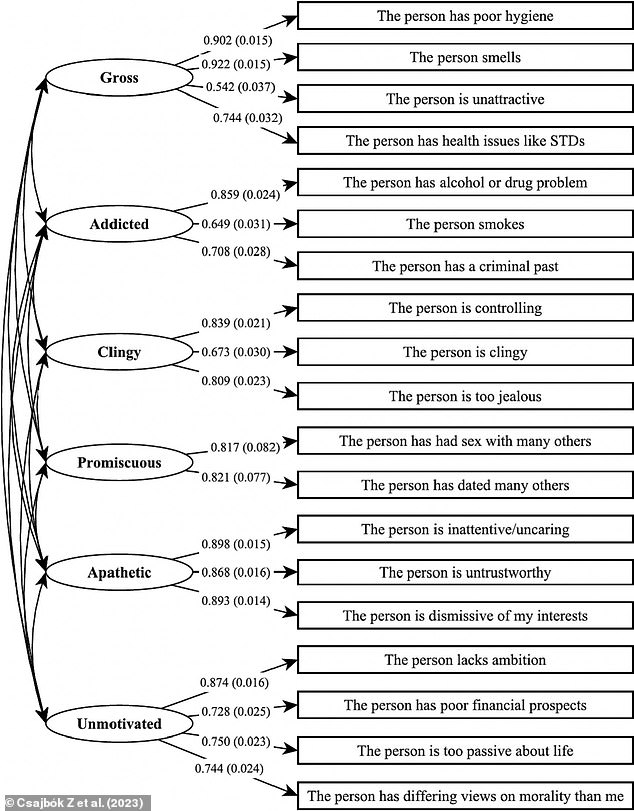 Students rated each of the 49 ‘dealbreakers’ from a previous study on how strongly they regarded them as a dealbreaker in short-term and long-term relationships. The researchers used statistical analysis to classify all the dealbreakers into six main factors (pictured) 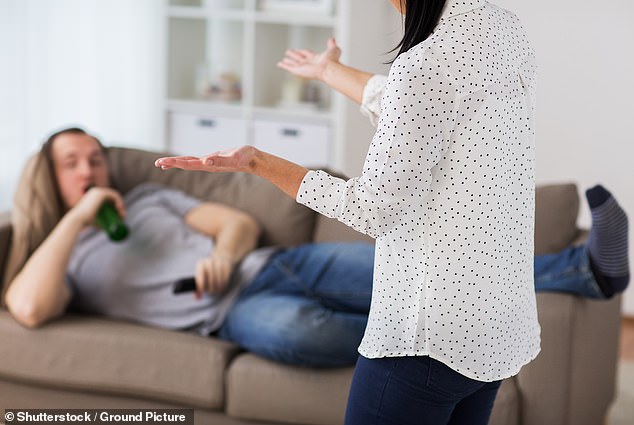 For their new study, they recruited the students, with an average age of 22, to help narrow them down.

They completed three tests, where the first two highlighted how important different traits were to them and how open they were in a relationship.

The third involved them rating each of the 49 items on how strongly they regarded them as a dealbreaker in short-term and long-term relationships.

They were presented as ‘bits of information you learn about a person that might make you lose interest in the potential partner’.

Finally, the researchers used their responses and statistical analysis to classify all the dealbreakers into six main factors.

Poor hygiene and unattractiveness both fell in the ‘gross’ category, and the researchers say this could be because they reveal information about the potential mate’s health.

They also found that women had more dealbreakers in each of the six categories than men did.

‘Because women have higher rates of obligatory investment in offspring, women tend to maintain higher standards,’ they wrote.

It was also found that older women see more items that fell under ‘Gross’ or ‘Unmotivated’ as dealbreakers than younger women.

This was seen particularly in the context of short-term relationships for all factors except ‘Clingy’.

Indeed, participants with high ‘mate value’ – ie view themselves as valuable partners – reported more dealbreakers than others in both long and short-term relationships.

As many previous studies have looked deeply at ‘dealmakers’ – a partner’s upsides – the researchers suggest that further work should look into whether these compliment of compete with dealbreakers.

‘The traits that people do not want in a mate may serve as initial culling features, operating before affirmative processes take over,’ they wrote.

Do you speak your partner’s ‘love language’? People who express affection in their other half’s preferred style have stronger relationships, study claims.

Scientists have also found that women steer clear of relationships to avoid fights – while men choose the bachelor life so they have more freedom to FLIRT.

And, research has shown people tell your dating intentions from your WEIGHT, and larger people are seen as more interested in long-term relationships.

WHEN YOU SHOULD BREAK UP WITH YOUR PARTNER

People in these kinds of relationships should make informed decisions about either staying together once and for all or terminating their relationship.

1. When considering rekindling a relationship that ended or avoiding future breakups, partners should think about the reasons they broke up to determine if there are consistent or persistent issues impacting the relationship.

2. Having explicit conversations about issues that have led to break ups can be helpful, especially if the issues will likely reoccur. If there was ever violence in the relationship, however, or if having a conversation about relationship issues can lead to safety concerns, consider seeking support-services when it is safe to do so.

4. Remember that it is okay to end a toxic relationship. For example, if your relationship is beyond repair, do not feel guilty leaving for your mental or physical well-being.

5. Couples therapy or relationship counselling is not just for partners on the brink of divorce. Even happy dating and married couples can benefit from ‘relationship check-ups’ in order to strengthen the connection between partners and have additional support in approaching relationship transitions.