A loud sonic boom was heard over north London in the morning hours of Sunday, December 1. Around 4am GMT, witnesses flooded to Twitter and social media to report an explosion-like bang from North London to Hertfordshire. The Ministry of Defence has since confirmed the explosion was triggered by RAF planes flying past the capital.

The MoD said two Typhoon fighter jets were scrambled around 4.09am GMT.

The jets were launched from RAF Coningsby to intercept an aeroplane not responding to traffic control.

The MoD said: “Two Typhoon fighter aircraft from RAF Coningsby were scrambled at 0409 this morning, as part of the UK’s Quick Reaction Alert (QRA) procedures, after an aircraft lost communications in UK airspace.

“The aircraft was intercepted and its communications were subsequently re-established. The Typhoons are returning to their base.” 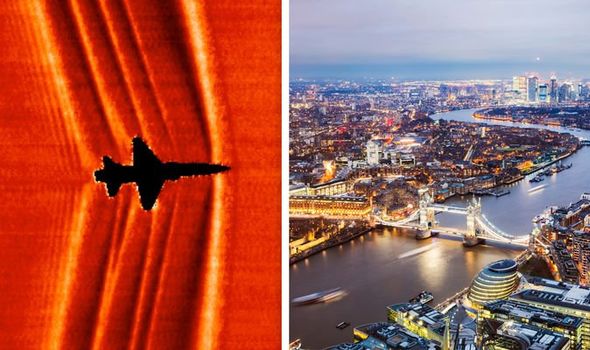 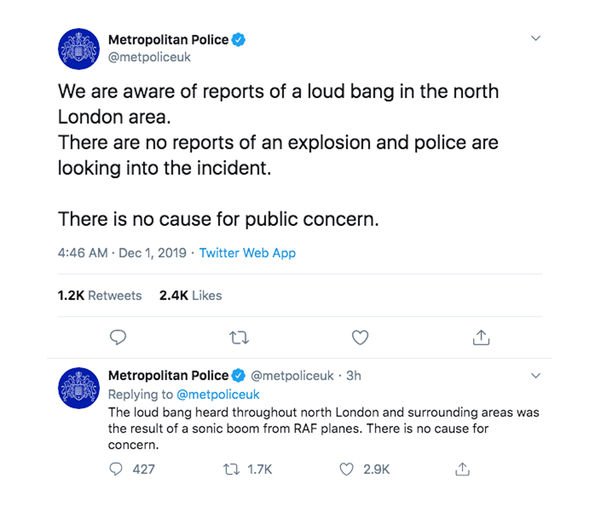 At 4.46am GMT, the Met Police also assured on Twitter there were no reports of an explosion going off in London.

The Met Police tweeted: “We are aware of reports of a loud bang in the north London area.

“There are no reports of an explosion and police are looking into the incident. There is no cause for public concern.”

The Met Police then tweeted at 4:59am GMT: “The loud bang heard throughout London and surrounding areas was the result of a sonic boom from RAF planes. There is no cause for concern.”

What is a sonic boom? What causes the loud bang and explosion?

A sonic boom is a thunder-like bang triggered by an object going supersonic or faster than the speed of sound.

In this particular case, the bang was triggered by RAF jets breaking the sound barrier.

According to US space agency NASA, supersonic jets displace the air before them much like a boat displaces water.

The bigger and heavier the jet, the more air is rapidly displaced, causing a shockwave.

NASA said: “The shock wave forms a ‘cone’ of pressurised or built-up air molecules, which move outward and rearward in all directions and extend all the way to the ground. 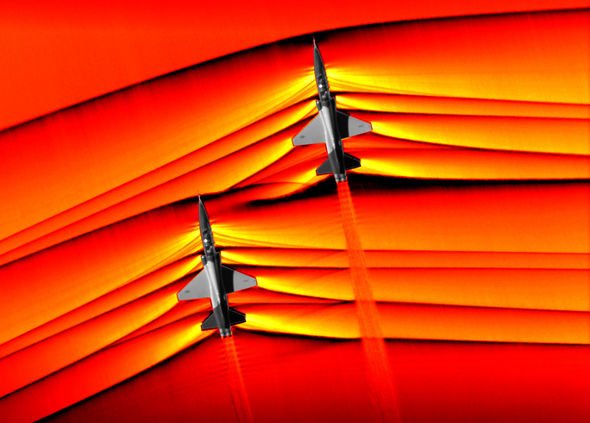 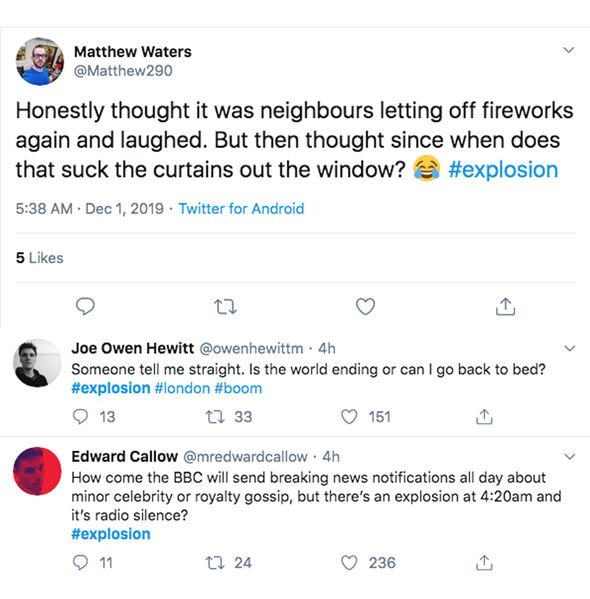 “As this cone spreads across the landscape along the flight path, it creates a continu­ous sonic boom along the full width of the cone’s base.

“The sharp release of pressure, after the buildup by the shock wave, is heard as the sonic boom.”

The change in air pressure is comparable to an elevator riding down two or three floors.

However, NASA said it is the sudden change of air pressure that makes the sonic boom an audible bang.

How did people react to the London sonic boom?

Matthew Waters said on Twitter: “Honestly thought it was neighbours letting off fireworks again and laughed.

And Joe Owen Hewitt said: “Someone tell me straight. Is the world ending or can I go back to bed? #explosion #london #boom”