In what could be a historic first, a US space company will attempt to catch a rocket falling back to Earth using a helicopter.

The mid-air capture has been tried before, albeit unsuccessfully by NASA in 2004, but if it works it could provide a dramatic advancement in launch capabilities and a new way for rocket launchers to be reused.

The ‘There and Back Again’ mission, which will be the company’s 26th Electron rocket launch, will see 34 satellites deployed to Earth orbit, including one to monitor our planet’s light pollution. 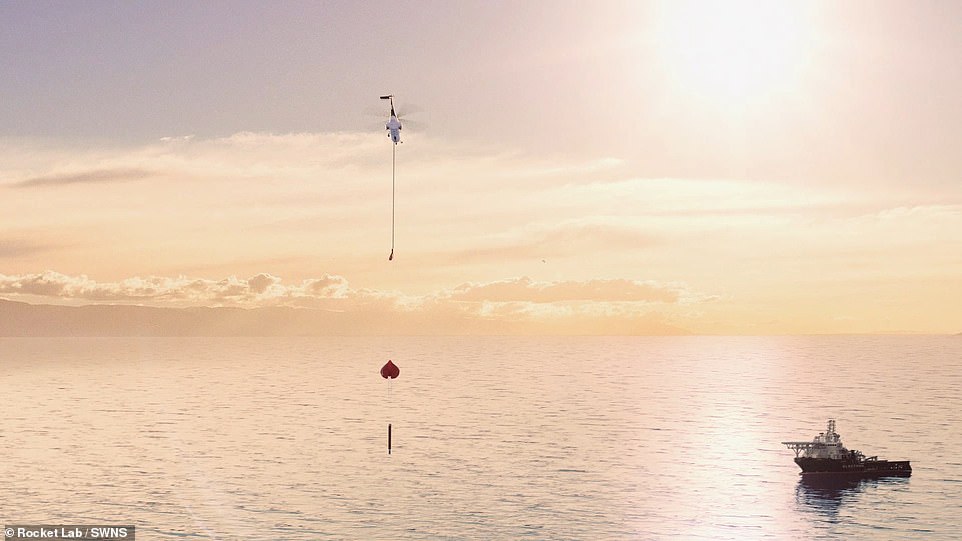 It may sound like an ambitious ask, but in what could be a historic first a US space company will attempt to catch a rocket falling back to Earth using a helicopter (pictured in an artist’s impression) 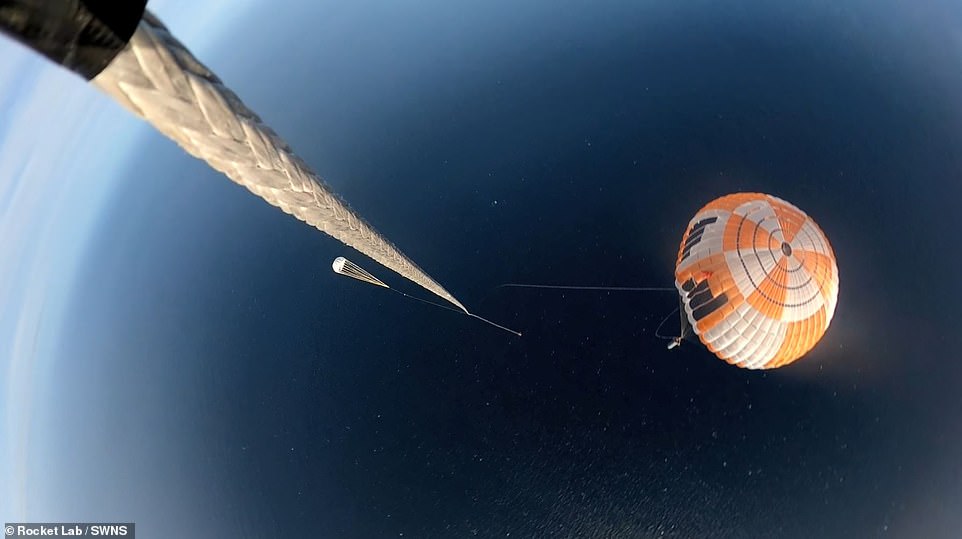 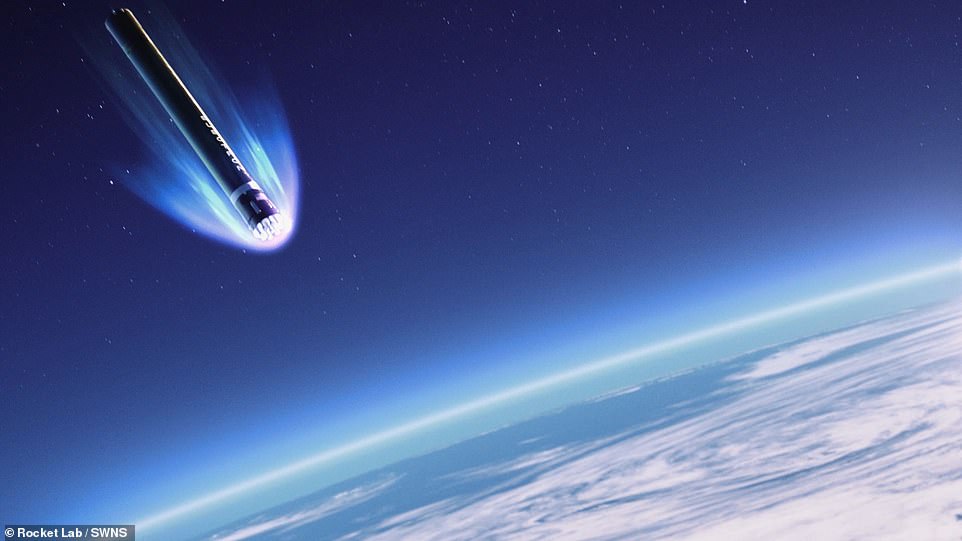 The mid-air capture has been tried before, albeit unsuccessfully by NASA in 2004, but if it works it could provide a dramatic advancement in launch capabilities 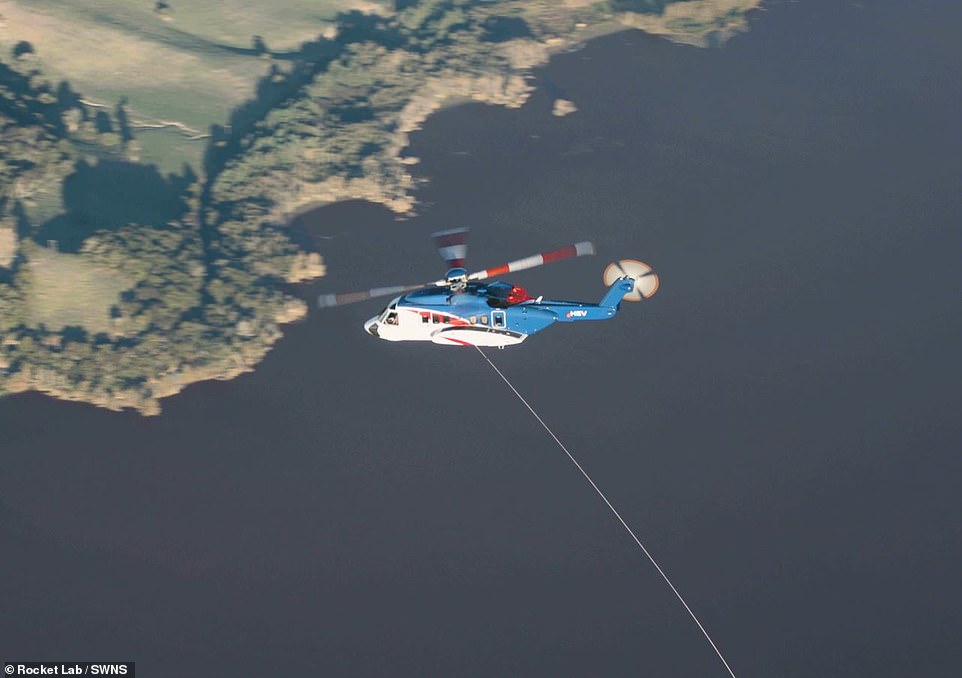 The launch is scheduled to take place tomorrow (Friday) from Rocket Lab’s complex on New Zealand’s Mahia Peninsula. As the first stage of the rocket falls back to Earth, Rocket Lab will then attempt to catch it with a customised Sikorsky S-92 (pictured). The large twin engine helicopter is used in offshore oil and gas transport, as well as in search and rescue operations

Two and a half minutes after launching, the first and second stages of the rocket will separate.

The latter will continue to orbit, while the first stage will plummet to Earth at speeds of more than 5,000 mph (8,000 kph).

It will have to endure temperatures of 4,352°F (2,400°C) before deploying a parachute to slow its descent to around 22 mph (35 kph) as it enters a ‘capture zone’ above the Pacific.

Rocket Lab will then attempt to catch the rocket with a customised Sikorsky S-92, a large twin engine helicopter used in offshore oil and gas transport, as well as in search and rescue operations.

It will try to latch on to the parachute with a hook, with the capture expected about 18 minutes after launch, and if successful the rocket will then be transported back to land for possible reuse on another mission.

‘Catching a returning rocket stage mid-air as it returns from space is a highly complex operation that demands extreme precision,’ the company said.

Unlike billionaire Elon Musk’s SpaceX, which has the Falcon 9 rocket land on a drone ship, Rocket Lab has been bolder in its recovery effort.

Like previous recovery missions, Electron’s first stage will undertake a series of complex manoeuvres designed to enable it to survive the extreme heat and forces of atmospheric re-entry.

The small rocket will be equipped with a heat shield to protect its nine Rutherford engines, as well as a parachute to slow it down enough so that Rocket Lab’s helicopter can catch it.

If successful, the company would be one step closer to making Electron the first reusable orbital small sat launcher.

The satellites are being transported for customers including Alba Orbital, Astrix Astronautics, Aurora Propulsion Technologies, E-Space, Spaceflight Inc., and Unseenlabs, bringing the total number of satellites launched by Electron to 146.

‘We’re excited to enter this next phase of the Electron recovery program,’ said Rocket Lab founder and CEO, Peter Beck.

‘We’ve conducted many successful helicopter captures with replica stages, carried out extensive parachute tests, and successfully recovered Electron’s first stage from the ocean during our 16th, 20th, and 22nd missions.

‘Now it’s time to put it all together for the first time and pluck Electron from the skies.’

He added: ‘Trying to catch a rocket as it falls back to Earth is no easy feat, we’re absolutely threading the needle here, but pushing the limits with such complex operations is in our DNA.

‘We expect to learn a tremendous amount from the mission as we work toward the ultimate goal of making Electron the first reusable orbital small sat launcher and providing our customers with even more launch availability.’

Rocket Lab has previously carried out three successful ocean recovery missions where Electron returned to Earth under parachute and was recovered from the ocean.

Analysis of those missions helped throw up design modifications to Electron, enabling it to withstand the hard re-entry environment.

It also helped to developed procedures for a recent test that saw its helicopter capture a dummy rocket.

Approximately an hour prior to lift-off, Rocket Lab’s Sikorsky S-92 will move into position in the capture zone, around 150 nautical miles off New Zealand’s coast, to await launch. 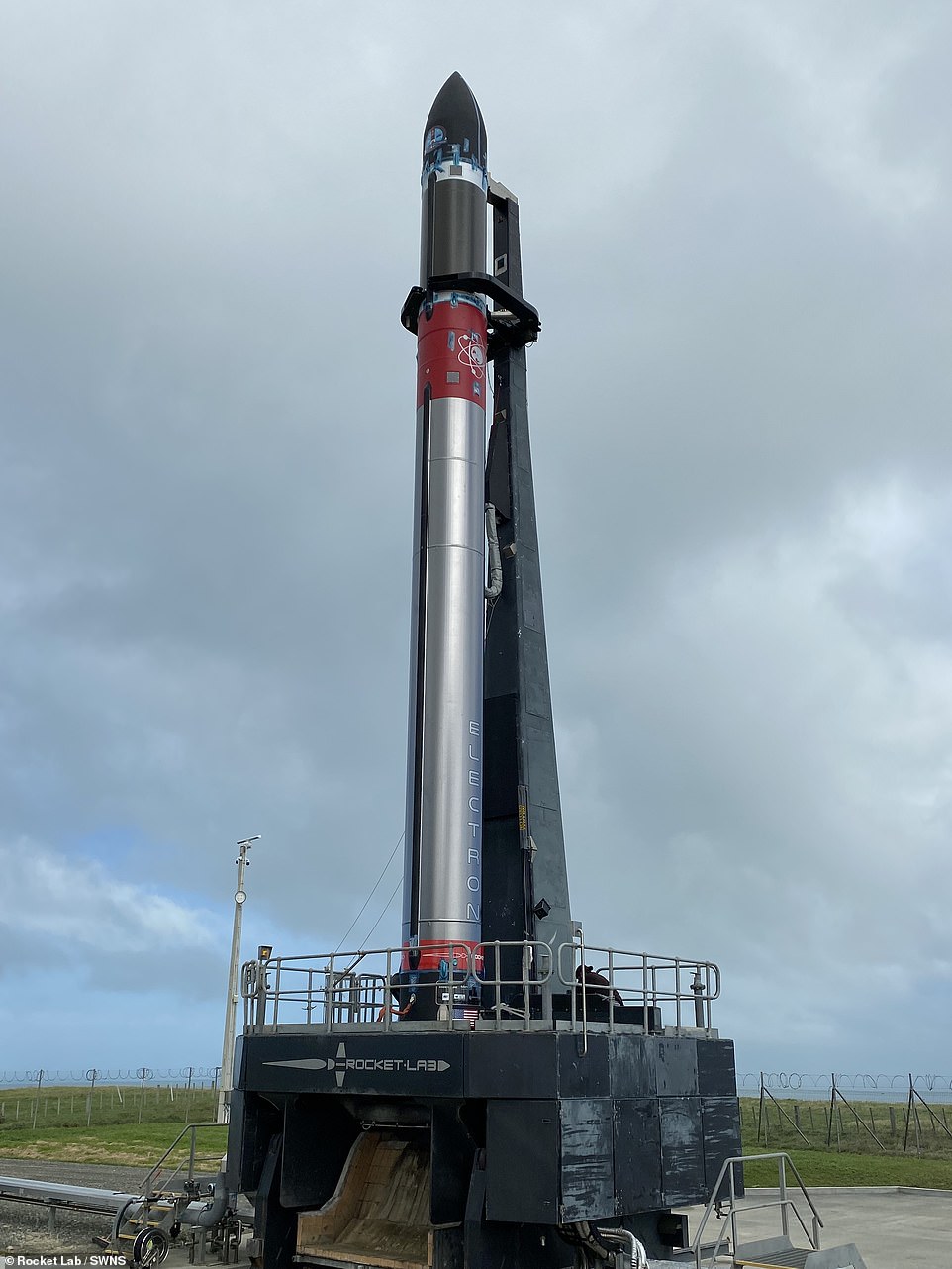 If successful, Rocket Lab would be one step closer to making Electron (pictured) the first reusable orbital small sat launcher 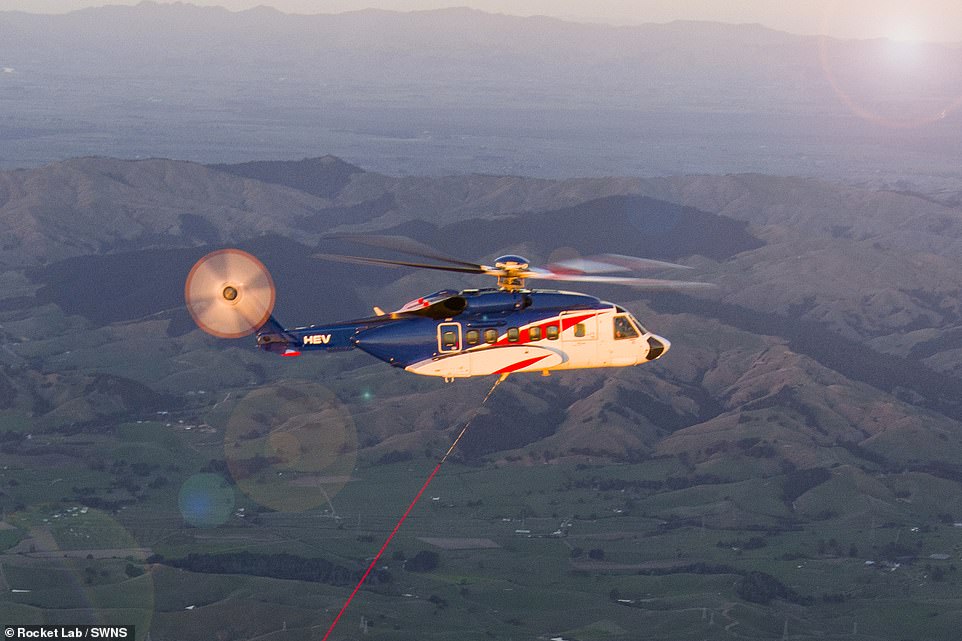 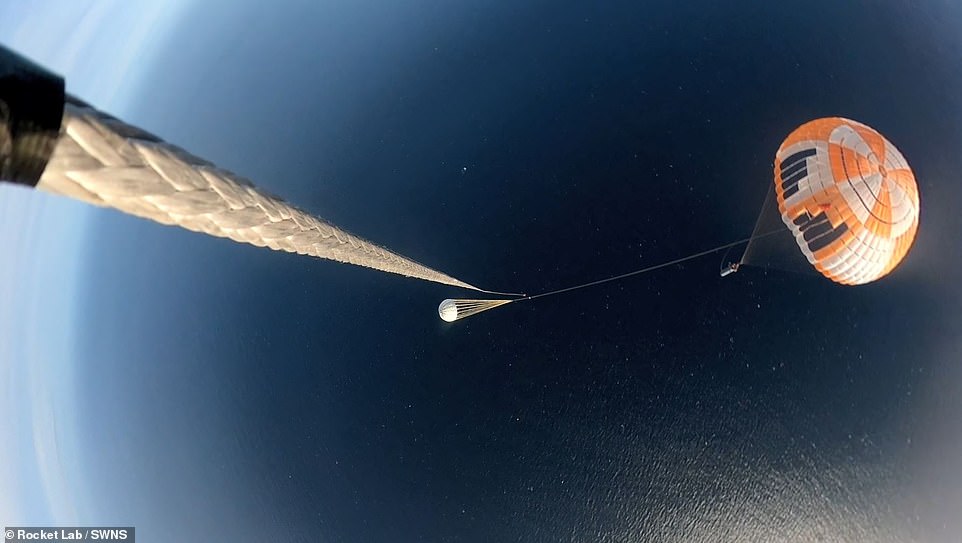 Analysis of those missions helped throw up design modifications to Electron, enabling it to withstand the hard re-entry environment 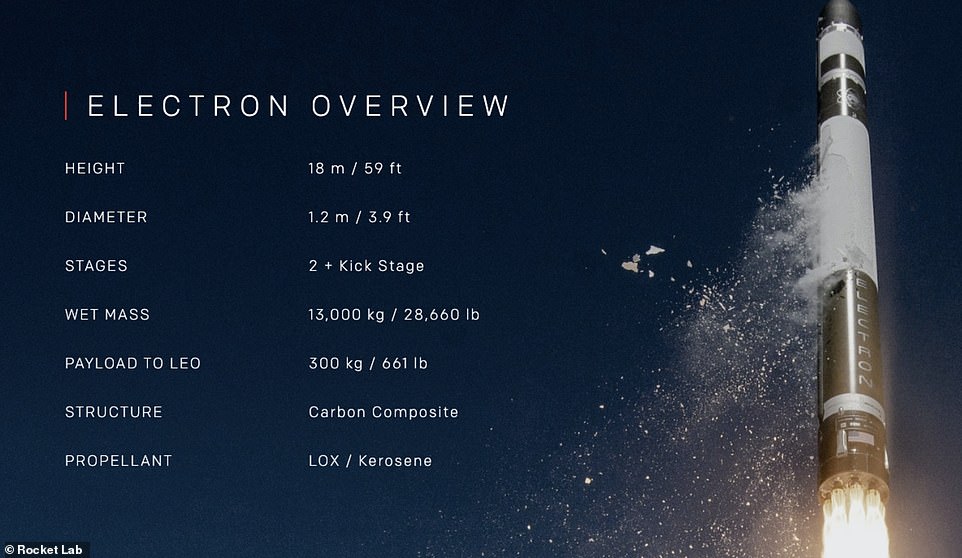 It is a flight known as the ‘There and Back Again’ mission, Rocket Lab’s 26th Electron launch, sending 34 payloads from a range of commercial operators

At T+2:30 minutes after lift-off, Electron’s first and second stages will separate per a standard mission profile.

Electron’s second stage will continue on to orbit for payload deployment and Electron’s first stage will begin its descent back to Earth.

As the stage enters the capture zone, Rocket Lab’s helicopter will attempt to rendezvous with the returning stage and capture the parachute line via a hook.

Once the stage is captured and secured, the helicopter will transport it back to land where Rocket Lab will conduct a thorough analysis of the stage and assess its suitability for reflight.

Mid-air capture was previously attempted with NASA’s Genesis spacecraft in 2004.

Hollywood stunt pilots had been waiting to catch the capsule to give its cargo a special soft landing, but the spacecraft’s parachutes failed to open and it crash-landed in the Utah desert.

It was carrying captured particles blown off the sun, which were damaged in the impact.

Each small satellite carries a unique sensor designed to demonstrate innovative technologies on orbit. Unicorn-2 will be carrying an optical night-time imaging payload designed to monitor light pollution across the globe.

The mission aims to demonstrate the high performance of Copia’s novel design via -on-orbit testing with 1U solar arrays able to capture up to 200W.

Aurora Propulsion Technologies: The AuroraSat-1 also known as The Flying Object will deploy to low Earth orbit in a demonstration of the company’s proprietary propulsion devices and plasma brakes that provide efficient propulsion and deorbiting capabilities for small satellites.

The CubeSat will validate the water-based propellant and mobility control of its Resistojets that can assist CubeSats with detumbling capabilities and propulsion-based attitude control.

AuroraSat-1 will also test its deployable Plasma Brakes which combine a micro-tether with charged particles in space, or ionospheric plasma, to generate significant amounts of drag to deorbit the spacecraft safely at the end of its life.

E-Space: E-Space’s payload will consist of three demonstration satellites to validate the systems and technology for its sustainable satellite system.

The satellites have small cross-sections, to decrease the risk of collision from the millions of untrackable space objects and will automatically de-orbit if any systems malfunction.

Eventually, the satellites will sacrificially capture and deorbit small debris to burn up on re-entry, setting a new standard in space environmental management.

UNSEENLABS: BRO-6 is the sixth satellite of the Unseenlabs’ constellation, dedicated to the detection of radiofrequency signals.

Thanks to its technology, the French company detects any vessel at sea, even those whose cooperative beacon is turned off.

The launch of BRO-6 satellite will allow Unseenlabs to improve its revisit time and deliver more customers.