SpaceX just returned its first full astronaut crew to Earth, completing the longest human spaceflight any US vehicle has ever flown.

The astronauts of the Crew-2 mission — Shannon Walker, Victor Glover, and Mike Hopkins of NASA, and Soichi Noguchi of the Japan Aerospace Exploration Agency (JAXA) — felt the pull of Earth’s gravity for the first time in six months as their Crew Dragon spaceship tore through the atmosphere early Sunday. The spaceship, which they’ve named Resilience, protected them as its speed superheated the air around it to a 3,500-degree-Fahrenheit plasma.

A few miles above the ocean, four parachutes ballooned from the gumdrop-shaped capsule, jerking it into a slower fall. They gently lowered Resilience to a splashdown in the Gulf of Mexico at 2:57 a.m. ET. The waves were calm and the weather was clear.

This was NASA’s first nighttime splashdown since 1968. Thermal cameras on a nearby recovery ship and a NASA plane captured video, below, of the spaceship and its parachutes falling into the ocean.

“On behalf of NASA and the SpaceX teams, we welcome you back to planet Earth. Thanks for flying SpaceX. For those of you enrolled in our frequent flyer program, you have earned 68 million miles on this voyage,” a mission controller quipped to the Crew-1 astronauts as they splashed down.

“We’ll take those miles. Are they transferable?” Hopkins responded.

The astronauts’ return to Earth concludes SpaceX’s first routine crewed mission to the International Space Station (ISS). That’s where Walker, Glover, Hopkins, and Noguchi have been living and working since they launched in November.

SpaceX first proved it could launch and land humans last year when it rocketed NASA astronauts Bob Behnken and Doug Hurley to the ISS for a two-month test flight. Now it has shown that it can carry out full-length crew rotations. 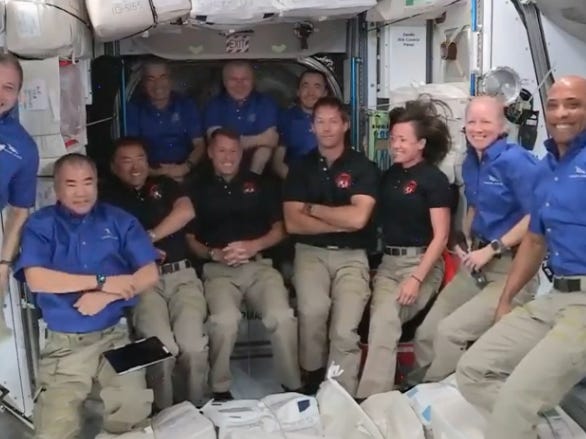 NASA has contracted five more round-trip flights from SpaceX. The next one, Crew-2, already delivered four more astronauts to the ISS last weekend. Walker, Glover, Hopkins, and Noguchi greeted their Dragon-flying colleagues with smiles and hugs. The football-field-sized orbiting laboratory was crowded with 11 people during the week that the two missions overlapped.

But on Saturday evening, the Crew-1 astronauts said goodbye and climbed back into the Crew Dragon Resilience.

The capsule undocked from its ISS port and fell into orbit around Earth, slowly lining up with a path to its splashdown site over the next 6.5 hours.

“This marks many important milestones, but it really is important for getting a regular cadence of crew to the station and back,” Steve Jurczyk, NASA’s acting administrator, said after the Crew-2 launch.

“What we do on ISS is important not only for the research and technology development that we do for here on Earth but also to prepare for what we’re going to do in the future,” he added. “Our ultimate goal is sending astronauts to Mars.”

Having fun and making history 250 miles above Earth 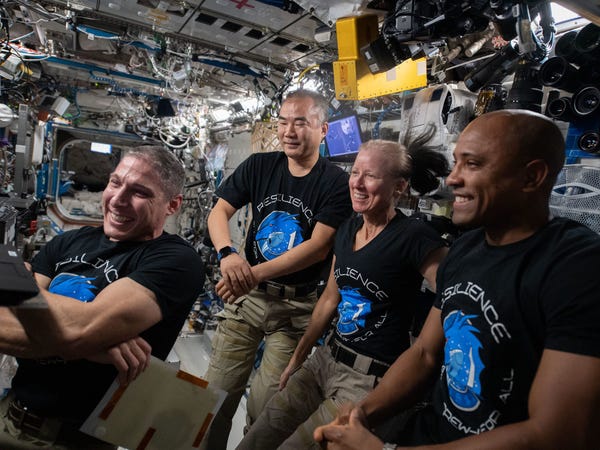 Walker, Glover, Hopkins, and Noguchi conducted hundreds of science and technology experiments during their time in orbit. They did a few spacewalks. They also relocated the Crew Dragon from one ISS docking port to another — a first for the spacecraft.

The crew celebrated Glover’s 45th birthday on Friday, their last full day on the ISS. The party featured cake, musical instruments, and balloons.

“Gratitude, wonder, connection. I’m full of and motivated by these feelings on my birthday, as my first mission to space comes to an end,” Glover, who is the mission pilot, tweeted. “This orbiting laboratory is a true testament to what we can accomplish when we work together as a team. Crew-1 is ready for our ride home!”

Glover was a rookie at the beginning of this mission, but Noguchi is a spaceflight veteran. He’s spent more than a year of his life in space and has flown on three different spacecraft. He said after the launch that Crew Dragon was the best. 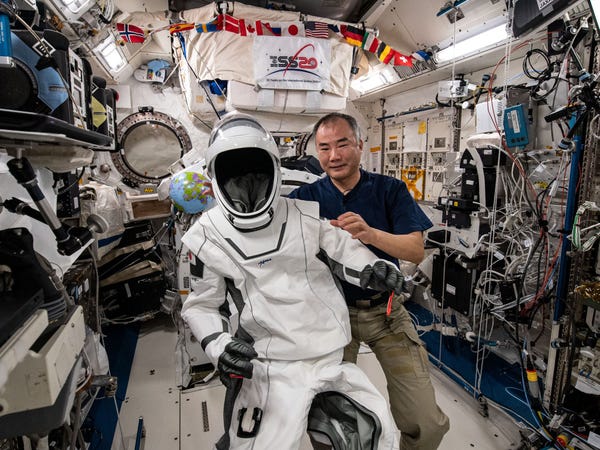 Hopkins, the mission commander, has had to sleep inside the spaceship for the last five months since the ISS didn’t have enough beds. That gave him the only room with a window 250 miles above Earth. The views were “absolutely stunning,” he told reporters last week.

As their departure date approached, the astronauts wondered what the Crew Dragon had in store for them.

“We don’t know quite what to expect landing on the water under parachutes like this,” Walker said. “And it’s just exciting that we get to go home and see our friends and family.” 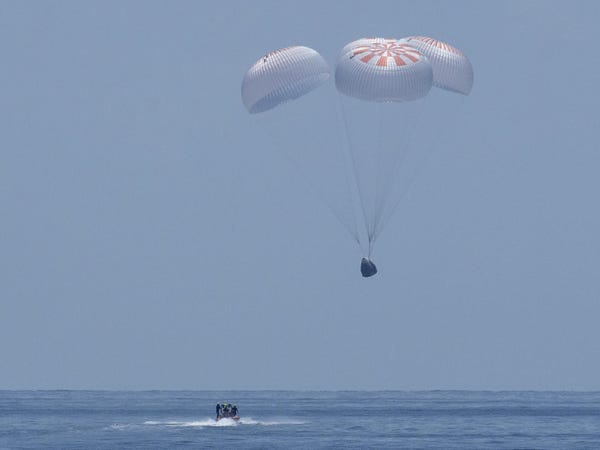 Their return trip was originally scheduled for Wednesday, then for Saturday morning, but NASA rescheduled twice after forecasts predicted high winds in the splashdown zones.

Akihiko Hoshide, a JAXA astronaut on Crew-2, has taken over the role of ISS commander. He spoke to the Crew-1 astronauts over the radio as their spaceship backed away from the station: “Resilence departed. Have a safe trip back home and a soft landing.”

“Thanks for your hospitality,” Hopkins responded. “Sorry, we stayed a little bit long. And we’ll see you back on Earth.”

‘A new era of space exploration’ 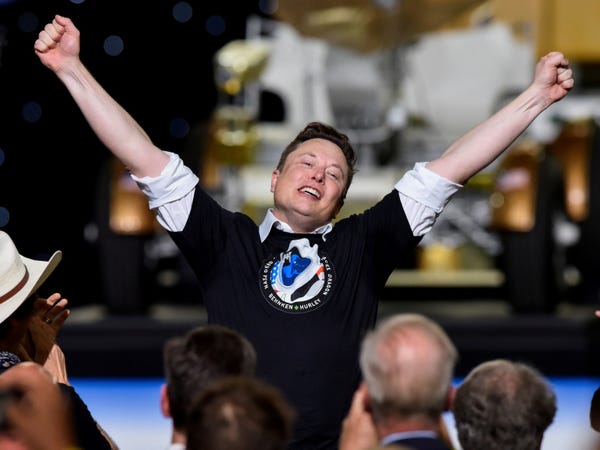 NASA shares its Mars ambitions with Elon Musk, the founder, CEO, and chief engineer of SpaceX. So far, SpaceX seems to be the agency’s first-choice commercial partner in expanding human spaceflight.

NASA recently chose the company’s Starship mega-spaceship to land astronauts on the moon for the first time since 1972. However, work has been temporarily halted after competing firms Dynetics and Blue Origin filed complaints.

“The future’s looking good,” Musk said in a press conference after the Crew-2 launch. “I think we’re at the dawn of a new era of space exploration.”

That era begins in low-Earth orbit, with the six Crew Dragon missions NASA has purchased. So far, this is the only commercial spaceship ever to fly humans — and it’s done so for three crews. 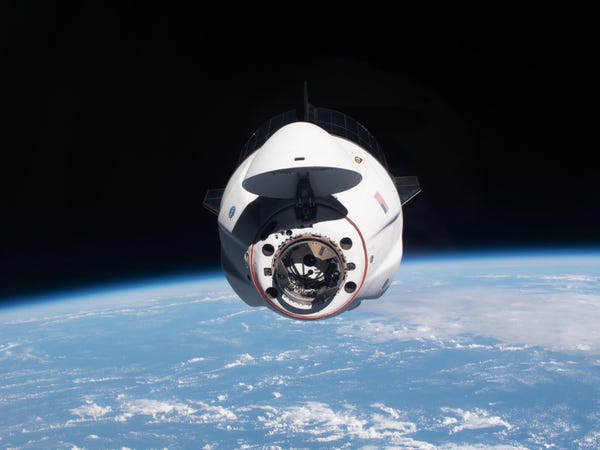 Those missions restored NASA’s ability to launch astronauts from the US for the first time since the last Space Shuttle flew in 2011. The Crew Dragon also gives other space agencies, like JAXA, an alternative to the Russian Soyuz rockets that have dominated human spaceflight for the last decade.

This was what NASA wanted from its Commercial Crew Program, which funded SpaceX to build Crew Dragon and prepare its Falcon 9 rockets for crewed launches. NASA did the same for Boeing’s Starliner spaceship, but that vehicle has to re-do an uncrewed mission to the ISS before it can fly humans.

To the moon and Mars 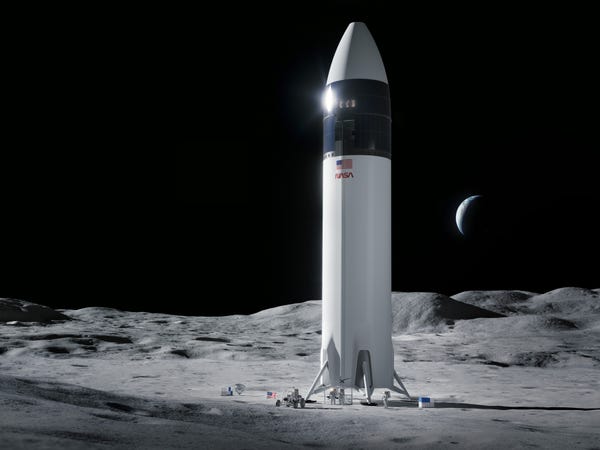 Through the partnerships fostered in the Commercial Crew Program — and using its own mega-rocket, the Space Launch System — NASA aims to put boots on the lunar surface in 2024. Musk has said he thinks this timeline is “doable,” though NASA’s Office of the Inspector General recently determined it is “highly unlikely.”

Whenever it happens, that mission would kick NASA’s Artemis program into full gear. The eventual goal is to establish a permanent human presence on the moon — picture ISS-like orbiting laboratories and research stations on the lunar surface. NASA plans to send human missions to Mars from there.

Musk has his own plans, including building SpaceX’s planned Starship-Super Heavy launch system and using it to build a self-sustaining settlement on Mars. For now, Starship prototypes are still trying to fly and land without exploding. 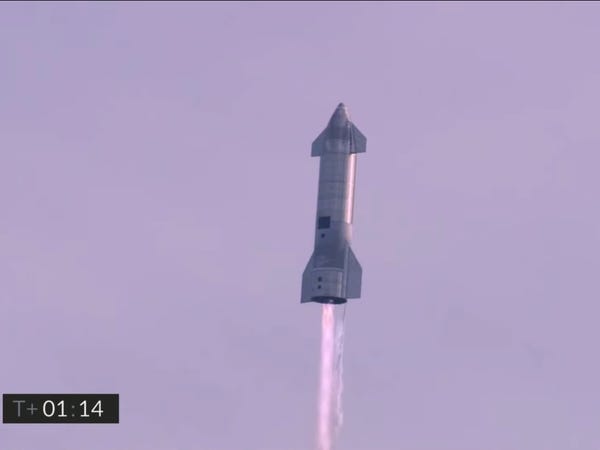 SpaceX also plans to start launching private spaceflight missions for paying customers. The first, set to launch this year, is called Inspiration4. For that flight, billionaire Jared Isaacman purchased four seats on Crew Dragon Resilience — the same capsule that just splashed down in the ocean. He and three other civilians plan to take a three-day joy ride around Earth.

“I think it’s a good thing for human spaceflight to see more and more people getting up into orbit around Earth. It’s just an amazing experience,” Mike Hopkins told reporters in a call from the ISS last week when asked how he felt about civilians flying in the spaceship he’s been commanding.

“As we look to kind of transition low-Earth orbit to the commercial industry, this is a big step along that way. And then NASA can continue to focus on exploration and getting back to the moon and on to Mars.”