The four astronauts will fly SpaceX’s Crew Dragon spacecraft, which demonstrated its spaceflight capabilities in May this year. SpaceX’s Crew-2 mission will be the Dragon’s second operational flight after the Crew-1 launch in mid-September. SpaceX’s Crew-2 is being targetted for launch in spring 2021.

The SpaceX launch will bolster the crew of the International Space Station (ISS), which houses a rotating crew of six astronauts for months at a time.

NASA has partnered with SpaceX and Boeing under the Commercial Crew programme.

Both companies have developed a new generation of American capsules designed to safely ferry humans to and from the ISS.

However, Boeing has fallen behind SpaceX and is yet to launch a crewed test flight of its CST-100 Starliner capsule. 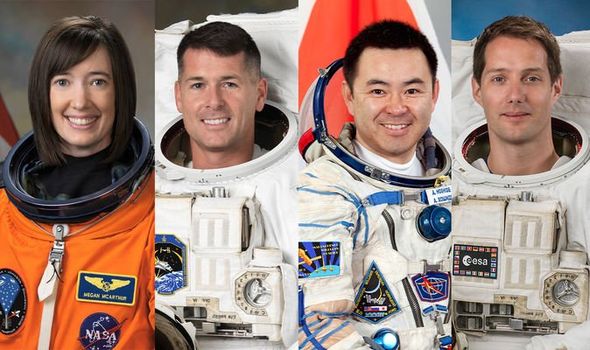 Who are the astronauts of SpaceX and NASA’s Crew-2 mission?

Four astronauts will launch to the ISS in 2021, alongside three crewmates who will launch on a Russian Soyuz spacecraft.

NASA said: “The increase of the full space station crew complement to seven members – over the previous six – will allow NASA to effectively double the amount of science that can be conducted in space.”

Mr Kimbrough, a retired US Army officer, has been to been to space two times so far, including one Space Shuttle flight.

He has spent a total of 189 days in space and has performed six spacewalks.

Dr McArthur is an oceanographer who will be making her second voyage into space.

She earned her wings aboard STS-125, the final space shuttle mission to the Hubble Space Telescope.

NASA said: “McArthur operated the shuttle’s robotic arm over the course of the 12 days and 21 hours she spent in space, capturing the telescope and moving crew members during the five spacewalks needed to repair and upgrade it.”

Mr Hoshide from the Japan Aerospace Exploration Agency (JAXA) has been to space twice.

After completing his astronaut training at NASA, he flew on STS-124 as a Mission Specialist.

The mission, carried out aboard the Space Shuttle Discovery, was the second of three mission to deliver the Japanese Experiment Module (KIBO) to the ISS.

SpaceX’s Crew-2 mission will mark his third flight into space.

Mr Pesquet is a French engineer and pilot who has so far spent 196 days in space.

He flew to the ISS on Expedition 50/51, becoming the 10th French astronaut to head into space.

During his mission, he took part in more than 50 experiments and two spacewalks to maintain the space station.