SpaceX successfully launches another 60 Starlink internet satellites into orbit around the Earth after two days of weather delays, bringing total number to 180

SpaceX has successfully launched its next batch of 60 Starlink satellites from the ‘Slick 40’ launch pad in Cape Canaveral.

The cluster of satellites was twice delayed earlier this week due to adverse weather.

Elon Musk, CEO of SpaceX, hopes to eventually send thousands of satellites into space to beam internet down to all of Earth’s inhabitants.

This launch will take the current total of Starlink satellites in orbit to 180.

Astronomers have condemned the project since the first launch in May 2019 over fears it will blot out the night sky and make scientific research more difficult. 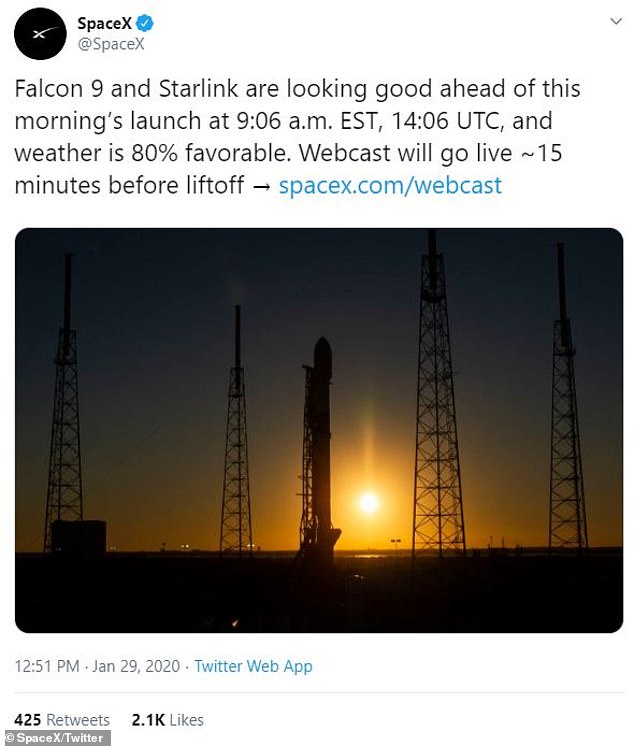 Many stargazers and scientists have reported seeing a train of the satellites over the past few months in what would have been a clear night sky.

University of Alabama astronomer Bill Keel told the AFP that the sighting of the first Starlink satellite train had experts trying to extrapolate what effect artificial constellations of such steady brightness might have as they grow in number.

Fears developed, he said, that ‘in 20 years or less, for a good part the night anywhere in the world, the human eye would see more satellites than stars.’

However, SpaceX believes this project will do more good than harm, as ‘Starlink will provide fast, reliable internet to locations where access has been unreliable, expensive, or completely unavailable,’ the company writes in its mission description.

As part of the last launch a satellite covered in a dark, anti-reflexive coating was sent to orbit.

SpaceX’s live stream presenter said the data from this experiment had not yet been received and no satellites on today’s mission featured the unique coating.

The satellites are designed to provide broadband coverage across the world’s surface.

Today’s launch will be the third operational batch of satellites into orbit around the Earth, bringing Starlink’s budding infrastructure to a total of 180.

Each spacecraft weighs just 575lbs (260kg) and will form part of the larger Starlink constellation.

When fully loaded with kerosene rocket fuel, it holds more than one million pounds of fuel which will be depleted in around three minutes, SpaceX engineer Jessica Anderson said on the live broadcast.

Satellites will eventually orbit 341 miles above Earth and the main rocket will land on the ‘Of Course I Still Love You’ droneship in the Atlantic Ocean.

Today’s successful take-off at 14:06 GMT (9:06ET) , despite the previous weather issues, went off without a hitch and takes the total Starlink constellation number to 120

SpaceX announced on Twitter that it was forced to ‘stand down’ following strong upper level winds on Monday. it also confirmed it will be launching tomorrow at 9:28 am EST (14:28 GMT) 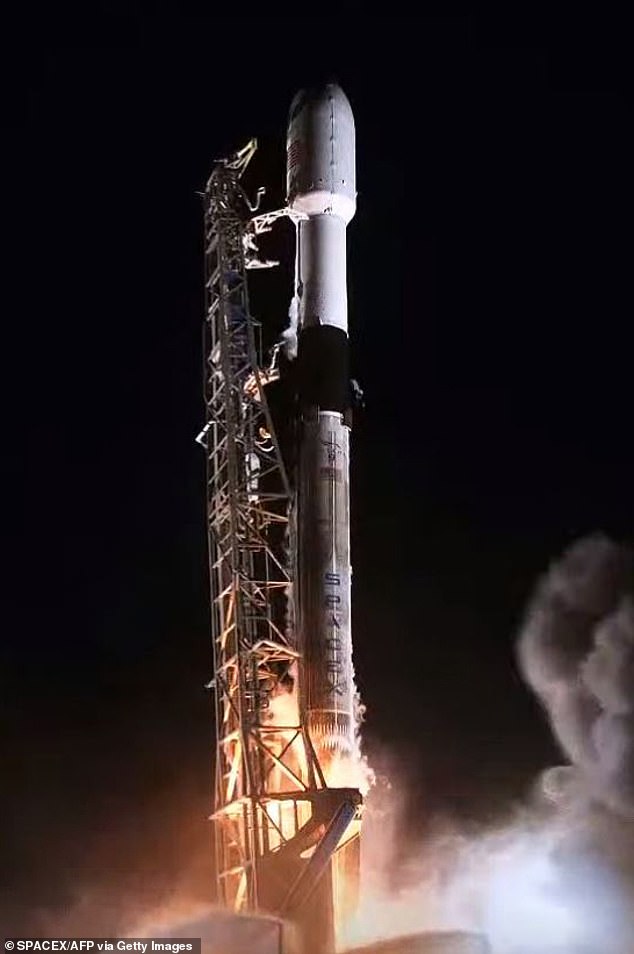 SpaceX has been forced to delay today’s launch of another 60 Starlink satellites into orbit. The cluster of satellites was set to be launched at 9:49 ET (14:49 GMT) from Cape Canaveral 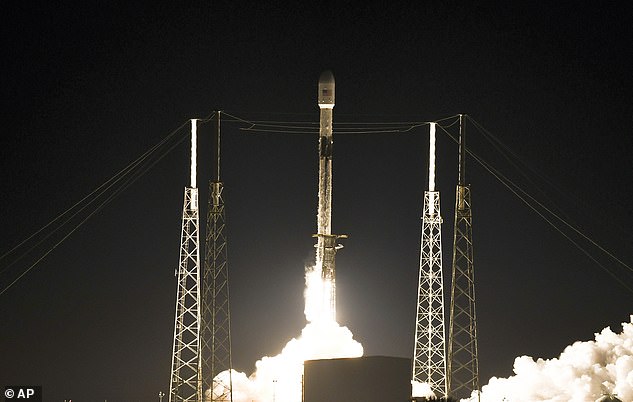 ‘Strong upper level winds’ were cited as the reason for the cancellation and it is now scheduled for launch tomorrow at 9:28 am EST (14:28 GMT)

Dozens of satellites have already been launched and Musk has received clearance from the relevant authorities to send thousands more into orbit.

The previous launch on January 6 featured one satellite covered in a dark coating designed to appease to appease disgruntled astronomers.

It is hoped the anti-reflective test material will be the first step in a compromise to allow Starlink to thrive while not interfering with views of space from Earth.

Last month, astronomers called plans for the high-speed global internet a ‘tragedy’ and said they are getting in the way of key scientific observations.

‘The night sky is a commons — and what we have here is a tragedy of the commons,’ Imperial College London astrophysicist Dave Clements told the BBC.

The proposed constellations, he added, ‘present a foreground between what we’re observing from the Earth and the rest of the Universe.

‘So they get in the way of everything. And you’ll miss whatever is behind them, whether that’s a nearby potentially hazardous asteroid or the most distant quasar in the Universe.’

The satellites will be a particular menace to large-scale surveys of the sky, like Chile’s planned Large Synoptic Survey Telescope (LSST).

‘What we want to do with LSST and other telescopes is to make a real-time motion picture of how the sky is changing,’ explained Dr Clements.

‘Now we have these satellites that interrupt observations, and it’s like someone’s walking around firing a flashbulb every now and again.’

SpaceX is looking into the potential to make the satellites less reflective, in a bid to reduce their interference with astronomers on Earth.

One specific craft in tonight’s launch is fitted with a less-reflective surface to reduce glare and is being used as a test case to see how it affects its performance. 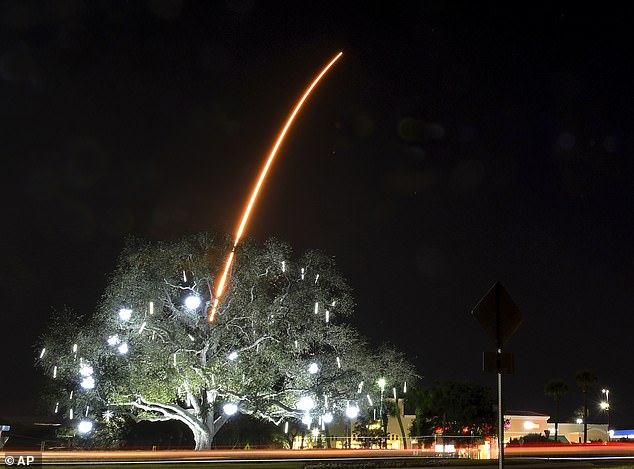 The minor setback will not deter SpaceX as it presses on with its controversial mission to beam down internet for all via an interconnected satellite constellation. Skygazers have repeatedly bemoaned the shiny spacecraft 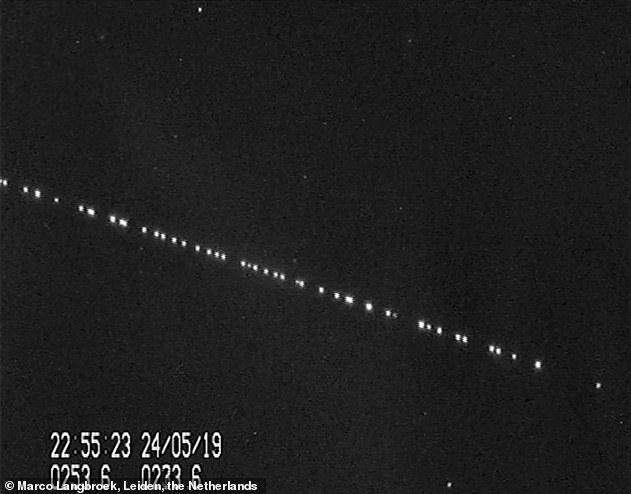 ‘SpaceX has not yet eased the minds of astronomers concerned about the reflectivity of their Starlink satellites,’ she told AFP.

‘The real test will be the days following launch when the smallsats are close together and in a lower altitude before ascending to their final orbit.

‘Astronomers and stargazers will be able to compare the brightness of this current batch of smallsats compared to previous versions.’

Another criticism of more crowded skies is it will result in expensive collisions between satellites, potentially creating thousands of pieces of new space junk.

SpaceX says it has a plan for that, too: its Starlink satellites deploy at an altitude of 290 kilometers (180 miles) and then engage their ion thrusters to reach an orbit of 550 kilometers (340 miles).

At the end of their life-cycles, the satellites will use their propulsion systems to de-orbit over the course of a few months – or if these fail, they will burn up naturally in the atmosphere in under five years, compared to the thousands of years required at higher altitudes

WHAT IS STARLINK AND WHAT ARE ITS GOALS?

Elon Musk’s SpaceX has launched the third batch of its ‘Starlink’ space internet satellites – taking the total to 180.

They form a constellation of thousands of satellites, designed to provide low-cost broadband internet service from low Earth orbit.

The constellation, informally known as Starlink, and under development at SpaceX’s facilities in Redmond, Washington.

The company recently filed plans with the Federal Communications Commission (FCC) to launch 4,425 satellites into orbit above the Earth – three times as many that are currently in operation.