Cosmic mystery is SOLVED after 900 years: Supernova first spotted over China in 1181 is identified as Pa30 – a nebula surrounding one of the hottest stars in the Milky Way

A 900-year-old cosmic mystery surrounding the origins of a supernova first spotted over China in 1181 has finally been solved.

A faint, fast expanding nebula called Pa30 has been identified as the source of the 12th century explosion, which Chinese and Japanese astronomers said was as bright as the planet Saturn and remained visible for six months.

Experts said Pa30, which surrounds Parker’s Star — one of the hottest stars in the Milky Way — fits the profile, location and age of the historic supernova.

Astronomers have solved a 900-year-old mystery surrounding the origins of a supernova first spotted over China in 1181. A faint nebula called Pa30 (pictured in three different images with colours showing X-ray emissions) has been identified as the 12th century explosion’s source

HOW IS A NEBULA FORMED?

Planetary nebulae are formed when a star larger than our sun starts to die and gives off a solar-wind of gas.

As it grows older the wind becomes more violent and clashes with fragments of old star, forming strange shapes.

Later, the outer layers of the star are blown off and expose the star’s hot core, which lights up the surrounding gas and causes the eery glow.

Only once the glowing begins is the nebula visible to earth.

Factors such as how the star spins, what angle it is viewed at and the chemical composition of the gas affect the shape of the nebula.

There have only been five bright supernovae in the Milky Way in the last millennium, including the famous Crab nebula, but the origins of all bar the ‘Chinese Guest Star’ have been well known.

Despite 12th century astronomers recording an approximate location in the sky of the 1181 sighting, no confirmed remnant of the explosion had ever been identified until now.

The discovery was made by a team of international astronomers from Hong Kong, the UK, Spain, Hungary and France.

In a new research paper, they found that the Pa30 nebula is expanding at an extreme velocity of more than 1,100 km per second (at this speed, travelling from the Earth to the Moon would take just five minutes).

They used this velocity to derive an age at around 1,000 years, which would coincide with the events of 1181.

Professor Albert Zijlstra, from the University of Manchester, was one of the astronomers involved in the research.

He said: ‘The historical reports place the guest star between two Chinese constellations, Chuanshe and Huagai.

‘Parker’s Star fits the position well. That means both the age and location fit with the events of 1181.’

It has previously been suggested that Pa30 and Parker’s Star formed as a result of the merger of two white dwarfs.

A white dwarf is what stars like the sun become at the end of their lives when they have used up all their nuclear fuel.

Such merger events of white dwarfs are thought to lead to a rare and relatively faint type of supernova, called a ‘Type Iax supernova’.

Professor Zijlstra said: ‘Only around 10 per cent of supernovae are of this type and they are not well understood. 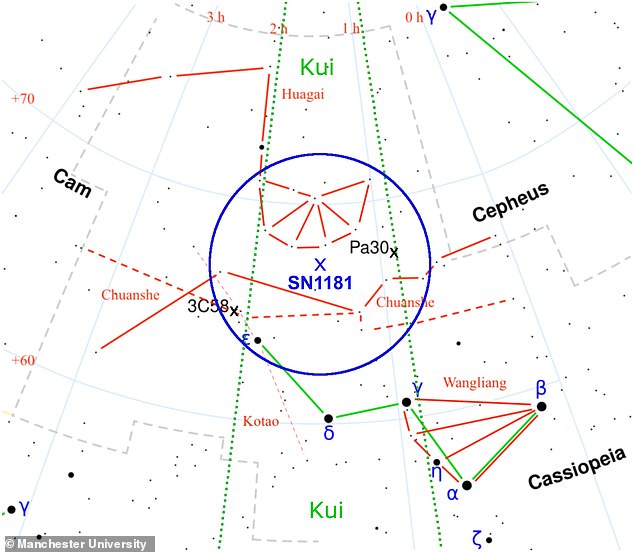 Professor Albert Zijlstra, from the University of Manchester, said all the research indicated that Parker’s star and Pa30 are the counterparts of the 1181 supernova (pictured on a star chart) 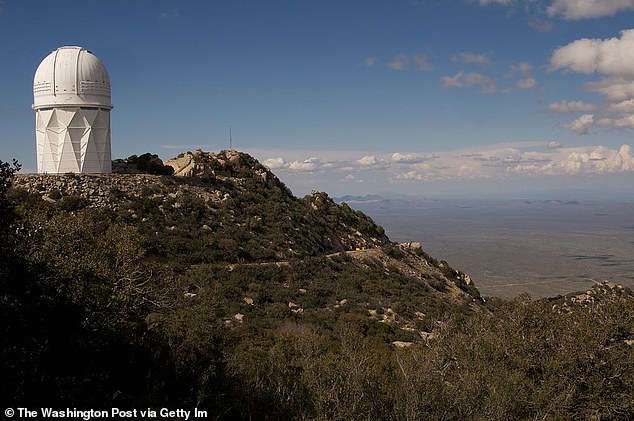 ‘The fact that SN1181 was faint but faded very slowly fits this type.

‘It is the only such event where we can study both the remnant nebula and the merged star, and also have a description of the explosion itself.’

The merging of remnant stars, white dwarfs and neutron stars, give rise to extreme nuclear reactions and form heavy, highly neutron-rich elements such as gold and platinum.

Professor Zijlstra added: ‘Combining all this information such as the age, location, event brightness and historically recorded 185-day duration, indicates that Parker’s star and Pa30 are the counterparts of SN 1181.

‘This is the only Type Iax supernova where detailed studies of the remnant star and nebula are possible.

‘It is nice to be able to solve both a historical and an astronomical mystery.’

The research has been published in the The Astrophysical Journal Letters.

A supernova occurs when a star explodes, shooting debris and particles into space.

A supernova burns for only a short period of time, but it can tell scientists a lot about how the universe began.

One kind of supernova has shown scientists that we live in an expanding universe, one that is growing at an ever increasing rate.

Scientists have also determined that supernovas play a key role in distributing elements throughout the universe.

In 1987, astronomers spotted a ‘titanic supernova’ in a nearby galaxy blazing with the power of over 100 million suns (pictured)

There are two known types of supernova.

The first type occurs in binary star systems when one of the two stars, a carbon-oxygen white dwarf, steals matter from its companion star.

Eventually, the white dwarf accumulates too much matter, causing the star to explode, resulting in a supernova.

The second type of supernova occurs at the end of a single star’s lifetime.

As the star runs out of nuclear fuel, some of its mass flows into its core.

Eventually, the core is so heavy it can’t stand its own gravitational force and the core collapses, resulting in another giant explosion.

Many elements found on Earth are made in the core of stars and these elements travel on to form new stars, planets and everything else in the universe.