When veggie burger startup Impossible Foods tried to pitch its”bleeding” patties to Burger King last year, the restaurant chain told the company it had a problem. Its system of cooking burgers — which involves broiling them over an open flame — didn’t work with the Impossible Burger. Instead of browning like a traditional meat burger, the Impossible patties crumbled and fell apart.

So Pat Brown,Impossible Foods’ founder and CEO, charged the staff at his Silicon Valley startup with creating the Impossible Burger 2.0: a second version of the patty that more closely mirrored traditional beef. While they were at it, he challenged them to make the patties juicier, healthier, cheaper to make, and even more environmentally-friendly.

That was a year and a half ago. Today, the team has surpassed every part of Brown’s request, he told Business Insider in a recent interview.

The new Impossible Burger is gluten-free, lower in fat, saturated fat, and sodium, and cheaper to make than the original. Those changes are what allowed the company to launch the firstImpossible Whopper in Burger King chains in St. Louis, Missouri at the end of last month. Burger King plans to roll out the veggie option in 7,200 restaurants nationwide by the end of 2019.

“We’ve left the cow in the dust,” Brown said.

The market for a better vegetarian burger is beginning to sizzle. Rival Beyond Meat held an explosive initial public offering earlier this month. As a result, Beyond Meat’s share nearly tripled, and it’s now valued at about $3.9 billion. Impossible Burger was valued at $2 billion in a funding round this week,according to Reuters.

The St. Louis launch exposed a big challenge for the startup. Demand quickly exceeded supply, threatening to turn disappointed customers back on to traditional beef.

So starting in about a week, the first Impossible patties made with a final new ingredient — genetically-modified soy — will roll out. Brown anticipates the news could strike some customers as controversial. But he hopes it will help them meet another surge in demand when the burgers roll out at Burger Kings nationally in roughly 6 months.

“There are people who don’t like it, and they tend to be disproportionately vocal about it,” Brown said.

Here’s the inside story of how a Silicon Valley startup went from tempting Bay Area techies with the first high-end “bleeding” veggie patty to replacing meat burgers at fast-food chains like Burger King across the nation.

‘It lit a fire under our plans’ 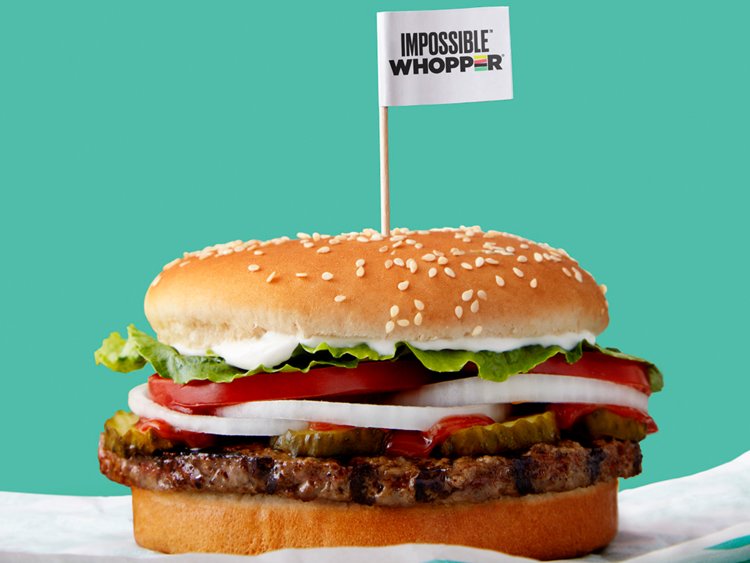 The city-wide launch was meant to be a test. Would burger lovers bite? Or would the meat-like patty fail to win over meat lovers in the second-largest meat-producing state in the country?

The veggie patties were a hit. The leadership at Burger King cheered, with some boasting that even they couldn’t tell the difference between the Impossible Whopper and the real thing.

The Impossible team panicked. Demand was quickly outpacing what their Oakland factory could supply.

Within days, other restaurants that had been selling the Impossible Burger had to turn customers away because they wereout of the burgers.

Some burger joints tried appeasing people with an alternative: they offered the rivalBeyond Burger, a veggie patty that’s also meant to taste like the real thing. But according to at least onereport, customers who flocked to a restaurant that once offered the Impossible Burger left when they were informed the Beyond Burger was on the menu instead.

In other words, people didn’t want Beyond — they wanted Impossible.

No one felt the squeeze more than staff at Impossible Burger’s manufacturing plant in Oakland. According to Brown, the facility was originally designed to churn out a couple million pounds of Impossible “beef” each year.

Last year, demand started to rise. By the end of 2018, Impossible staff needed to turn out a million pounds of Impossible meat every month. Since launching across the globe in Hong Kong last year and then in Singapore this February, sales in Asia have risen more than three-fold, the company said. But in the US, the Burger King launch sent them scrambling.

“It lit a fire under our plans,” Brown told Business Insider.

To meet Burger King’s appetite, Brown started calling for volunteers. He asked staff to help pack and assemble patties in below-freezing temperatures as part of a series of temporary 12-hour shifts that kept the plant running around the clock. Some started at 3 a.m. One of the first people to heed the call was Brown’s 32-year-old daughter, who works in Impossible’s research and development department.

“We’re all in on this,” Brown said. “When we needed people to stack burger patties in the freezing cold, she signed up.”

Despite all their best efforts, though, Impossible wasn’t able to make enough patties to satisfy growing consumer appetites.

Impossible plans to use the funds to ramp up its manufacturing capabilities, Brown said. That will include hiring up to 50 new employees and adding a second production line this summer.

The company is also tweaking its recipe. The soy in the patties, which was added to replace wheat at the beginning of the year, will be sourced from American farmers who use genetic modification, Brown told Business Insider. That means the soy in the burgers will technically be a GMO.

Impossible’s shift from wheat to soy: more protein, no gluten, and one small problem 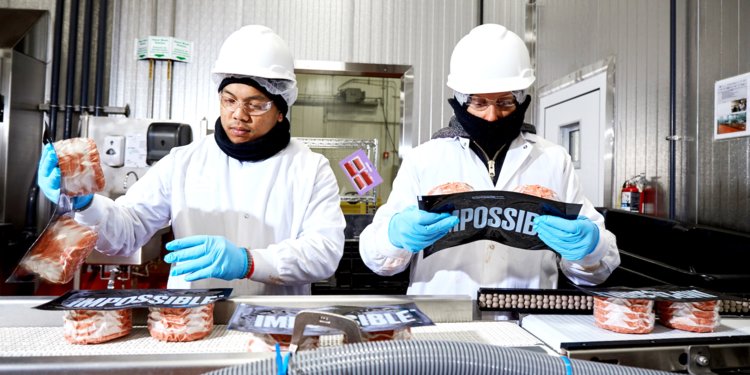 Impossible Foods recently swapped the wheat in its patties for soy. The new burgers will include soy made with genetic modification.Courtesy Impossible FoodsIf there’s a single thorny ingredient in Impossible’s new, higher-protein, lower-fat, and more broiler-friendly burger, it is its soy.

This wasn’t always the case. Impossible used to use wheat in its recipe, but consumer demand for gluten-free products — coupled with Burger King’s request for a burger that could be grilled over an open flame — led the company to swap it out for soy. As a result, the Impossible Burger 2.0 is significantly healthier than its predecessor.Customers say it tastes better too.

Still, Impossible Foods is no stranger to controversy. Last year, the company faced ire from activists and journalists who questioned the safety of a substance calledheme in its patties. (Heme is the ingredient that allows the Impossible patties to “bleed” and imbues them with their beef-like flavor.)

That heme was made using genetic modification and, according to some activists, had not yet been proven safe to eat. Last summer, regulators at the Food and Drug Administrationdeemed heme safe, cooling off the controversy.

Starting last month on the heels of the Burger King launch, a new problem arose. This time, it had to do with the soy in their burgers.

For several months, Impossible had been contracting with a supplier to get GMO-free soy, or soy produced without genetic modification. Brown — who was once a Stanford biochemistry professor — said this was part of the company’s aim to avoid unnecessary public controversy: while there’s broadscientific consensus that GMOs aresafe, some activists are vocal about the ingredients’ potential for harm.

Still, Impossible ran its own analysis and compared the ramifcations of using GMO soy versus non-GMO soy on human health and the environment. As far as health, both ingredients were roughly the same, the company concluded. When it came to the environment, however, the GMO soy had a slight leg up, Brown said.

Some research suggests that GMO crops are linked with moderatereductions in soil erosion, meaning they could be less damaging for the planet overall. In addition, if Impossible chose to use only non-GMO soy, it’d have to import it roughly 6,500 miles from a supplier in Brazil, pushing loads of extra carbon into the air in the process.

There was a second component of the analysis that struck Brown in particular, however.

If his company failed to make enough of its product to go national, it could lose thousands of customers who, rather than opting for a vegetarian Impossible Whopper, might just get a regular beef burger instead.

“The worst thing we could do is limit the production of our product and not compete against the cow,” Brown said.