Birthing a new space telescope takes a long time and a lot of money and inspiration. Astronomers first began pestering NASA for the successor to the Hubble Space Telescope even before that telescope was launched into orbit in 1990. Back then they thought it could cost less than a billion and be ready in the first decade of the 21st century.

Thirty years, $8.8 billion, multiple mishaps and budget crises and a threatened congressional cancellation later, the James Webb Space Telescope is finally ready. NASA now plans to launch it into orbit as early as Oct. 31 aboard an Ariane 5 rocket supplied by the European Space Agency, from a site in French Guiana.

During a recent meeting of the American Astronomical Society, technicians and engineers showed off the telescope for what they hoped would be the last time to humans on the ground.

“The next time the observatory looks like this,” said NASA’s Eric Smith, project manager for the telescope, “it will be beyond the moon and appear to us as a roughly 17th-magnitude point source.”

Completely assembled in its clean room at Northrop Grumman in Los Angeles, the telescope, as viewed over a virtual “town hall” meeting during the conference, resembled a giant sunflower riding on a surfboard. The flower’s petals are 18 gold-plated beryllium hexagons joined to form a dish more than 20 feet across. The surfboard, on which it will float eternally on the far side of the moon, is a sandwich of five layers of a plastic called Kapton that will shield the telescope from the heat and glare of the sun.

The telescope, named for the NASA administrator who led the agency through the development of the Apollo program, is almost three times larger than the vaunted Hubble and seven times more powerful in its ability to discern faint stars and galaxies at the edges of time. 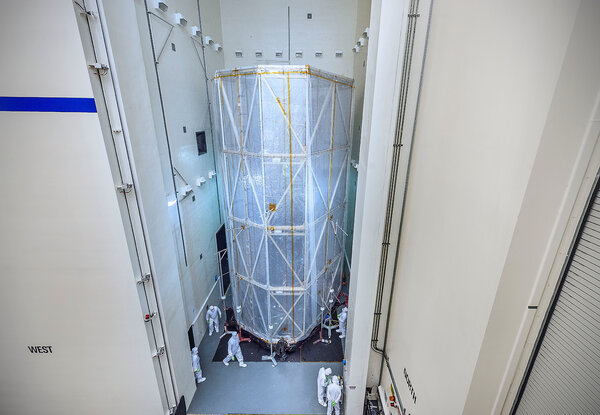 To get them into space aboard the Ariane 5 rocket supplied by the European Space Agency, the shield and the telescope mirror will have be folded up, then must unfold a million miles out in space in a series of some 180 maneuvers in the first month after launch. The steps of that deployment have been practiced over and over in the last few years.

An early rehearsal ripped the sun shield, causing yet another delay to the project.

The engineers think they have it right now, but they refer to the impending outer-space unfolding and testing period as six months of terror. And there are still a couple of half-inch tears in the Kapton that need to be patched, Dr. Smith said.

The Webb telescope’s mission is to explore a realm of cosmic history that was inaccessible to Hubble. About 150 million to a billion years after time began, the first stars and galaxies were born and began burning their way out of a gloomy fog of hydrogen gas that prevailed at the end of the Big Bang. Exactly how that happened is unknown.

The mission requires the Webb to be tuned to a different kind of light than our eyes or the Hubble can see. Because the expansion of the cosmos is rushing those earliest stars and galaxies away from us so fast, their light is red-shifted to longer wavelengths, much as the siren from an ambulance shifts to a lower register as it speeds by.

Thus, blue light from an infant galaxy way back then, bursting with bright new stars, has been stretched to invisible infrared wavelengths — heat radiation — by the time it reaches us 13 billion years later.

As a result, the Webb telescope will produce cosmic postcards in colors that no eye can see. But to detect those faint emanations of heat, the telescope must be very cold — less than 45 degrees Fahrenheit above absolute zero — so that its own heat does not wash out the heat from outer space. Hence the need for the sun shield, which will keep the telescope in permanent, frigid shade.

As it turns out, infrared emissions are also ideal for studying exoplanets, worlds that belong to other stars. That approach was encouraged in 1996 in a pivotal report, “HST and Beyond, Exploration and the Search for Origins: A Vision for Ultraviolet-Optical-Infrared Space Astronomy,” from a committee led by Alan Dressler of the Carnegie Observatories.

Their vision was prescient. At the time, exactly three exoplanets were known. In the decades since, while the Webb telescope was wending its way through a painful development, exoplanet research has bloomed. NASA’s Kepler mission found thousands of exoplanets, implying that there are hundreds of millions in the galaxy for astronomers and the Webb to observe.

Indeed, one of the most anticipated early results from the Webb will be of the planets in the Trappist-1 system, just 40 light-years from here. It contains seven planets, three of which are rocks the size of Earth in the so-called habitable zone, where water could exist. Among other things, the Webb telescope will be able to sniff the atmospheres of these planets by seeing how they interact with light from their respective stars — a first step toward investigating whether potentially habitable planets are truly habitable or even perhaps inhabited.

That search for life is front and center in a new documentary film about the Webb telescope, “The Hunt for Planet B,” which was made by Nathaniel Kahn and will premiere at the South by Southwest Festival in March. The film, somewhat to Mr. Kahn’s surprise, also documents a sociological revolution in astronomy — namely, that many of the leaders in the field of exoplanets are women.

Feature billing goes to researchers like Jill Tarter of the SETI Institute, a pioneer in the search for extraterrestrial civilizations; Natalie Batalha of the University of California, Santa Cruz, a leader of the Kepler mission who is now planning Webb observations; Margaret (Maggie) Turnbull, an expert on habitable planets at the University of Wisconsin, and a former candidate for governor of that state, whom Mr. Kahn interviewed as she tended her backyard beehives; and Amy Lo, a Northrop engineer who works on racecars when she is not working on making all the Webb pieces fit together.

“It doesn’t matter what I think,” Dr. Tarter says when asked by Mr. Kahn about life in the universe. The pundits and priests have been removed from the equation: “We’re not doing religion here, we’re doing science.”

Mr. Kahn was nominated for Oscars for his film “My Architect,” about his father, the architect Louis Kahn, and “Two Hands: The Leon Fleisher Story,” about a pianist who lost the use of one hand to a neurological condition. He is a longtime amateur astronomer. He had set out to make a film about the building of the telescope, but one of the joys of filmmaking, he said in an interview, is that “you start out making it about one thing, Webb, and it evolves naturally into a much deeper story. And that’s really the emergence of women at the forefront of astronomy.”

Sara Seager, a planetary expert at the Massachusetts Institute of Technology, whose story helps frame the film’s narrative, said the emergence made perfect sense. “When exoplanets was a brand-new field, the field by definition couldn’t be dominated by old white men,” she told The New York Times in an interview. “In fact, older scientists were reluctant to jump into a brand-new and seemingly risky field, so there were few to no people to inflict their biases on the community.”

Dr. Seager recalled being shocked when she started attending cosmology conferences that almost all the speakers were men with white or gray hair. “Simply, in cosmology there were no niches for new types of people to join,” she said. “In the exoplanets subconference, no one was over age 40 and most were under age 30.”

Dr. Batalha said that the exoplanet field was originally led by men like Michel Mayor and Didier Queloz of the Geneva Observatory, who shared the Nobel Prize in 2019 for discovering the first exoplanet, and William Borucki of NASA’s Ames Research Center, who conceived and led the Kepler mission, but women had flourished and advanced.

Forward to the past

So far 4,332 astronomers from 44 countries and 45 states, plus the District of Columbia and the Virgin Islands, have submitted proposals for the first round of Webb observations, according to numbers supplied by Christine Chen of the Space Telescope Science Institute during the Webb show-and-tell. About 31.5 percent of the researchers are female, which roughly tracks with recent statistics that one-third of astronomy Ph.D.s go to women.

“We naturally have diversity built into it,” Dr. Smith, the project manager, said of the Webb program during the recent show and tell.

He added: “As scientists, we also know that the universe reveals itself rarely through data that conform to our models or theories, that rather it is those data that lie outside our expectations that point us closer to a universal truth. And so, just as we know we must seek to understand our data that are different from our preconceived notions, to understand the cosmos better, we need to seek different viewpoints when we conceive and build missions.”

The launch of Webb in the fall will be among the grand events of space science this year, along with the next robot invasion of Mars, set to occur this winter when the latest fleet of robots lands there.

It’s not crazy to think that if this pace continues, we might well learn in the next half-century that life exists in some form in the nearby cosmos, whether hiding under the ice of a giant planetary moon, under a rock on Mars or sweltering in some alien extraterrestrial swamp. Any hint would be a giant step toward understanding the whys and wherefores of our own origins.

As Dr. Dressler and his co-authors wrote in their 1996 report, “A remarkable triumph of 20th-century astronomy is the demonstration that this notion is true: that our origin, and perhaps our destiny, lies among the stars” Alluding to the popularity of science fiction in movies, television and books, they wrote that “increasingly, great themes of human existence are being projected into space.”

“Our physical journeys into the cosmos are maybe generations in the future,” they concluded, “but our minds already live in the Space Age.”