Home » Science » These Researchers Tested Positive. But the Virus Wasn’t the Cause.

In mid-June, Timothy Wannier tested positive for the coronavirus. Within 48 hours of receiving his jarring result, he felt almost certain there had been a mistake.

“The evidence was overwhelmingly obvious,” said Dr. Wannier, a geneticist at Harvard University. At the time, case numbers were down in Massachusetts, where he, his wife and two young children had been vigilantly sheltering in place for months. Dr. Wannier had no symptoms, and neither did any of his close contacts. To his knowledge, he had not been around the coronavirus at all.

He had, however, spent the last couple days in a room teeming with pieces of the pathogen’s genetic material.

Dr. Wannier is a postdoctoral fellow in the lab of the Harvard geneticist George Church, one of many scientists conducting research on the coronavirus’s genes — harmless hunks of molecules that pose no infectious threat. Unfortunately for three members of the Church lab, those genes also happened to be the target of a widely used coronavirus test, made by the Broad Institute in Cambridge, Mass., that Dr. Wannier and two colleagues took the week of June 15 as part of their university’s routine screening regimen. Unaware of the virus genes in or on their bodies, the three had inadvertently tricked the test into identifying them as infected.

“I guess it is probably somewhat embarrassing,” Dr. Wannier said. (Out of an abundance of caution, he, his colleagues and their close contacts still isolated and quarantined.) But given the nature of his lab’s ongoing projects, he added, “something like this was bound to happen at some point.”

Contaminated positives such as these are extremely rare, health experts said. People outside the research community should not worry about their own test results being compromised by lab chemicals. Blame also should not be pinned on the test, which did its intended job of rooting out the virus’s genetic material.

“This isn’t the fault of any test,” said Dr. Rosemary She, a pathologist and diagnostics expert at the University of Southern California who was not involved in the contamination events. “This is human error.”

But in a nation with a patchwork approach to testing, and where a great many researchers have rapidly pivoted to studying the coronavirus, contaminations are occurring with unexpected frequency. In recent weeks, similar issues have struck labs at the Massachusetts Institute of Technology, Brown University, Roger Williams University, Cornell University and elsewhere, delivering puzzling results to anxious scientists, prompting building closures and fueling frustration in tests, which could damage efforts to keep the coronavirus in check.

Paradoxically, many of the researchers who contaminated themselves with coronavirus genes — including some of Dr. Wannier’s co-workers — did so while trying to develop new diagnostics to detect the virus.

Experts noted that these incidents had exposed troubling weaknesses in testing and isolation strategies, and should serve as a powerful reminder of both the promise and perils of coronavirus diagnostics, which continue to be rolled out at breakneck speed.

The contamination events played out similarly at several institutions. The Church lab, where five people have tested positive, was among the earliest. Nine scientists in three separate research groups at the neighboring Wyss Institute were soon to follow, as well as two members of a lab at M.I.T. run by the Crispr scientist Feng Zhang. Some 50 miles south, 10 people at Brown University suffered a similar experience shortly after the campus reopened for fall term. Six more such cases have been identified at Cornell.

All of these cases, experts said, have been designated as suspected contaminations, not true infections, although that is not easy to prove. It remains possible that some people actually contracted the virus. But based on who was tested and when, “we don’t think these were true cases of Covid,” said Russell Carey, Brown’s executive vice president for planning and policy.

The genome of the coronavirus is written in RNA, a close cousin of the DNA found in human cells, and is relatively fragile in its natural state. Converted to DNA, however, the virus’s genes can linger for long periods on surfaces, objects and passers-by, perhaps after being splashed or sprayed out of lab equipment.

After the spate of positive test results this summer, researchers at the Wyss Institute and the Church lab, led by the virologist Lindsey Robinson-McCarthy, started to survey their surroundings for genetic residue. Wayward bits of DNA, they found, had made their way onto equipment, sinks, door handles, backpacks and clothing. A few fragments even hitchhiked home with one researcher, contaminating a doormat that then deposited the molecules onto the shoe of an unwitting family member.

“It was everywhere,” said Gabriel Filsinger, a member of the Church lab who has been working with coronavirus genetic material and tested positive in June. “It went further than we would ever imagine. My backpack has been continuously positive this entire time.”

Not everyone who came into contact with the DNA ended up with a positive result. But many of the tests that were taken required people to swab their own noses; genetic material could have drifted in atop an unwashed hand, or via a nostril teeming with fragments of inhaled DNA.

“The thing about contamination is, it’s really insidious,” said Susan Butler-Wu, a clinical microbiologist at the University of Southern California who was not involved in the contamination events. Without regular checks by trained professionals, loose DNA can go unnoticed for months, even years, and can be nearly impossible to eliminate.

(Dr. Church said he was not terribly surprised by the circumstances surrounding the contamination. He has hardly left his home since March, he said, and did not test positive.) 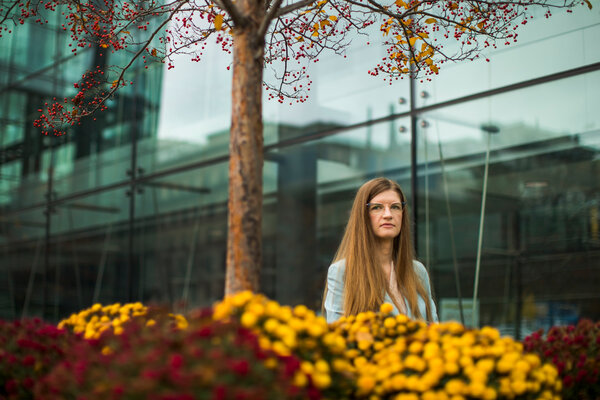 Several affected institutions have since started doubling down on cleaning procedures that use chemicals capable of destroying stray DNA. The Church lab also switched to working with different coronavirus gene fragments, to avoid overlap with the Broad’s test. But even after meticulous scrubbing, suspicious positives have continued to occur, said Jenny Tam, a geneticist at the Wyss Institute.

The repercussions of contamination can be tough to erase. The week of Oct. 11, 20 faculty members and students affiliated with the Marine and Natural Sciences Building at Roger Williams tested positive for the coronavirus — seemingly the campus’s largest cluster of cases to date. The building was shut down and deep-cleaned; several classes were canceled or moved online. All 20 people were shuttled into mandatory isolation, and the Rhode Island Department of Health was called to investigate.

Officials discovered that two faculty members in the building had been working with synthetic coronavirus genes in the form of DNA. Although no active viruses were involved in the research, their project had likely flung bits of DNA all about.

Words to Know About Testing

Confused by the terms about coronavirus testing? Let us help: