The Fork-tailed Flycatcher, a tiny bird that lives in the American tropics, uses the rustling of its wings to communicate and has different dialects, a study has found.

The species is divided into two sub-species, one which spends the whole year in the northern part of South America and the other which breeds in the southern part of the continent but returns closer to the Equator in winter.

The study found the migratory sub-species makes a higher-pitched sound when flying, likely due to thinner feathers which evolved to help it fly long distances.

As a result of the two sounds, which scientists liken to human accents, the birds may only be able to mate with individuals that ‘speak the same language’.

This lack of communication and selective mating could soon result in the species splitting in two, scientists believe. 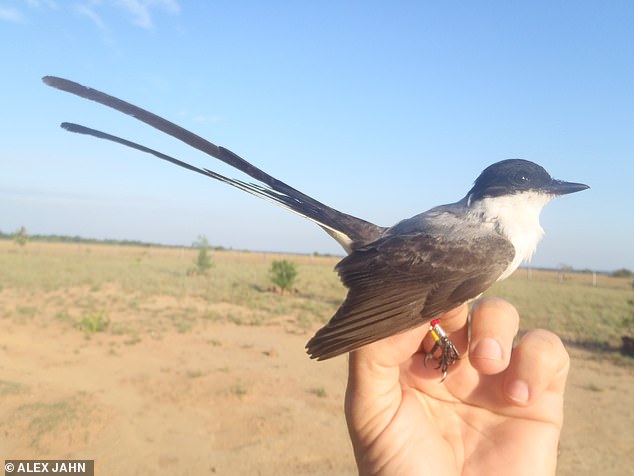 A tropical bird in the American tropics, the diminutive Fork-tailed Flycatchers (pictured), uses the rustling noise of its wings to communicate, a study has revealed. There are two sub -species, one migratory and one non-migratory, and they have distinct accents

‘We already knew from past genetic analysis that the two groups are becoming different species, so we wanted to know if there were any differences in the sounds that the males produce with their wings,’ says Valentina Gómez-Bahamón, a researcher at Chicago’s Field Museum.

‘We not only confirmed the way that these birds make sounds with their feathers, but that the sounds are different for the two subspecies.’

Weighing only an ounce, Fork-tailed Flycatchers are black-and-grey and look like tiny swallows – except for their foot-long, scissor-shaped tails.

Hummingbirds can cool their bodies to less than 4°C (40°F) at night – the lowest temperature recorded in any bird – to save energy for use the daytime, researchers have found.

This rare ability is called torpor, and is a brief hibernation-like state which slashes energy expenditure by 95 per cent in the diminutive birds.

Hummingbirds have wings that beat more than ten times a second and during daylight they use their hovering ability to suck nectar from thousands of flowers.

To keep up, their tiny hearts beat around 1,000 times a minute, but this drops to just 50 during torpor.

They use those giant tail feathers to help attract mates – and spread them while hunting or fighting.

But it’s the flight feathers in the male birds’ wings that make the sounds.

‘They are very feisty, they are not afraid of anything.’

The birds are territorial and fight off bigger birds that come near their nests – even hawks more than ten times their size.

During the mating season males fight, producing a high-pitched trilling sound. Ms Gomez-Bahamon and colleagues found it came from the fluttering of feathers.

After taking measurements, the researchers let them go and recorded audio and video of the birds as they flew away.

They also used the territorial nature of the birds to get a closer look by using a taxidermy hawk with a camera and microphone attached.

By analysing the audio and video, the researchers proved the unique sound did come from the flight feathers.

Ms Gomez-Bahamon says the birds make the noise in two scenarios, when fighting and win early morning, when it’s still dark, to display to females.

The findings are published in the journal Integrative and Comparative Biology.