A two-legged robot that can chase you down in the street may sound like something dreamed up for the latest episode of Black Mirror.

But it may not be far from reality, after a two-legged robot known as ‘Cassie’ set a new Guinness World Record for the fastest 100 metres by a bipedal robot.

Cassie clocked the historic time of 24.73 seconds, starting from a standing position and returning to that position after the sprint, with no falls.

While that’s more than 15 seconds slower than the world record for a 100-metre sprint by a human, held by Usain Bolt at 9.58 seconds, it is faster than most humans would take to jog the same distance.

Oregon State robotics professor Jonathan Hurst, who led the development of the robot, described it as ‘a big watershed moment’.

‘This may be the first bipedal robot to learn to run, but it won’t be the last,’ he said. 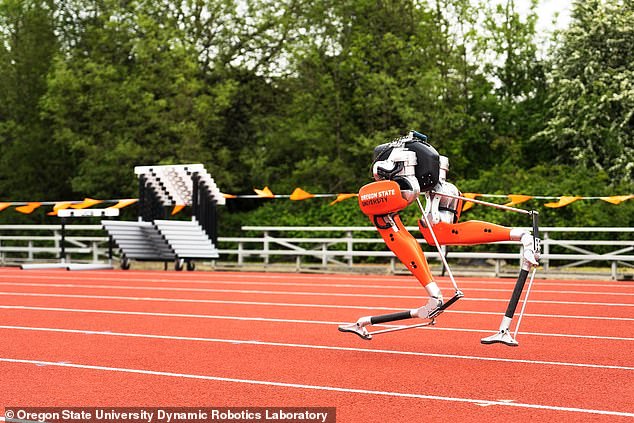 Cassie clocked the historic time of 24.73 seconds, starting from a standing position and returning to that position after the sprint, with no falls

The 100-metre record builds on earlier achievements by the robot, including running 5 kilometres in 2021 in just over 53 minutes.

Cassie completed the 5K on Oregon State’s campus untethered and on a single battery charge.

The robot has knees that bend like an ostrich’s and operates with no cameras or external sensors – essentially as if blind – using machine learning to control its running gait.

‘We have been building the understanding to achieve this world record over the past several years, running a 5K and also going up and down stairs,’ said graduate student Devin Crowley, who led the Guinness effort.

‘Machine learning approaches have long been used for pattern recognition, such as image recognition, but generating control behaviours for robots is new and different.’

While completing a 5K helped to prove Cassie’s reliability and endurance, it left open the question of how fast the robot could run.

This led the research team to shift its focus to speed. 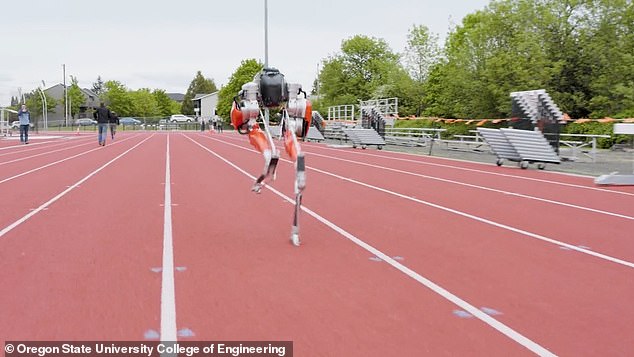 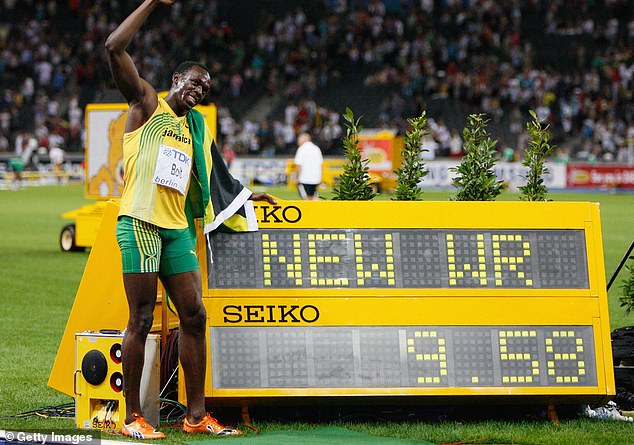 The human record holder for the event is Usain Bolt, who clocked an astonishing 9.58 seconds at the 2009 IAAF World Championships

Can a human EVER run 100 metres in under nine seconds?

The main issue in achieving a sub-nine second race is how much power humans can produce, and what the requirements are to achieve this.

To produce long steps at a high frequency, athletes must produce a huge amount of force in a very short period of time – approximately 4.5 times their body weight in around 0.1 seconds, according to Polly McGuigan and Aki Salo, lecturers in Sport Biomechanics at the University of Bath.

To do this, athletes must maintain a very stiff leg and accelerate it into the ground at foot contact.

‘Recent research has shown that it is this difference in the forces generated in the early part of the stance phase (just after foot contact) that distinguishes very fast sprinters from the less fast ones,’ the researchers said.

Cassie was trained for the equivalent of a full year in a simulation environment, compressed to a week through a computing technique known as ‘parallelisation’.

This involves multiple processes and calculations happening at the same time, allowing Cassie to go through a range of training experiences simultaneously.

‘Cassie can perform a spectrum of different gaits but as we specialised it for speed we began to wonder, which gaits are most efficient at each speed?’ Crowley said.

‘This led to Cassie’s first optimised running gait and resulted in behaviour that was strikingly similar to human biomechanics.’

‘Starting and stopping in a standing position are more difficult than the running part, similar to how taking off and landing are harder than actually flying a plane,’ said artificial intelligence professor Alan Fern, who was involved in developing the robots ‘brain’.

To address this, the researchers transitioned between two neural networks: one that can run, and another that can stand.

Getting it to work gracefully was then a matter of encoding proper timing for these transitions.

‘This 100-metre result was achieved by a deep collaboration between mechanical hardware design and advanced artificial intelligence for the control of that hardware.’

Cassie was developed with a 16-month, $1 million grant from the US Defense Advanced Research Projects Agency (DARPA) as well as funding from the National Science Foundation.

It’s 100-metre record, which was achieved on 11 May 2022, has been recorded as an official Guiness World Record.

‘Given the realistic nature of the task, establishing this record is a concrete milestone in robot locomotion and real-world capability,’ Guiness World Records states.

‘I believe control approaches like this are going to be a huge part of the future of robotics,’ added Hurst.

‘The exciting part of this race is the potential. Using learned policies for robot control is a very new field, and this 100-meter dash is showing better performance than other control methods.

‘I think progress is going to accelerate from here.’

Scurrying across the ground at speeds of up to 9mph, this four-legged robotic ‘cheetah’ is sure to make you jump.

It has been developed by engineers at MIT and is even able to rapidly traverse ice and gravel.

Billed as ‘virtually indestructible’, they said it had learned how to race across a range of different terrain through trial and error, in much the same way that humans learn.

Thanks to modern simulated technology, the researchers said, their mini cheetah robot was able to accumulate 100 days’ worth of experience on different grounds in just three hours of actual time.