Two thirds of branded food packaging is not recyclable at home, including Babybel, Dairy Milk and Capri-Sun

Popular brands including Pringles, Cadbury and Babybel use packaging that is either mostly unrecyclable or not recyclable at all, Which? found.

After analysing 89 of popular branded groceries, the consumer group found only 34 per cent had packaging that was fully recyclable in household collections.

And around 41 per cent items had no labelling to show if they could be recycled, leaving consumers ‘none the wiser’ about how to dispose of them.

The top brands are ‘failing to do their bit for the environment’ by using non-recyclable materials, the consumer watchdog said. 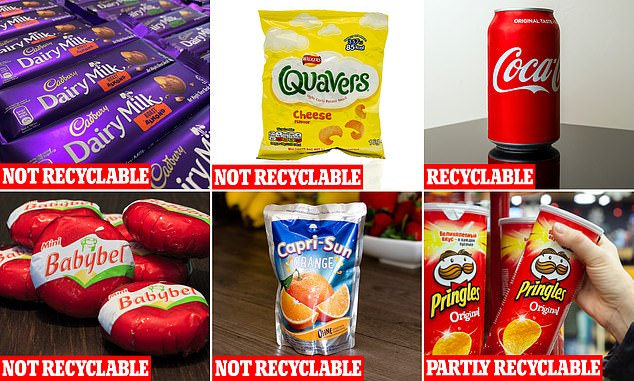 ‘Consumers are crying out for brands that take sustainability seriously and products that are easy to recycle,’ said Natalie Hitchins, Which? head of Home Products and Services.

‘But for any real difference to be made to the environment, manufacturers need to maximise their use of recyclable and recycled materials and ensure products are correctly labelled.

‘To reduce the waste that goes to landfill, the government must make labelling mandatory, simple and clear, enabling shoppers to know exactly how to dispose of the packaging on the products they consume.’ 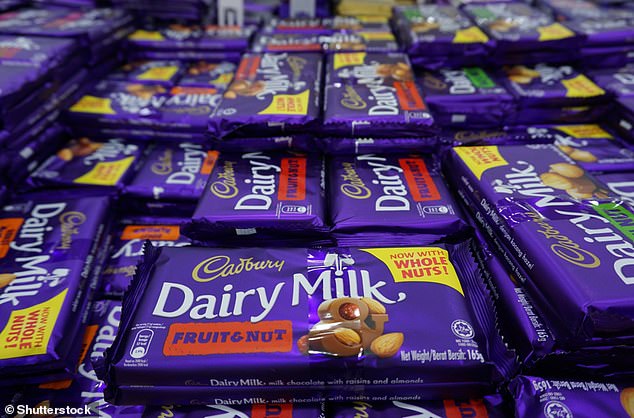 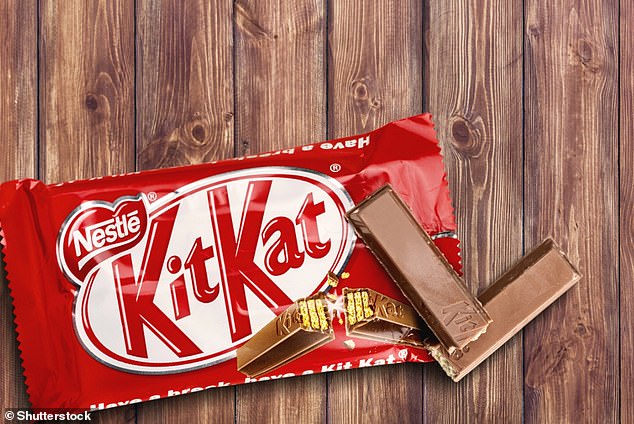 Nestlé has committed to making all its packaging recyclable or reusable by 2025, including the elimination of non-recyclable plastics

Each item’s packaging was broken down into its component parts, weighed and assessed on whether each piece could be easily recycled.

The recyclability of different types of groceries varied hugely, Which? found.

The worst category by some distance was crisps, with only three per cent of the potato-based snack packaging recyclable in household collections.

This included Pringles and their notoriously hard-to-recycle tube, which contains a mixture of metal, card and plastic.

While the Pringles tube as a whole cannot be put in the recycling bin, the plastic lid can. 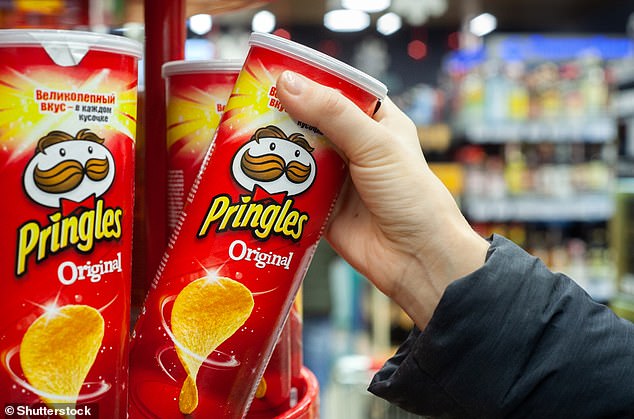 the current Pringles can is made up of a combination of foil, paper board, metal and plastic meaning it can be difficult to recycle through the existing household recycling system set-up

Pringles plastic lid made it the only product in the crisps category to have at least one component that was recyclable in household recycling.

Pringles is testing a new recycled paper tube at several UK Tesco stores, which if successful could be rolled out widely.

Which? pointed out that the Pringles tube design is far heavier than any other packaging in this category, however, so it would take more energy to transport.

Meanwhile, a Quavers multipack was a particularly bad offender in the crisps category.

None of the individual Quavers packets were found to be easily recyclable, although the outer bag was recyclable at supermarket collection points.

However it wasn’t labelled to say as such, meaning consumers are likely throwing it out with everyday rubbish.

Snack packs of Cathedral City and Babybel are packaged in plastic net bags, which are not only difficult to recycle but can also cause problems if they get caught up in recycling machines.

Babybel said it’s partnering with TerraCycle to allow UK and Ireland customers way to recycle all elements of its packaging including the cellophane, wax and net bags by the end of the year.

TerraCycle works with consumer product companies and manufacturers across 20 different countries to recycle the ‘non-recyclable’, breaking down packaging that would normally go to landfill.

‘Bel UK is absolutely committed to achieving 100 per cent recyclable or compostable packaging by 2025 and have a dedicated team of people, along with heavy investment in our infrastructure, to ensure we continue to make positive steps and achieve this goal,’ said Gaelle Vernet, group marketing manager for Bel UK.

Cathedral City said in a statement that it is currently trialling recyclable alternatives to its own nets.

Cheestrings were also found to be problematic, with packaging that was not recyclable in household collections.

Packaging for Dairylea Cheese Triangles, Seriously Spreadable Cheese and Laughing Cow triangles, meanwhile, is all recyclable – but all had this important information missing from their labels at the time of testing. 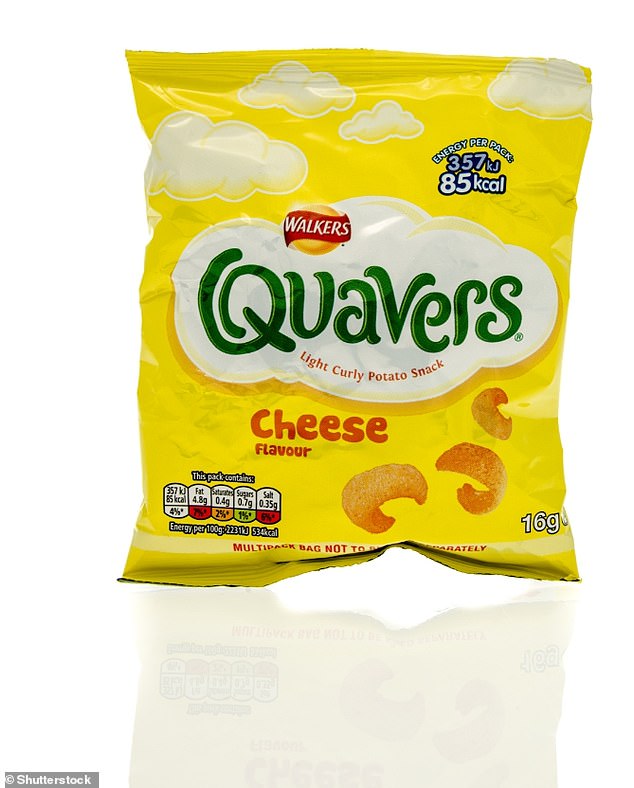 The ‘best of a bad lot’ in the crisps category was a Quavers multipack. None of the individual packets of crisps were easily recyclable, Which? said

Among the chocolate snacks Which? looked at, almost a third of packaging was not recyclable.

MailOnline has contacted Cadbury’s for comment about the report’s findings.

Galaxy Smooth, from the manufacturer Mars, had 100 per cent recyclable packaging, but due to a lack of labelling it risked being thrown out to landfill.

Nestlé, which owns the KitKat brand, said it’s committed to making all its packaging recyclable or reusable by 2025, by eliminating non-recyclable plastics.

It also has a partnership with TerraCycle that enables any plastic confectionery packaging to be collected for recycling at TerraCycle collection points.

The most recyclable category was fizzy drinks, which were found to be 100 per cent recyclable, and all 10 items Which? looked at in this category were labelled as such.

Juice drinks were mainly recyclable in household collections, with the exception of Ocean Spray and Capri-Sun.

Ocean Spray cartons are made of mixed materials that make them difficult to recycle in household collections, while Capri-Sun’s foil pouches are not recyclable.

Capri-Sun said its pouches use 80 per cent less material than an equivalent volume plastic bottle and that it’s hoping to provide a fully recyclable product by 2025.

‘UK consumers will be able to see some new recyclable updates to our packaging in the near future,’ Capri-Sun said.

In response to Which?’s findings, some manufacturers said that food waste had a larger carbon footprint than plastic waste. 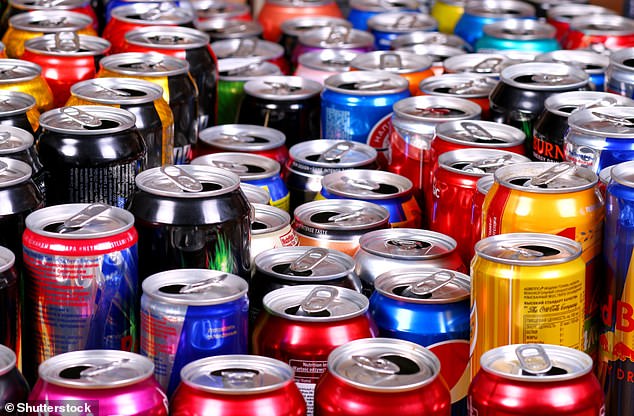 Fizzy drinks cans including Coca Cola and Red Bull are widely recyclable, unlike other forms of food packaging

Therefore, moving away from traditional packaging to recyclable alternatives could lead to compromised, stale or damaged food.

‘It’s important the Pringles can is sturdy as this ensures the crisps stay in perfect condition,’ said Kellogg’s, which owns Pringles.

‘So when we look at various other alternatives, we need to make sure that they don’t result in more food waste from broken and stale crisps.’

Kellogg’s claims it intends to ensure 100 per cent of Pringles packaging will be reusable, recyclable or compostable by late 2025.

Currently, 90 per cent of the Pringles can is made up recycled paper.

It also has a partnership with Terracycle in the UK, which allows people to recycle their Pringles cans at drop off locations across the country.

But a some manufacturers could be doing a lot more to ensure the materials used to package their products do not end up in landfill, Which? said.

For a start, products need to be correctly labelled with clear instructions of how packaging should be disposed of.

Which? is calling on the government to make recycling labelling simple, clear and mandatory, so that all consumers are able to make informed decisions when buying groceries.

HOW MUCH RECYCLING ENDS UP IN LANDFILL?

Every day, millions of us drop a plastic bottle or cardboard container into the recycling bin – and we feel we’re doing our bit for the environment.

But what we may not realise is that most plastic never gets recycled at all, often ending up in landfill or incineration depots instead.

Of 30 billion plastic bottles used by UK households each year, only 57 per cent are currently recycled, with half going to landfill, half go to waste.

Most plastic never gets recycled at all, often ending up in landfill or incineration depots instead. Around 700,000 plastic bottles a day end up as litter

This is largely due to plastic wrapping around bottles that are non-recyclable.

Shockingly, less than 0.4 per cent of these are recycled.

Most cups are made from cardboard with a thin layer of plastic.

This has previously posed issues with recycling but can now be removed.

Five specialist recycling plants in the UK have the capacity to recycle all the cups used on our high-streets.

Ensuring the paper cups end up in these plants and are not discarded incorrectly is one of the biggest issues facing the recycling of the paper vessels.