UAE’s Hope probe will reach Mars TODAY: Spacecraft is set to beat NASA and China to the Red Planet following a 500-million-km race from Earth

The United Arab Emirates will become the first Arab nation and only the fifth nation overall to place a spaceship in orbit around Mars later today.

Named Hope, the probe is expected to start the complex process of entering Martian orbit at 16:00 GMT – following a 500 million km race from Earth.

It will beat out the NASA and Chinese spaceships, also on their way to the Red Planet – but unlike those crafts, this one won’t be landing as it is an orbiter probe.

The goal of the mission is to complete an accurate survey of the Martian atmosphere, answering questions about the loss of oxygen and gasses to space. 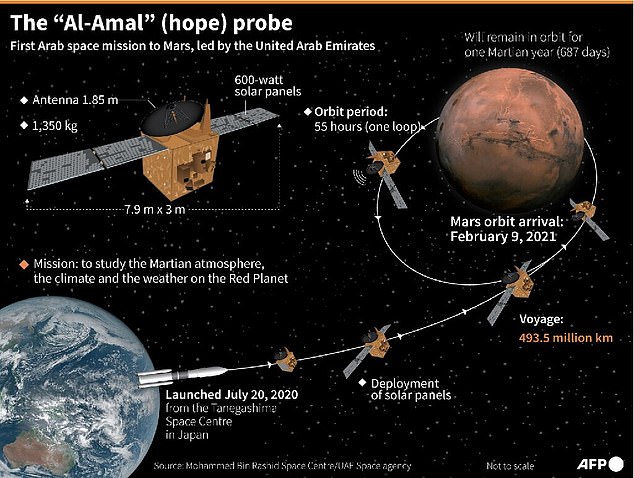 Named Hope, the probe is expected to start the complex process of entering Martian orbit at 16:00 GMT – following a 500 million km race from Earth 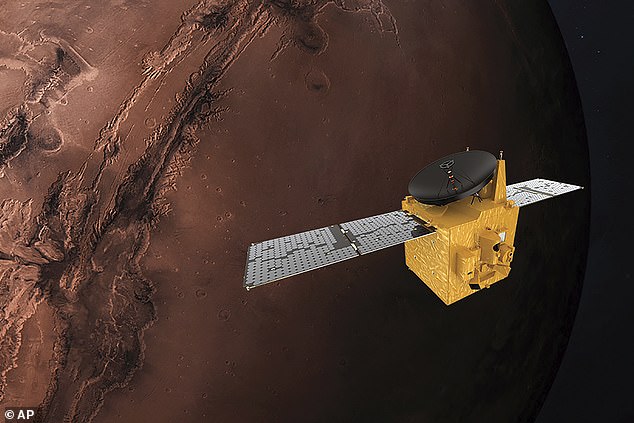 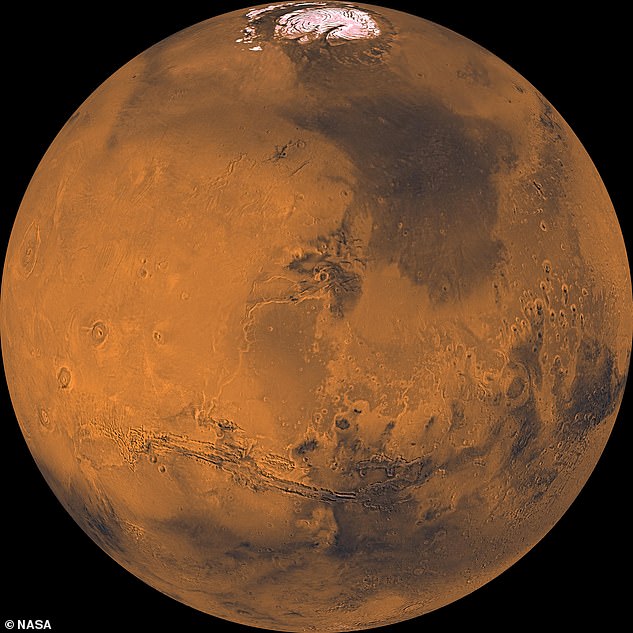 It will beat out the NASA and Chinese spaceships, also on their way to the Red Planet – but unlike those crafts, this one won’t be landing as it is an orbiter probe.

Entering Martian orbit isn’t an easy process, according to scientists. 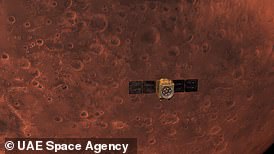 The probe will fire its rockets to rapidly decelerate to achieve Mars Orbital Insertion (MOI).

During the MOI the spacecraft is rotated to position it for a deceleration burn of 27 minutes, and slowed down from its cruising speed of 121,000 km/h to 18,000 km/h.

The stresses on the spacecraft of all engines firing at once are far beyond those at launch.

It will all happen with a 22-minute radio delay to Earth – so the probe will be managing on its own.

Around 10 minutes after the MOI burn, the probe flies into the dark side of Mars and enters a capture orbit.

The capture orbit takes the spacecraft from a distance of 1,000 to 49,380 km from Mars’ planetary surface.

The UAE, China and the US took advantage of a period last July when Mars and Earth were favourably aligned to launch their exploratory missions to the Red Planet.

Hope launched first on July 19 from Japan and is designed to take readings from the Martian atmosphere over the span of an entire Martian year – or two Earth years.

Also known as Amal – which is Arabic for Hope – this is the first deep space mission for the Gulf nation, which has long term ambitions for a Martian colony.

It will sit in an especially high orbit – 13,500 to 27,000 miles above the Martian surface and provide regular updates on the Martian weather.

‘We are quite excited as engineers and scientists, at the same time quite stressed and happy, worried, scared,’ said Omran Sharaf, project manager for the UAE, in anticipation of the first of the three scheduled arrivals.

There are currently six spacecraft operating around Mars – three from the US, two from Europe and one from India. The UAE hopes to make it seven with its mission.

Entering Martian orbit isn’t an easy process, according to the UAE scientists behind the seven month mission to get the probe to the Red Planet.

The probe will fire its rockets to rapidly decelerate to achieve Mars Orbital Insertion (MOI) – it will then maintain this capture orbit, calibrating and testing its science instruments, before moving to its science orbit.

During the MOI the spacecraft is rotated to position it for a deceleration burn of 27 minutes, and slowed down from its cruising speed of 121,000 km/h to something nearer to 18,000 km/h.

The burn to begin the deceleration will start at around 1530 GMT.

The stresses on the spacecraft of all engines firing at once are far beyond those at launch and it will be completed with a 22-minute two-way radio delay from Earth, requiring the probe to be highly autonomous.

Around 10 minutes after the MOI burn, the Hope probe flies into the dark side of Mars and after the Martian gravity captures it – it will enter a capture orbit.

The capture orbit takes the spacecraft from a distance of 1,000 to 49,380 km from Mars’ planetary surface.

In this phase instrumentation will be tested and the spacecraft will, over the coming two months, transition to its science orbit – due to be completed by April.

While it will be in daily contact with Earth during the capture orbit phase, in its science orbit, contacts will take place two to three times a week.

Each pass will be six to eight hours long – which is the only time the UAE team will have to download any data and send the probe any new updates or instructions. 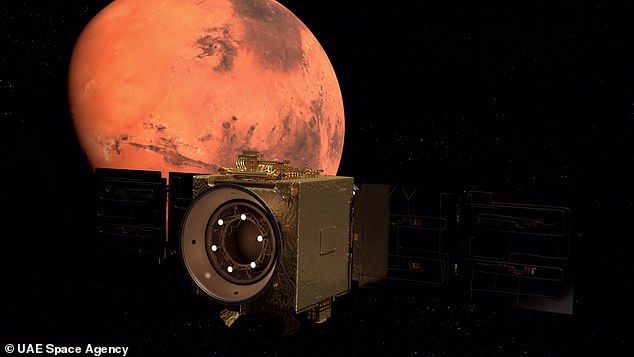 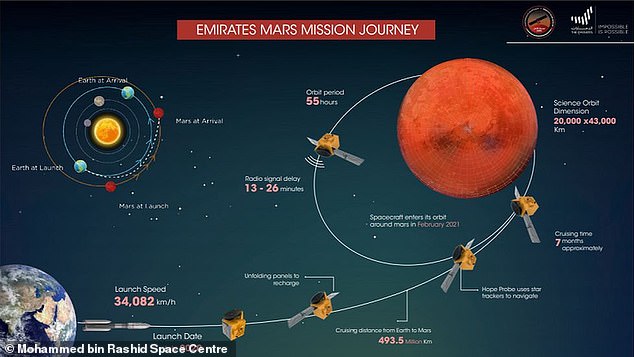 Sensors will help reveal the secrets of Martian climate 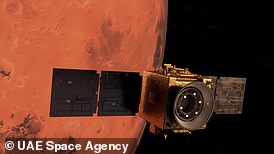 One will be a high-resolution camera dedicated to tracking dust movements and the ozone of Mars.

This will scan a range of light frequencies.

Another device will specifically focus on infrared and was built by scientists at Arizona State University.

This IR camera will measure both the upper and lower atmosphere.

The third sensor will be an ultraviolet spectrometer for measuring oxygen and hydrogen levels.

Hope will provide the first planet-wide picture of Mars’ weather system and climate throughout the Martian year, a UAE spokesperson said.

‘The data collected during this time will be open to scientists globally, contributing to humanity’s shared understanding of our second-closest planet.’

Both the UAE and China are newcomers to Mars, where more than half of Earth’s emissaries have failed.

Sarah bint Yousef Al Amiri, chairwoman of the UAE Space Agency, said she hopes the mission will be in a position to share data by September.

‘One of our primary objectives is to ensure that we share the data as soon as we are comfortable, as a science team, that the data is usable by scientists and the data is correct.

She added: ‘A lot of what we’re hoping to discover from the data of this mission is new, and this is a highly complimentary mission to other missions so we truly hope that others’ missions around Mars will utilise also our data.

‘And there’s actually talks with a few teams, who have spacecrafts around Mars, to see how we can further collaborate and expand all of our science so analysis capabilities utilising more and more data.’

The NASA Perseverance rover and the China Tianwen-1 are searching for signs of ancient life on the Red Planet – with Hope providing insights into how it lost its atmosphere – as the planet is thought to have once been Earth-like.

One of the biggest questions is whether life has existed beyond Earth, and Mars is a good place to start investigating, given that evidence points to it once being full of water, warmer and with a thicker atmosphere.

Future missions, including from the European Space Agency and Japan, will bring samples of Martian soil and rock back to the Earth for study.

SpaceX is planning to send an uncrewed mission to Mars using its Starship rocket by 2024 and with a crew by 2026.

THREE MISSIONS TO MARS IN THE SPACE OF 10 DAYS

There are three major missions bound for Mars in the space of just 10 days this month – the UAE’s Hope orbiter, China’s Tianwen-1 craft and NASA’s Perseverance rover.

The countries are taking advantage of a period when Earth and Mars are favourably aligned for a relatively short journey. 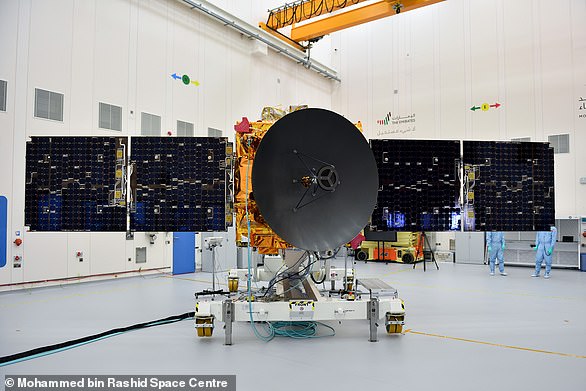 – The 2,970-pound probe was built entirely within the Emirates, launched from Japan and will take seven months to reach the Red Planet.

– Hope will not land on the Martian surface but take readings from the Red Planet’s atmosphere.

– Hope will help answer key questions about the Martian atmosphere and the loss of hydrogen and oxygen gases into space over the span of one Martian year – called a ‘sol’.

– Three instruments mounted on the probe will provide a picture of Mars’s atmosphere throughout the year, and all of the data gathered will be made widely available.

– This includes an infrared spectrometer to measure the lower atmosphere and temperature, a high-resolution imager to study the ozone and another to look at levels of hydrogen and oxygen up to 27,000 miles from the surface. 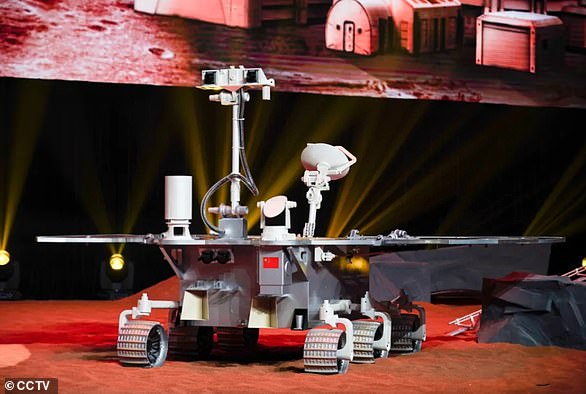 – This robotic spacecraft consists of an orbiter (stationed in the atmosphere), a lander (stationary on the planet’s surface) and a rover (roaming the surface).

– It will survey the composition, types of substance, geological structure and meteorological environment of the Martian surface.

– The solar-powered machine is designed to work on Mars for three Martian months, about 92 Earth days.

– It includes a geological camera, a multispectral camera, a subsurface detection radar, a surface composition detector, a surface magnetic field detector and a weather detector.

– A poem pondering on the stars and planets written over 2000 years ago was the inspiration for the name of China’s first exploration mission to Mars. 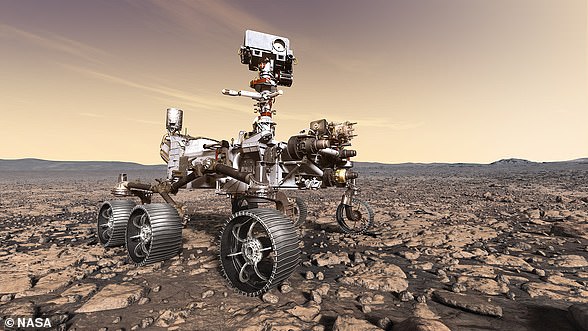 NASA’s Mars 2020 Rover will pick up samples of rock and soil from the red planet, deposit them in tubes and leave them on the ground for a future mission to return them to Earth.

The mission will seek signs of past microbial life on Mars and collect rock and soil samples for eventual return to Earth.

– The Mars Perseverance rover introduces a drill that can collect core samples of the most promising rocks and soils and set them aside in a ‘cache’ on the surface of Mars.

– The rover will travel using an ultraviolet laser to determine what minerals and compounds are present in the soil, based on the way the light scatters.

– The Mars 2020 rover, which was built at NASA’s Jet Propulsion Laboratory in Pasadena, California., is now at the Kennedy Space Center in Florida for final preparations.

– It launches to space on July 30 and is set to touch down on Mars in 12 months.