Raise a glass to that! Well-hydrated adults who drink water each day can slow down the ageing process and develop fewer chronic health conditions, new study suggests

Researchers found that drinking enough water each day ‘may slow down ageing’. The study of more than 11,000 over-30s tracked sodium levels in their blood, which increase with dehydration.

They found adults with higher levels of sodium were 64 per cent more likely to develop chronic diseases such as heart failure and strokes, lung disease, diabetes and dementia, and to die at a younger age. The US team suggested restricting water leads to DNA damage and inflammation, speeding up the ageing process. 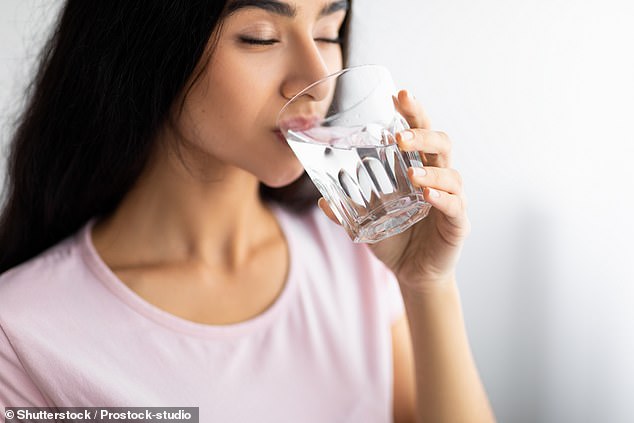 Dehydration causes short-term problems including dizziness, tiredness and headaches. Over the long term, it can also raise the risk of other issues including constipation, kidney stones and poor skin.

The study did not specify exactly how much water is needed, but the NHS Eatwell Guide recommends adults drink between six and eight cups a day – approximately two litres.

Lead author Dr Natalia Dmitrieva, from the National Institutes of Health in the US, said: ‘The results suggest that proper hydration may slow down ageing and prolong a disease-free life.’ The findings, published in the journal eBioMedicine, back up results from previous studies suggesting lower-than-normal hydration levels can cause a variety of factors known to increase age-related diseases.

Although a recent study by the University of Aberdeen found that drinking eight glasses of water a day may be too much for some people, this was only the case if they were getting enough liquids from water-rich foods such as soup.