A huge breakthrough in climate policy was signalled this week when China announced it will reduce its emissions to net zero by 2060.

It’s a potentially game-changing leap, following in the footsteps of the UK’s existing 2050 net zero target.

But promises are easy, actions are more challenging – and the UK has been steadily slipping from its climate targets.

It’s consistently promised tougher policies for the future, but for a few years, Britain’s long-term climate strategy has lain buried in fog.

We know the net zero carbon destination point, but we can’t yet see how the government intends to get there.

At last, in a contribution to the UN General Assembly (UNGA) on Thursday, the prime minister did briefly illuminate several paths towards carbon Nirvana.

But they’re only tantalising pointers to the direction of travel, when a full, clear properly funded roadmap is urgently needed. 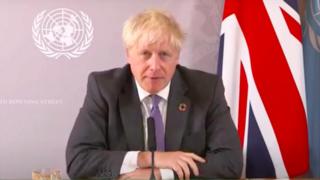 In previous years, climate policy was typically held up in different government departments.

But environmentalists say key policies are now stuck in a Downing Street logjam awaiting sign-off from the prime minister himself.

It prompts John Sauven from Greenpeace to plead: “Some of the ideas the government is proposing are really impressive – but the prime minister needs to resolve disputes within government on environmental policies. Now is the time for him to lead.”

The National Infrastructure Strategy will lay out plans for government to spend £100bn on big projects.

Past spending might have been dominated by new roads, but the government has gone quiet over its £27bn roads programme.

New roads will increase emissions, and the Covid experience suggests some of the roads cash might be more wisely invested in broadband instead.

Radical ideas are under discussion for redesigning city centres, and for providing new electricity networks that’ll be needed to power electric vehicles (EVs).

Emissions from transport remain high, but Mr Johnson is pinning his hopes on EVs. He told UNGA he’d spring forward the phase-out date for diesel and petrol cars.

It’s thought 2030 will be the new date, with plug-in hybrids allowed until 2035 – although that’s still in the fog.

Transport Secretary Grant Shapps accepts that overall car use must also fall because even battery-powered cars contribute to pollution. But that will need some behaviour change, which is against the PM’s instincts.

On aviation, the Citizens’ Assembly UK said people would support a tax on frequent fliers.

That would be truly radical, but Mr Shapps and Mr Johnson hope clean technology will allow travellers to escape guilt-free to the sunshine.

There are planning issues in transport, too. How does the government stop housebuilders building in places where people need their car to get a pint of milk?

Heat is a Cinderella problem – more than a third of UK carbon emissions are created by heat production.

Ministers are being pressed to announce a date when gas home boilers will be phased out.

Industries want incentives for low-carbon heat, and Mr Johnson’s UN remarks suggest he has been persuaded by the well-funded lobby trumpeting the role of hydrogen in heating and some transport, although that looks expensive.

The nuclear giant EDF is suggesting that nukes might be harnessed to generate heat, but there’s scepticism about this.

The government is also under pressure to stop buildings being demolished where possible, because new building materials create a lot of carbon emissions.

Mr Johnson told UNGA the UK could become the “Saudi Arabia of wind”.

Offshore wind no longer needs subsidy but progress is being delayed by a host of other factors, including their impact on birds, or fishing. It does need help.

To the dismay of some green campaigners, Mr Johnson also committed himself to nuclear power – although it’s not clear if that means the behemoth Sizewell C, or multiples of mini-nukes called SMRs.

Perhaps we’ll have both. But neither will happen unless the PM agrees government-backed funding.

The PM also declared himself for “evangelist” to the carbon capture technology that catches CO2 emissions from industry, albeit at a heavy cost. He said he’d previously been sceptical. How will this be funded?

Under international climate rules, each nation is obliged to produce its own decarbonisation plan. Mr Johnson is urging nations to join the UK in doing that on 12 December, the fifth anniversary of the successful Paris climate conference. But what will Britain’s revised target be?

In the past, the Treasury has often blocked climate policies, but since the net zero law was passed, observers say it’s been generally supportive. It needs to lay out how much the many commitments will cost.

Campaigners say it should go further, with a “green” reform of tax policy – especially on gas.

The chancellor has earmarked £3bn for energy efficiency – £2bn of it for households. It’s a huge job-creating measure, and the fund was due to be spent by the end of March.

But the insulation industry, which shrank when ministers previously withdrew funding, can’t now absorb all that cash. So the scheme is likely to be extended. Experts demand a 10-year funding plan.

The PM told UNGA a “green industrial revolution” would create hundreds of thousands of jobs, and quipped the UK “would never be lagging on lagging” (insulation).

While the PM was hailing the UK’s green leadership, he’s been accused of hypocrisy at home because he’s refused to ban the burning of peat moorland and the sale of peat for gardens.

Peat is the biggest store of carbon in the UK, but policies to protect it have been delayed after protests from country landowners.

Nearly two years ago the government published its outline Environment Bill, hailing it a flagship of legislation. But the PM has left this flagship becalmed in the Commons without a breath of Parliamentary time for nearly 200 days.

The Bill will set targets for improving air, water, waste and wildlife. It will also create an Office of Environmental Protection to replace the European courts.

But until it’s passed, that office doesn’t exist, so, on Brexit day, British citizens will lose their ability to appeal if their government breaks environmental laws.

Ruth Chambers from the pressure group Greener UK has lost patience. “Nature is in freefall,” she says. “The government’s promises look hollow.”

The Bill sets out the framework for UK farm policy after Brexit. The Lords are insisting it bans imports of chlorinated chicken and hormone-fed beef into the UK.

The government has repeatedly said it doesn’t want to import those goods – but insists it can’t have its hands tied in trade negotiations.

Farming is a major source of carbon emissions, and the government has been wrestling with policies that will cut CO2 from the land whilst also supporting farm businesses and restoring wildlife.

This is an issue of dizzying complexity – especially for farmers facing the shock of leaving the EU.

Ministers will be under pressure to risk riling their own supporters to eat less red meat to protect the planet – as well as their own health.

This long list – by no means comprehensive – demonstrates how seriously many departments are addressing what used to be considered a peripheral problem – the environment. It also reveals how difficult it will be to enact policies.

Chris Stark from the Climate Change Committee told me: “We’re in an unprecedented time.

“We look to the PM for some leadership… it’s desperately needed. But this feels like a very important and exciting period.”

Mr Stark is optimistic about the political outcome of next year’s Glasgow climate conference.

But he admits a caveat: we’ve got climate disruption with just one degree of warming so far, and the way things are looking we’e still heading towards a highly dangerous three degrees.