The world’s largest aircraft with a 383-foot wingspan recently took to the skies over the Mojave Desert in California to complete a six-hour test flight for a new record.

The Talon-A (TA-O) is a 28-foot-long reusable test aircraft that can carry payloads at hypersonic speed – more than five times the speed of sound.

The flight is a significant step for the company’s progress toward the separation test and its first hypersonic flight of TA-1 within the first half of 2023. 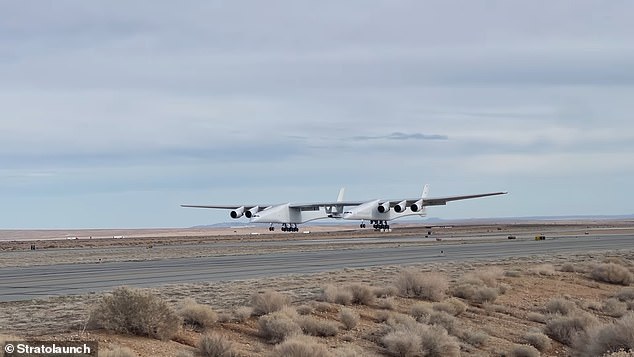 The primary objectives for Friday’s flight, which is the craft’s ninth take off, included flight outside of the local Mojave area for the first time and evaluation of the separation environment.

Zachary Krevor, Chief Executive Officer and President for Stratolaunch, said in a statement: ‘Our amazing team is continuing to make progress on our test timeline, and it is through their hard work that we grow closer than ever to safe separation and our first hypersonic flight tests.’

Talon-A is one of a series of rocket-powered Talon vehicles being developed by Stratolaunch that can reach speeds of up to Mach 6, or six times the speed of sound.

The Roc will now conduct a drop test of the Talon-A prototype over the Pacific Ocean in December, and, if successful, the company aims to debut its first hypersonic test vehicle, the Talon-A TA-1.

Stratolaunch is also progressing with the fabrication of its first and second fully reusable hypersonic vehicles, TA-2 and TA-3.

‘The thorough evaluation of release conditions will provide data to reduce risks and ensure a clean and safe release of Talon-A during future tests,’ Krevor said.

‘We are excited for what’s ahead this year as we bring our hypersonic flight test service online for our customers and the nation.’

Stratolaunch’s Roc is wider than the length of a football pitch from goal to goal, generally around 345 feet.

It weighs approximately 500,000 pounds without any cargo, but could take off at a maximum weight of 1.3 million pounds.

The plane rolls around with the aid of 28 wheels. Once airborne, it is powered by six 747 aircraft engines.

It’s been developed by a firm of the same name founded in 2011 by the late Microsoft co-founder Paul Allen, who debuted the massive craft to the world in 2019. 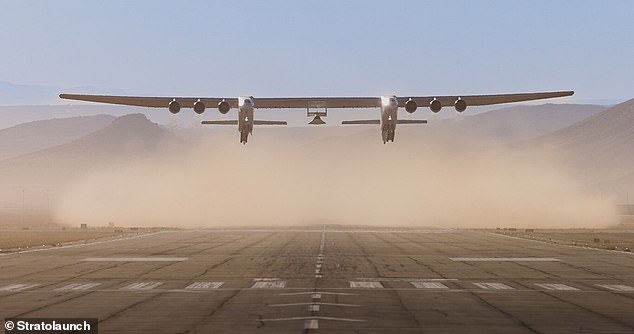 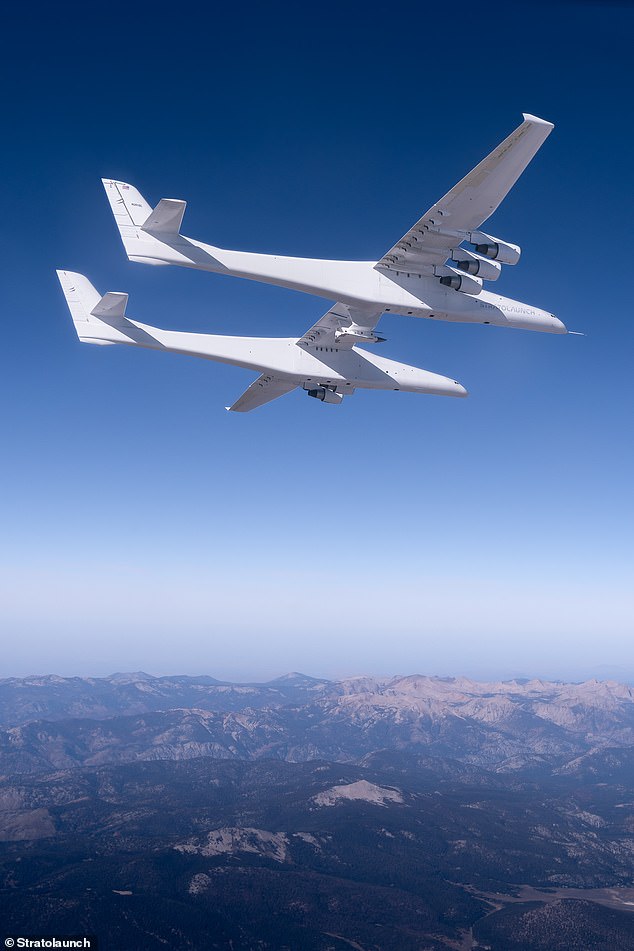 Stratolaunch’s Roc is wider than the length of a football pitch from goal to goal, generally around 345 feet

Allen died at the age of 65 in October 2018 due to complications from non-Hodgkin’s lymphoma, less than a year before Stratolaunch flew for the first time.

Allen intended for the Stratolaunch aircraft to launch satellite-laden rockets into space from the air, but following its maiden flight, it was bought out by Cerberus Capital Management.

The new owners of the ambitious operation initially plan to use it as a carrier aircraft for launches of reusable hypersonic flight research vehicles.

The H-shaped Roc aircraft has twin fuselages like a catamaran, a multi-hulled watercraft featuring two parallel hulls of equal size. 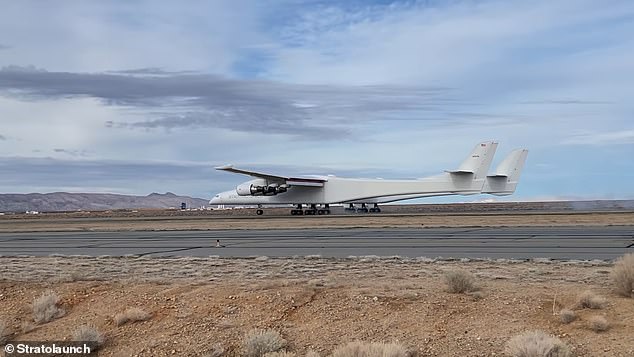 The flight is a significant step for the company’s progress toward the separation test and its first hypersonic flight of TA-1 within the first half of 2023. Here is Roc landing after breaking its record

Roc takes a three-person crew – pilot, co-pilot and flight engineer – who sit in the right-hand fuselage, steering the plane a fair distance to the right of the centerline, a bit like the Millennium Falcon in Star Wars.

The left-hand fuselage has what looks like a cockpit with windows to onlookers, but the section is empty and unpressurized.

As well as its record-breaking width, Roc has an impressive height – it stands 50 feet from the ground to the top of its vertical tail, which is taller than a four-story building.