Home » Science » Your dog can tell if you're cruel or just clumsy, study finds

Your dog can tell if you’re cruel or just clumsy: Pups are more patient with people who drop treats than with those who intentionally pull them away, study finds

Getting the ‘side-eye’ look from your dog can certainly make it seem like they are judging you, and a new study suggests they really could be.

Researchers at the University of Vienna found that pooches can tell when we dangle a treat out of their reach to be cruel, or when it is just an accident.

What’s more, they also act differently towards us depending on our perceived intention, as they appear more patient with the clumsy than the mean.

Only a few animals have previously been shown to be able to make social evaluations of humans in this manner, including chimpanzees, capuchin monkeys and African grey parrots. 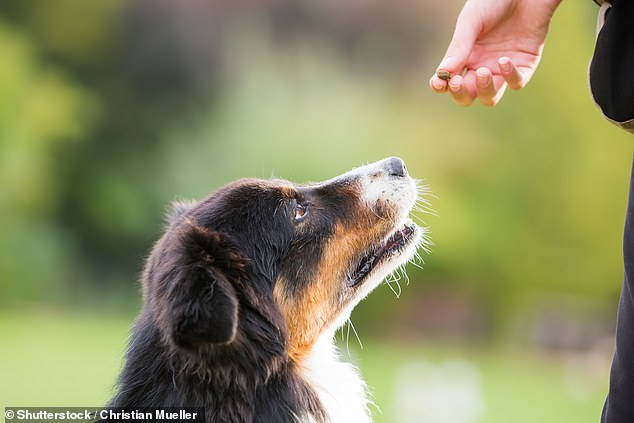 Researchers at the University of Vienna found that pooches can tell when we dangle a treat out of their reach to be cruel, and when it is just an accident

The team recruited 96 pet dogs for the experiment, and each was presented with one of two scenarios. These both involved the dog being placed on one side of a transparent screen with small holes in it at nose-height, and a human researcher standing on the other

Theory of mind is a higher cognitive function which allows individuals to understand others’ mental states.

It’s a skill that develops between 3 and 5 years of age in most human children.

Debate about whether any nonhuman species possess this ability has spanned decades.

Theory of mind is the ability to attribute mental states — such as beliefs, intents, desires, emotions and knowledge — to oneself and others.

This capacity is crucial for everyday social interactions.

In humans, those that lack the ability can suffer from autism, schizophrenia and ADHD.

The ability to read the intentions of others is an indicator of possessing ‘theory of mind’ – which was once thought to be exclusive to humans.

Theory of mind is the ability to attribute mental states – such as beliefs, intents, desires, emotions and knowledge – to oneself and others.

Studies have shown that this understanding of others intention develops in human children towards the end of their first year of life.

Dogs have adapted to living in human society through the evolutionary process of domestication, and have learned to read our behaviour and communicate with us.

Studies have shown that they have a preference to people who are more friendly or are generous with food, however it has not been linked to competency.

The authors wrote: ‘Understanding intentions might also be beneficial for nonhuman animals because it might allow them to interact effectively with social partners and competitors.’

For this study, published in Proceedings of the Royal Society B: Biological Sciences, researchers wanted to see if dogs can tell the difference between humans who are ‘unwilling’ or ‘unable’ to give them a treat.

If true, this would indicate that they understand the intentions behind our actions, as opposed to having just learnt a set of behavioural rules which link our actions to outcomes.

The team recruited 96 pet dogs for the experiment, each of whom was presented with one of two scenarios.

These both involved the dog being placed on one side of a transparent screen with small holes in it at nose-height, and a human researcher standing on the other. 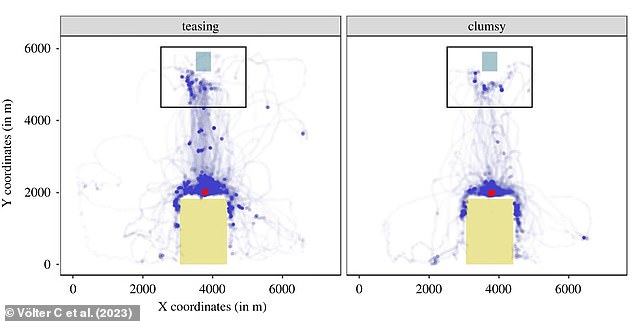 Plot showing the dogs’  roaming pattern in the two scenarios. The purple dots indicate areas visited by the dogs; darker purple areas were visited more frequently. The grey square indicates the researcher’s location, and the yellow square the location of the fenced area where the experimenter offered food. The black rectangle indicates the interest area around the researcher’s location. The red concentric lines highlight frequently visited areas

Dogs know when people are being deceitful, study suggests

Unlike children and primates, dogs generally know when people are being deceitful, a new study suggests.

Researchers at the University of Vienna performed experiments on a variety of pure breed dogs involving food obscured by buckets.

According to the experts, the dogs could follow their own intuition when given misleading instructions by humans about where the food was.

In the ‘unwilling’ scenario, the researcher would dangle a piece of sausage in front of the screen in a ‘teasing’ manner, and approach one of the holes.

But instead of passing it through the hole to the dog, they would then pull it out of its reach.

For the ‘unable’ scenario, the researcher would again move the treat towards the hole while the dog watched, but ‘accidentally’ drop it before they could pass it through.

In both scenarios, the dogs then had to wait 30 seconds before they were passed the sausage, while the researchers recorded their reactions with eight cameras.

After the experiment, a machine learning algorithm that had been trained to track the dogs’ body language analysed the footage.

Another study from 2021 tested for theory of mind in canines in a similar way, but the dogs were able to walk around the screen to get the treat after witnessing the researcher’s ‘unwilling’ or ‘unable’ behaviour.

The authors of this new study say that this is ‘not directly comparable’ due to differences in experimental setup.

They wrote: ‘The main finding was that the dogs walked around the barrier to approach the experimenter significantly sooner in the unable blocked and clumsy conditions than in the unwilling (teasing) condition.

The authors found that dogs looked at the researcher less often, sat or lay down more frequently and wandered around more after the ‘unwilling’ scenario.

They were much more patient with them after the ‘unable’ scenario played out, making more eye contact and staying closer to the screen.

These behaviours suggest that they still anticipated the treat even after the researcher dropped it.

The dogs also wagged their tails more in the ‘unable’ scenario, particularly to the right, which they are known to do more when they are happy and relaxed.

This is speculated to be because right tail wagging is accompanied by left brain activation in the prefrontal cortex, which processes positive emotions.

‘How exactly they acquire such behaviour- or intention-reading abilities will be an exciting topic for future research.’

Female dogs judge you when you make mistakes, study finds

Research from Kyoto University, Japan found that dogs do surreptitiously judge us when we make mistakes – but only if they’re female.

The two people were then given containers with food in to try and open, and the researchers found that female dogs looked significantly longer at, and approached the competent person.

In contrast, male dogs had no preference for either the competent or incompetent person in the food task.