Most of baseball’s 30 teams will hold their first official workout for pitchers and catchers on Wednesday. By the middle of next week, position players will join them — without a few well-known faces.

We knew we would not see Adrian Beltre, Victor Martinez, Joe Mauer, Chase Utley and David Wright, who have all retired after distinguished careers. We did not know that three prominent All-Stars from last summer — Bryce Harper, Craig Kimbrel and Manny Machado — would also be absent.

As those free agents also wait for jobs, the game goes on. The unsigned drift about like Tom Hanks roaming his old school grounds in “Big” wearing a business suit instead of his junior high baseball jacket. Kids still play ball in the park. His world still spins without him.

In absence of a boardwalk fortune-telling machine, we can’t predict where all those players will end up, and how the spring training story lines will change. For now, here are 10 sources of intrigue:

BOSTON RED SOX The Red Sox are seeking to become the first team to win consecutive World Series since the 1998-2000 Yankees. They open camp in Fort Myers, Fla., without Kimbrel, the closer they passed over to collect the final three outs of the World Series at Dodger Stadium last fall. Starter Chris Sale came in from the bullpen instead, and this season the Red Sox, despite bringing back almost their entire championship roster, must continue to improvise in relief: They lost Joe Kelly to the Dodgers in free agency, have kept Kimbrel in limbo, and have signed no replacements.

YANKEES In Tampa, Fla., the Yankees have no such worries. They brought back Zack Britton and signed Adam Ottavino, who will join Chad Green, Dellin Betances and Aroldis Chapman to form an imposing bullpen. The Yankees have fully embraced the modern pitching structure, emphasizing quality over quantity from starters. Only Luis Severino worked 180 innings last season, and the newcomer James Paxton — a six-year veteran — has never reached the 162-inning threshold to qualify for an earned run average title.

METS In Port St. Lucie, Fla., the Mets have a similar look. They also signed two veteran relievers — their former closer, Jeurys Familia, and the left-hander Justin Wilson — and traded for the All-Star closer Edwin Diaz. The National League East should be one of baseball’s most competitive divisions, but with Jacob deGrom, Noah Syndergaard and Zack Wheeler at the front of his rotation, the new general manager Brodie Van Wagenen concedes nothing. Van Wagenen has also improved the position-player depth for the Mets, who plan to spread around playing time to finally keep their roster healthy.

MIAMI MARLINS Down the road in Jupiter, Fla., the Marlins changed their uniforms but kept the same dominant color: funereal black. The teardown by Derek Jeter, their chief executive, continued with last week’s trade of J.T. Realmuto, the best catcher in baseball, to Philadelphia for prospects and catcher Jorge Alfaro, who last season became the first player to record more than 130 strikeouts, fewer than 20 walks and no more than 10 home runs in a season. On Tuesday, at least, Jeter did add a catcher with a sterling résumé: his old pal, Jorge Posada, who joined the organization as a special advisor. 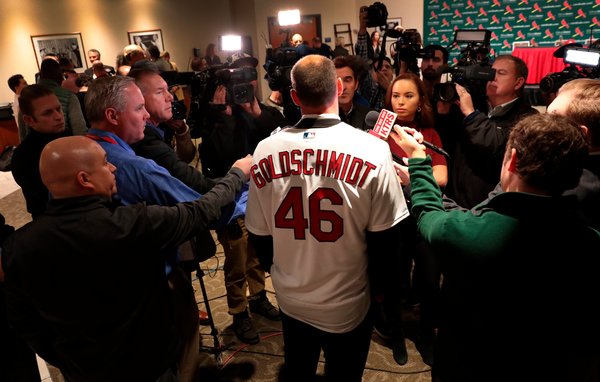 ST. LOUIS CARDINALS While Realmuto is gone from Jupiter, another star arrived, on the Cardinals’ side of the complex: first baseman Paul Goldschmidt, acquired in a trade from Arizona in December. Goldschmidt is the kind of slugger the Cardinals have missed since Albert Pujols left after the 2011 season, and also brings a good glove to the team that led the majors in errors last season. The Cardinals also signed reliever Andrew Miller as they seek to get back to the playoffs for the first time since 2015.

SEATTLE MARINERS That postseason-less stretch is a small fraction of the longest playoff drought in the majors. The Mariners, who train in Peoria, Ariz., have not been to the playoffs since 2001, when a rookie named Ichiro Suzuki arrived from Japan. Suzuki, 45, is back this spring after an awkward shutdown last May. The Mariners open this season in Japan, where expanded rosters will make it easy to accommodate a homecoming for Suzuki, who has piled up 4,367 hits since he began with the Orix Blue Wave in 1992. Suzuki actually fits the theme of this roster, which has been loaded with veteran placeholders by Jerry Dipoto, the aggressive general manager who is building for a brighter future that never seems to arrive.

LOS ANGELES ANGELS Dipoto was the Angels’ general manager for their last playoff appearance, in 2014, when they were swept in three games by Kansas City. That remains the only postseason experience for the incomparable center fielder Mike Trout, who reports to Tempe, Ariz., with just two seasons left on his contract. Trout, the pride of Millville, N.J., attended the Philadelphia 76ers’ N.B.A. game against the Lakers on Sunday, and he wasn’t rooting for the team in purple. The Angels hope to convince Trout to resist the pull of home and spend his entire career in Anaheim, but they have made only modest investments this winter, spending about $32 million in one-year deals for catcher Jonathan Lucroy, starters Trevor Cahill and Matt Harvey (remember him?) and closer Cody Allen.

CLEVELAND INDIANS Cleveland shed Allen and Miller from its bullpen, and also parted with eight different hitters who started in the playoffs: Yonder Alonso, Michael Brantley, Melky Cabrera, Yandy Diaz, Josh Donaldson, Edwin Encarnacion, Yan Gomes and Brandon Guyer. Another, the star shortstop Francisco Lindor, strained his right calf recently and might not be ready by opening day. The Indians can still smile when they watch their talented starters train in Goodyear, Ariz., but the fragile state of the rest of this roster just might give an opening to someone — anyone? — in a very weak American League Central.

CHICAGO CUBS Like Cleveland, the Cubs have returned to the playoffs in both seasons since the two clubs faced off in a thrilling World Series in 2016. Last season, though, Chicago collapsed over two dreary days at Wrigley Field, losing a one-game division playoff to Milwaukee before dropping the wild-card game to Colorado. The Cubs train in Mesa, Ariz., where Manager Joe Maddon lives. The Cubs have replaced several of Maddon’s coaches recently and did not extend his contract beyond this season — if they start slowly in Chicago, might they give him a one-way ticket back to Mesa?

CINCINNATI REDS The N.L. Central should be a challenge again, because even the worst team is trying. Before their current stretch, the Reds had not finished in last place across four consecutive seasons since the 1930s. They’re tired of it, and bring a rebuilt rotation to Goodyear, Ariz., with Sonny Gray, Tanner Roark and Alex Wood joining Luis Castillo and Anthony DeSclafani. The Reds also acquired outfielders Matt Kemp and Yasiel Puig from the Dodgers, and hired friendly faces to new manager David Bell’s staff. The pitching coach Derek Johnson worked with Gray at Vanderbilt, and the hitting coach Turner Ward knows Puig from Los Angeles. Puig liked to kiss Ward after homers as a Dodger, so perhaps he will show up early to Reds’ camp on Thursday — Valentine’s Day.