Emerging tennis star Annerly Poulos has set her sights on reaching a ranking high enough to secure her a spot at the four junior grand slams next year as the teenager continues her rapid development.

Canberra junior Poulos won the ITF Australian winter championship in Sydney last weekend and will leave the capital on Thursday for a four-week stint in Europe. 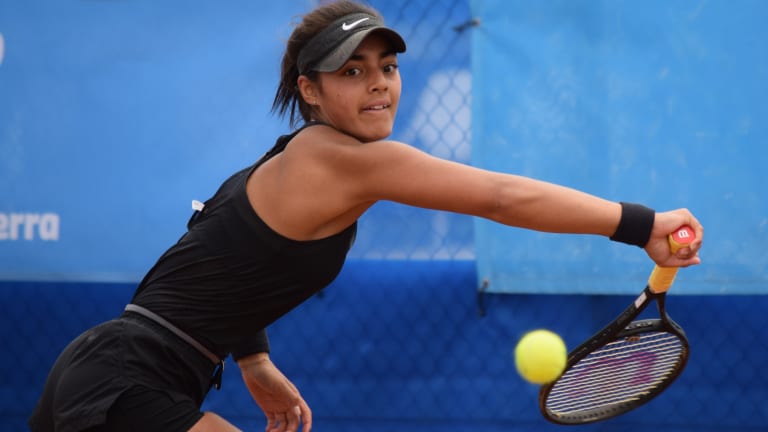 Annerly Poulos has set her sights on the junior grand slams next year.

She will play for the Australian junior Fed Cup team for the finals in Budapest at the end of September, as well as competing in tournaments in Italy and the Netherlands.

But she has her eyes firmly on the next step of her singles career and she wants to play at the junior events at the Australian Open, French Open, Wimbledon and the US Open to help open doors to the main draw in the coming years.

Poulos was given a junior Australian Open wildcard at the start of this year, making the second round after winning the national under-16 championship.

"I'm just working towards building up my ITF ranking so when next year comes, I'll be eligible to do the junior grand slams," Poulos said.

"That's what I'm hoping for. To be able to go to those grand slams and hopefully do well is something [I'm targeting] and if that goes well, try to get into the main event to make the jump from the juniors.

"It's definitely something I want to do and it would be amazing to get there [next year]. If I keep [focus] and do what I've been doing now, I should be fine."

Poulos has an ITF junior ranking of 277 and beat junior world No. 44 Violet Apisah on her way to the title in Sydney.

Poulos has jumped more than 150 spots in recent months as she spends more time on her tennis development and eyes tournaments overseas.

She has already played in Sydney, Fiji, the Gold Coast, the United States, Melbourne and New Zealand this year as she attempts to make her mark.

Poulos is also now being home schooled to help her juggle her training and playing commitments.

"I was overjoyed to win in Sydney. I had to go through [qualifying] as well because I didn't enter. But it was easier because it gave me the extra matches and built my confidence for the main draw," Poulos said.

"We're leaving this week to go to the Fed Cup and will have four weeks in Europe. We'll play a few more tournaments over there to get some more matches in and build our ranking."