There was a magical touch to Coolmore Stud’s parade day in the Hunter Valley on Sunday: a guest-of-honour appearance by retiree Encosta De Lago to start the extravaganza. 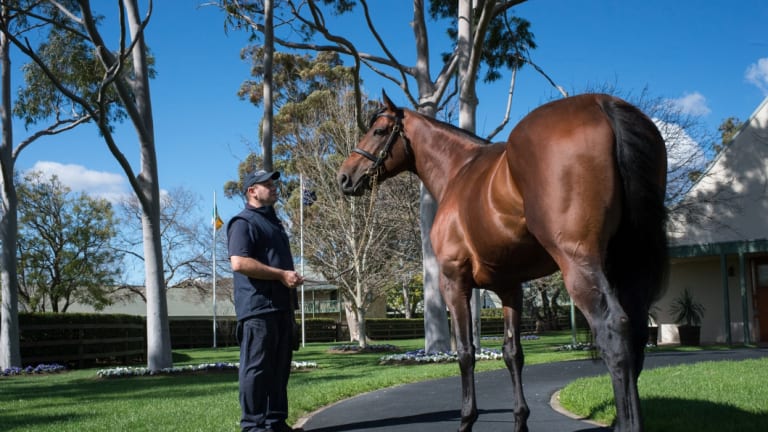 Coolmore had 14 superb stallions readying for a hectic 2018 covering season on show, but the big crowd of horse lovers were pleasantly surprised with Encosta De Lago showing just how Coolmore looks after its retired stallions. The son of Fairy King and Shoal Creek was pulled out of service in 2015 due to fertility issues but has won the past three titles as Australia’s leading broodmare sire.
The 2017-18 season was unquestionably the best by the 25-year-old stallion, which established an Australian record with earnings of $23,079,332. He had 682 runners represent him and 325 were able to win with 10 stakes winner including three at group1 level.
Encosta De Lago seemed completely at home while parading and received terrific applause, as he should as one of the country’s most accomplished stallions of the past two decades.
It was only fitting that Encosta De Lago’s fastest son Rubick was the first of the 2018 Coolmore stallions to be paraded and he looked super. Rubick’s speed displays during his career were memorable and he was afforded a huge first-up book of mares whose first yearlings made it to the sale ring earlier this year.
He sold brilliantly with 29 of his first crop making $100,000 or more with three lots selling for $400,000-plus and entering the stables of some of the country’s best trainers.
Coolmore’s marketing and sales manager Sebastian Hutch told Bloodlines that Rubick’s book had the house-full sign posted over a month ago. ‘‘We had an amazing number of inquiries during that period and the word was out from the racetracks that trainers with Rubick’s progeny were rapt in their attitudes and their ability.’’
Trainers with multiple Rubick two-year-olds on their books include Brad Widdup (6); Gerald Ryan and Waterhouse/Bott (5); Darren Weir (4); Peter and Paul Snowden, Bjorn Baker, Anthony Freedman. Ellerton/Zahra, David Pfeiffer and Matthew Dunn (all 3); and Hayes/Dabernig, John O’Shea, Mark Kavanagh, Matthew Smith and Paul Perry two each.
Rubick’s book was increased by 60 mares at his service fee of $17,600.

American idol
One of the main reasons for a hit-and-run visit to the Hunter Valley on Sunday was to view the shuttle stallions as well as the Australian stars assembled at Coolmore.
The most anticipated sire was the US Triple Crown hero American Pharoah, who had arrived ready for another limited full book from Australasia’s most successful breeders. Onlookers were in awe of his appearance. He strutted around the circuit splendidly and it was a pleasure to see what a magnificent individual he is.
American Pharoah’s service fee of $66,000 including GST is a bargain, especially when one takes into account the huge sums his first crops have sold for in the northern hemisphere recently. Six of his first crop have already made seven-figure sums in America, Japan and France and with his first foals being born in Australia and New Zealand, one cannot wait until they enter our sale rings.
Scat Daddy, the sire of American’s latest Triple Crown winner Justify, has two of his sons at Coolmore with No Nay Never make his second visit and Caravaggio lining up for his debut year in the southern hemisphere.
No Nay Never is making waves in Europe with his first crop of two-year-olds having produced 19 individual winners. His progeny are showing the brilliance which won him four races at two and three including the group1 Prix Morny at Deauville.
Caravaggio is a stunning individual with the grey entire’s body almost covered in dapples, and John O’Shea declared him ‘‘one of the best-moving horses I have ever seen’’. He’s a precocious type with the colt unbeaten in his four two-year-old starts and a three-time winner at three. He won two group1s and Aidan O’Brien described him as the fastest horse he had trained. He was Timeform’s top-rated two-year-old in Europe in 2016 ahead of Churchill.
Churchill was also strutting his stuff on Sunday. He is in the mould of Galileo’s best son Frankel with the colt having won four at group1 level and three other black-type victories.

Hello sailor
Switching attention to the Australian-breds and Merchant Navy was the one everyone wanted to assess after his winning performances at Royal Ascot and at The Curragh beforehand.
Merchant Navy is rightly regarded by the Coolmore team as heir apparent to Fastnet Rock. He won the group1 Coolmore Stakes at Flemington and then was superb in his Golden Jubilee success at Royal Ascot.
‘‘He’s got a full book to contend with coming up next week and will serve close to 200 mares and then he returns to Coolmore’s Irish base and already has close to a full book,’’ Hutch said. ‘‘He has shown his durability in his races and has settled brilliantly since being retired. He is one of Fastnet Rock’s best-looking sons and his future is just so exciting.’’

But one cannot help but be also captivated by the appearances of Vancouver, Pride Of Dubai, Pierro and So You Think with the first pair having yearlings on the ground whereas the latter two are already household names.
Whereas Encosta De Lago started the hour-long parade compered by James Bester, there was also a great finale with Fastnet Rock the last of the 14 stallions to entertain the big crowd. Bloodlines has never seen his dapples bursting out as they were on Sunday, an indication that he is thriving.
FOOTNOTE: Coolmore had a special auction to assist the Buy a Bale/Rural Aid charity with services to three of its stallions privately auctioned over the past fortnight. Pierro fetched $88,000 (his 2018 fee) from Alice Cameron; So You Think $46,200 to Fairhill Farm; and Rubick ($19,200) – a total of more than $150,000 to the drought relief appeal.
Brought to mind a previous charity auction when Coolmore was offering a covering to Encosta De Lago in 2009 in aid of the Victorian bushfire appeal. It was purchased by the Throsby family. Edwina Throsby is in the ownership of Chautauqua, who was the result of that service to Encosta De Lago.