Invincible Star has one weapon in her armoury which could prove the key to The Everest.

Co-trainer Adrian Bott has seen it from the first time she galloped. Invincible Star showed sheer speed as a two-year-old to win at Flemington on Melbourne Cup day and last spring made all twice before just being gunned down by Merchant Navy in the Coolmore Stud Stakes. 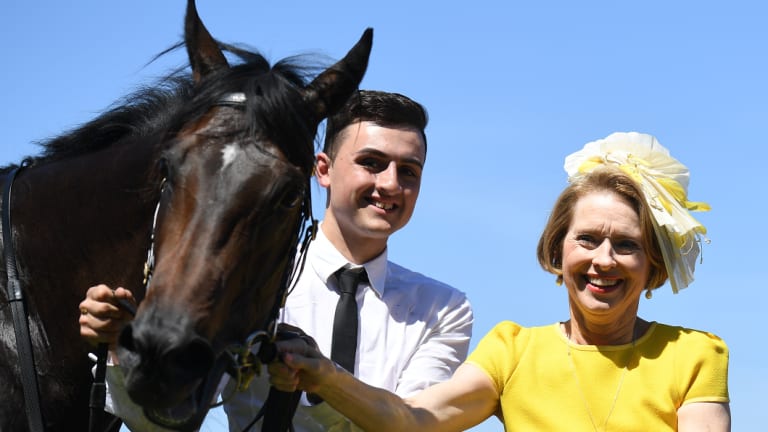 Star on the rise: Gai Waterhouse with Invincible Star after she won the Thoroughbred Club Stakes at Caulfield last spring.

“She has always been free-running and she has got the ability to fly along in good sectionals without too much effort,” Bott said. “Natural speed is something you can’t train but you can use.

“She has that and a bit of x-factor.”

Invincible Star missed the autumn and returns after having chips taken from her knees, but the speed is still there. There are no lingering effects and GPI Racing have given her a slot in The Everest without seeing her race this time in.

“There might have been a bit of discomfort there before, which is not there now,” Bott said. “She has been awesome since she came back into the stable this time and is perhaps the most exciting horse we have had since I have been training with Gai [Waterhouse].”

Trials and a rousing track gallop were enough to gain a slot in The Everest. The numbers were impressive. Invincible Star broke 33 seconds for the final 600m in her first barrier trial beating Super Too before a second trial where she spaced her rivals without Tim Clark realising he had won by almost 10 lengths.

“In both the trials we just told the riders to get her into a rhythm and that’s what they have done,” Bott said. “She can run those times without too much effort.

“When Tim came back from the second trial he didn’t know what she had done to them. He just said she got in a beautiful rhythm and felt like she was doing it easy.

“He was quite surprised with how quick she went but that is what happens with her.”

James McDonald takes over for raceday as Invincible Star takes on defending Everest champion Redzel in the Concorde Stakes at Randwick on Saturday.

Redzel is also a horse that likes to control the tempo and will give a good test for the four-year-old.

“Redzel has been a benchmark for sprinters, so we get a good indication of where we stand,” Bott said. “We are looking at another run before The Everest, so she is going to have improvement left in her. She has her best in front of her.

"She is ready to go to the races and show what she has got."

Meanwhile, Tulloch Lodge's other Everest runner English will trial again on Monday before resuming in The Shorts in a fortnight at Randwick.

“She is coming along very well and we are going to use a similar preparation to last year," Bott said.