ACT Brumbies recruit Toni Pulu is coming to Canberra to make a statement.

Not only does the 29-year-old want to play every Super Rugby game next season for his new club, but he wants to be a Wallaby.

Pulu's mother is Australian and the former Waikato Chiefs winger has an Australian passport. 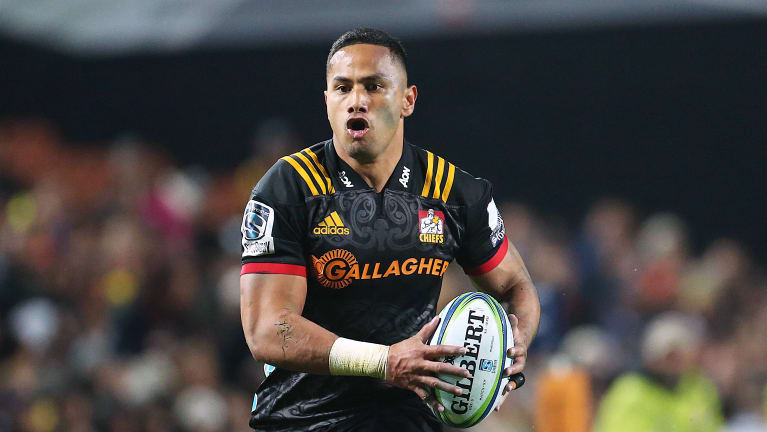 Brumbies recruit Toni Pulu wants to be a Wallaby.

After being born in the USA, he lived in Sydney before moving to New Zealand and beginning his rugby journey.

Originally, he wanted to play for the All Blacks, but injuries have interrupted his career and now he's drawn the curtain on that and set a new goal of pulling on the gold jersey instead.

Helping his cause, World Rugby has already cleared him to be eligible to play for Australia if Wallabies coach Michael Cheika wants to come calling.

It wouldn't be the first time Cheika has picked a Kiwi Brumby before he's played a game for them – Canterbury Crusaders forward Pete Samu made his Wallabies debut almost before the ink had dried on his Brumbies contract earlier this year.

"The goal was always to put the black jersey on, but circumstances due to injuries has held me back a bit," Pulu said.

"[But] I'm drawing a curtain on it. I'm an Australian citizen so I want to try and put my foot forward and see what I can do for the Brumbies and see what happens after that.

"If I ever put on that Australian jersey it will be one of the highlights of my career. I'm just looking for an opportunity to play at the highest level."

Pulu was once dubbed the "quickest man in New Zealand" and scored 14 tries in 32 Super Rugby games for the Chiefs.

But he's been hampered by injuries that have interrupted his career.

He's had two ankle operations and had a patella reconstruction last year, which he put to test this season and was happy with the result

Now he wants to put all that behind him and was excited about his move across the ditch on a two-year contract.

Pulu wasn't pulling any punches about the impact he wants to make when he gets here.

He and his partner will arrive in Canberra in November once he's finished playing Mitre 10 Cup for Counties Manukau, where he met soon-to-be-teammate Andy Muirhead.

"I'm excited and can't wait. I've played for Chiefs for four years and I'm going to miss the environment, but at the same time I'm excited for this new challenge."

Part of the attraction of coming to Canberra is the Brumbies' style of play.

Their attacking brand of rugby started to click at the end of the Super Rugby season under first-year coach Dan McKellar and they narrowly missed out on playing finals.

Being part of a backline that has players like Fijian flyer Henry Speight and Wallabies bolter Tom Banks in it was something he's looking forward to.

"They play a similar sort of rugby to what they play at the Chiefs. They have some exciting players there in the likes of Tom Banks and Henry Speight, who has been here and I know quite well, and Andy," Pulu said.

"They play an exciting brand of footy and that weighed in on my decision of coming over.

"They're a quality side and it's a shame they missed out [on finals] this year and I can't wait for next season."