It will be Australian against Australian in the first round of the WNBA play-offs with the Liz Cambage-led Dallas Wings taking on a Phoenix Mercury squad loaded with Opals.

The sudden-death game will be played in Phoenix on Tuesday (Wednesday 10.30am AEST). 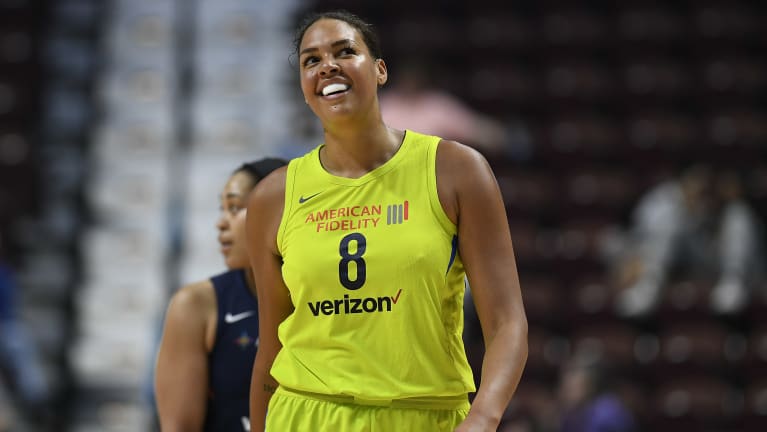 Liz Cambage’s Dallas Wings are heading to the WNBA play-offs.

The 203-centimetre-tall Cambage has been the most dominant player in the WNBA averaging a league high 23 points and adding 9.6 rebounds a game, including a WNBA record 53 points last month and 43 points last week.

She has fellow Australian Cayla George in Dallas after the 29-year-old's mid-season switch.

The Mercury are coached by Australian Olympic coach Sandy Brondello and include Leilani Mitchell, Stephanie Talbot and director of player development and performance Penny Taylor.

The Mercury are expecting a titanic game.

"Our only focus is on Dallas," Brondello said on Sunday after the Mercury beat the New York Liberty 96-85 in Sunday's regular-season finale to secure the fifth seed.

"That's a tough team and a team we've lost to, but we're playing well so we have to go in with that confidence as well."

The Wings lost 84-68 against the top-seeded Seattle Storm in their regular-season finale on Sunday.

Dallas sneaked into the play-offs as the eighth and final seeds.

Cambage will go head-to-head with one of the WNBA's best centres, Brittney Griner, in the first-round clash.

The Mercury won two of the three regular-season meetings this season, although the Wings were victorious 101-72 in the most previous encounter on July 10.