Canberra Olympic have made a statement to keep their Canberra premier league title hopes alive and inadvertently set up a premiership play-off.

Olympic thrashed the Cooma Tigers 7-0 in a rescheduled clash at the AIS on Wednesday night to set up a premiership-deciding showdown with arch-rivals Canberra FC. 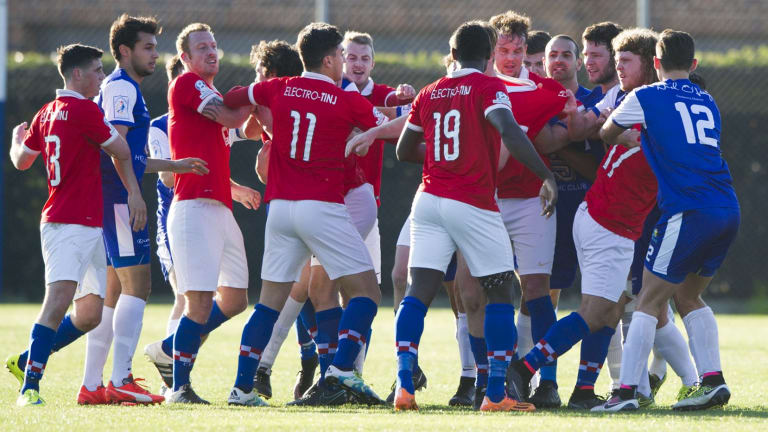 Canberra FC and Canberra Olympic are on a collision course.

The stunning victory over the third-placed Tigers has nudged Olympic to within two points of Canberra on the Canberra premier league table.

Canberra and Olympic traded wins in their two meetings this year and the league title will be decided when they square off on at O'Connor Enclosed Oval on Sunday.

The two powerhouse clubs have dominated the Canberra men's soccer scene for the past decade and between them have won 16 of the past 18 league titles.

They haven't had quite as much success on grand final day but have still won 10 of the past 15 championships and once again they've been the two best teams this season.

It doesn't end with a league-title deciding clash either – Olympic and Canberra will meet in the first week of the finals, with the victor booking a ticket straight to the grand final.

The loser will then meet the winner of the minor semi-final between Cooma and Tuggeranong United for a spot in the big dance.

Olympic's recent showing might have Cooma shaking in their boots if the two sides meet again this season, after Stephen Domenici and Nik Popovich scored doubles in the thumping win.