Canberra Raiders prop Luke Bateman says they've underachieved in missing out on the NRL finals, but admits injuries and suspensions have taken their toll.

The Raiders came under fire from former St George Illawarra hooker Mark Riddell for only playing finals once in the last five seasons, but the Green Machine players said coach Ricky Stuart had done everything he could.

They face a massive challenge against the ladder-leading Sydney Roosters at Canberra Stadium on Sunday, where they're looking for their first win of the season against a top-eight side. 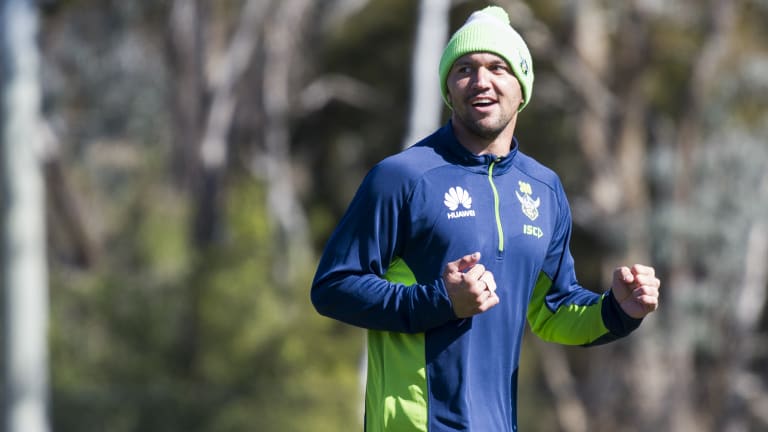 Bateman said the team hadn't "put the cue in the rack" and would look to finish the season strongly over the final three rounds.

He said the squad didn't feel pressure after missing the finals two seasons in a row, just disappointment.

"We're pretty confident that we've got a good squad here and we can play good enough footy to be in the top eight so it's definitely a massive disappointment and underachievement in terms of where we see ourselves at," Bateman said.

But the Raiders have been hit hard by both injuries and suspensions this season, especially through the spine of fullback, hooker and the halves.

With Hodgson's knee reconstruction ruling him out of the opening 14 rounds and Jack Wighton's suspension the final 10, it's meant Hodgson's only played one game with the Raiders' regular fullback this season.

Both Sam Williams (four) and Aidan Sezer (three), who started the year as the Raiders' first-choice halves, have had injury interrupted season, with the latter missing the Roosters game through a hamstring strain.

Shannon Boyd (three), Junior Paulo (five) and Jordan Rapana (three) have also spent time on the sideline, while the rest of the squad has also taken a hit.

Bateman said it was something they had to deal with.

"But every team has injuries. We've been fortunate. We've got good blokes that fill those roles, play out of position, don't whinge about it and just get on with the job.

"It probably hasn't been the best season in terms of injuries and the continuity of the team, but that's just things you've got to deal with."

With the NRL coaching circus in full swing, Riddell questioned why there wasn't more scrutiny on the Raiders and instead of on his former Dragons teammate Paul McGregor.

McGregor's come under fire because the Dragons team he coaches have lost five of the past six games, despite sitting fifth on the ladder.

Other top eight sides were also involved in coaching controversy, with Brisbane mentor Wayne Bennett's future up in the air and Penrith sacking Anthony Griffin.

But the 10th-placed Raiders have largely been overlooked. Both Rapana and Bateman backed Stuart.

"We were very unlucky with a lot of injuries and suspensions. [Stuart] did the best he could and the players he brought in were the right players and they did their best," Rapana said.

"It's been a tough year and really looking forward to letting this one go and moving on to next year.

"We have full belief in every player that comes in here and I know Ricky does too, that's why he plays them. The players that we did miss were key players and they've been sorely missed."