Canberra Capitals coach Paul Goriss has backed a fitter and stronger Lauren Scherf to make her mark on the WNBL season this after she announced her arrival as a scoring force on Friday night.

But Scherf and her teammates have been warned to avoid the hype of their round-one win against Sydney to ensure the Capitals don't suffer another early-season disaster this year. 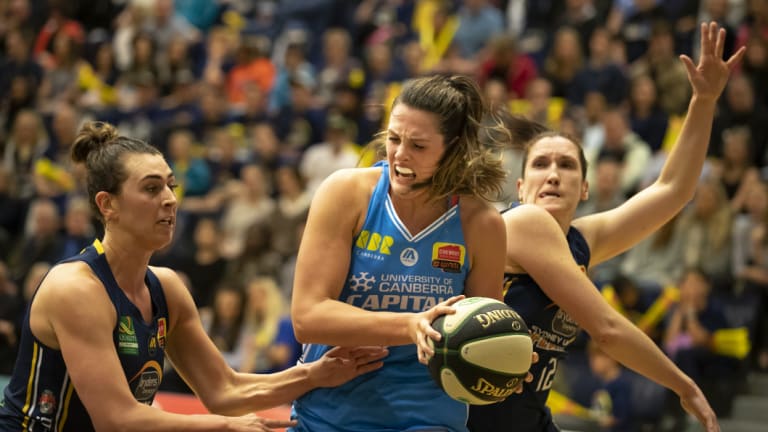 Lauren Scherf, centre, stepped up in the first game of the season on Friday.Credit:Sitthixay Ditthavong

The Capitals made a statement with a dominant win against Sydney 97-78, giving them the perfect launching pad for a new era and an attempt to end their finals drought misery.

Scherf scored 22 points in one of her best games for Canberra after Goriss challenged her to rise to a new level this season and fill the void left by injured captain Marianna Tolo.

"We had a real heart to heart at the end of last season about [Scherf] needing to come back in better shape and it's a credit to her and the people at Diamond Valley in the SEABL, she's come back with a sharper focus," Goriss said.

"It's her time. She wants to be an Opal and a player, she has to be able to produce. I'm happy that her hard work paid off. We've had open conversations about her future.

"You've got to treat the game with respect and work harder. She can be an Opal of the future, now is her time. With Tolo out, I said to her the starting spot is hers if she wanted it. We've got a great team around her, too.

"That helps, but Lauren is also more confident because she's done the work."

Most of the hype about the Capitals this season has been around their marquee recruits Tolo, Kelsey Griffin, Leilani Mitchell and Kia Nurse.

Mitchell is hopeful of playing in Canberra's games next weekend, while Tolo will make her comeback on November 18 after having her second knee reconstruction.

Nurse scored 26 points in her WNBL debut and Griffin was impressive with eight points and seven rebounds.

But Scherf led the rest of the roster, which also included strong performances from Kelly Wilson, Keely Froling, Maddison Rocci and Kaili McLaren.

The Capitals won their opening two games last season, but then lost 11 games in a row and missed the finals. The club hasn't played finals since the 2009-10 grand final.

"That was a good way to start the season, but one game doesn't make a season. It was an impressive start for the new group," Goriss said.

"People were writing us off early in the season [because of injuries], and we wanted to make a statement. We've got to be ready from the get-go."