An NRL season is a test to see whether the bonds which tie a club together can withstand the forces which seek to pull it apart.

The Sea Eagles' predicament is a case in point but it’s also a thought which persisted during a month I recently spent in England and France, early mornings spent deciphering Australian media reports on rugby league. 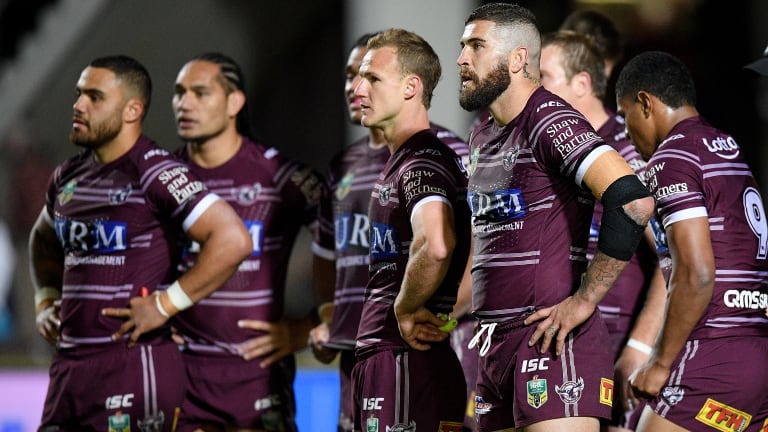 Club in crisis: Manly have endured one drama after another.

Most of my time was spent at Cambridge University, where I enrol in a course every year or two.

Intellectual snobs ask: what is a rugby league man doing at Cambridge University? Well, the most interesting course I studied is very relevant. It was: “Winning Hearts and Minds, Propaganda in World War II.”

Japanese propaganda interested me most because I grew up on the north coast of NSW in the immediate post-war period.

We heard stories of American soldiers on leave involved romantically with the wives and girlfriends of Australians fighting in the Pacific.

Although it rated only a par in the Courier-Mail in November 1942, we later learnt of the “Battle of Brisbane” when 4000 troops of both the Australian and American armies fought over two nights in the CBD.

So, when the Cambridge lecturer showed a Japanese wartime poster of an Australian soldier and an American officer, I was particularly interested.

The Australian private, with slouch hat, was drawn standing on a map of Papua New Guinea in the top left corner of the poster while the well-dressed American officer was carrying an attractive girl over his shoulder.

The digger is shouting, “Hey, what are you doing with my girl?” while the American is telling the young lady, “Stop kicking, girlie. I’ll deal with him after the war.”

Based on what I heard growing up, the Japanese propaganda was credible, unlike, say, the Italians, who pictured Churchill and Roosevelt as Mafia-like gangsters.

So what is the relevance of this to rugby league? Reading the media reports from Australia, I could de-code the background and reflect on the unholy alliance which exists in sport between agents and journalists.

When a player manager refuses to answer a journalist’s questions about a client, it opens up opportunities for a rival player manager.

The rival manager, who has a client at the same club, tells the journalist some piece of information with the purpose of destabilising his opposite, while potentially damaging the relationship between the two teammates.

Just as the bonds which united Australians and Americans in World War II were undermined by Japanese propaganda, so are the ties between players of the same club sometimes loosened by agents.

One young media star recently went on radio ridiculing a rumour which was being increasingly believed. His denial was vehement. Shortly after came a text from a player manager: “Thanks mate, just what we needed.”

Weeks later, the rumour was confirmed.

Player managers have played a major role in the coaching carousel. The agents who act for both players and coaches have enormous influence. An agent convinces a club to hire his coach and then encourages the coach to recruit as many of his players as possible.

It becomes a win-win for all. The agent receives lucrative commissions and unimpeded access to the club; the players receive good contracts and the coach never loses the dressing room.

When I ask coaches or players why they have engaged a certain agent, the response is usually the same: “He gets me a better contract than I thought I’d get.”

Yes, but someone always misses out. The NRL has a salary cap and will soon have a ceiling on football department spending, which captures payments to coaches.

Football clubs report cases of an agent with a high-profile client (X) and a lesser one (Y), saying, “Give X big money and Y what you can afford.”

Client X then proceeds to recruit more players for the agent.

Some agents have player lists so long, they don’t recognise their own clients. Furthermore, they tend to make contact with club officials and clients on the eve of signature games, sometimes destabilising the player with contract updates.

Fortunately, most players have an in-built radar which detects duplicity and deceit and, because they genuinely like each other, it means the bonds which tie them together withstand the forces seeking to pull them apart.

Storm captain Cameron Smith demonstrated this at his testimonial lunch when he singled out two great friends and teammates in Billy Slater and Ryan Hoffman.

Similarly, the US and Australia military alliance has endured, despite the distractions of the secret agents in World War II.