DECLAN RICE could have his work cut out winning over Manchester United fans if he joins them this summer – after cheekily liking an image of a trio Liverpool legends at Old Trafford last night. 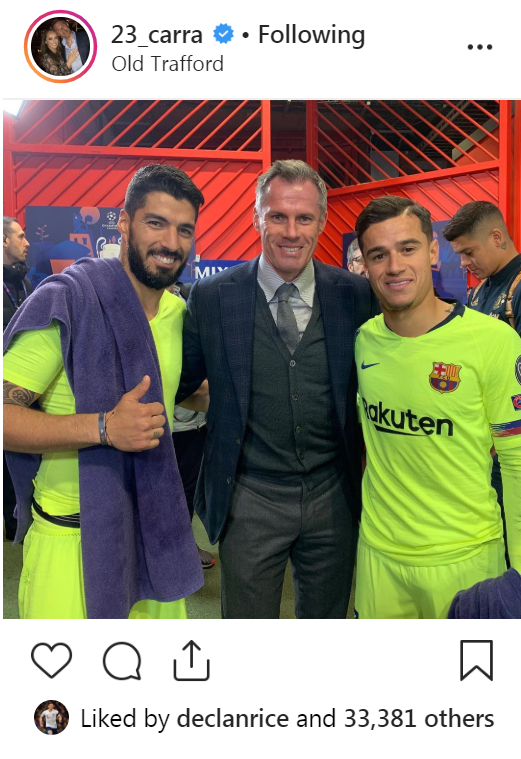 Former Liverpool forward Suarez had a hand in the goal as his header touched of left-back Luke Shaw to give the Spanish side a crucial lead ahead of next Tuesday's second leg.

After the game Anfield legend Jamie Carragher, 41,  shared a picture with his former team-mates as the trio enjoyed a win over arch rivals United.

But 20-year-old United target Rice liked the Instagram post, which means he could have some making up to do with Old Trafford supporters if he is to make the switch.

SunSport exclusively revealed Ole Gunnar Solskjaer has targeted West Ham star Rice and will swoop for the £40million midfielder in the summer.

Solskjaer has told executive vice-chairman Ed Woodward that English players are his priority.

Rice and £80m Sancho are his top targets along with either £40m Crystal Palace right-back Aaron Wan-Bissaka or £50m Leicester centre-back Harry Maguire.

United will have to battle neighbours Man City in the race for Rice, with Pep Guardiola eyeing the Enlglishman as a replacement for Fernandinho.