Soccer is a roller-coaster.

Rugged defender Milos Degenek could be forgiven for feeling glum after the World Cup in Russia.

He had been a frequent starter during the qualifying campaign under former Socceroos boss Ange Postecoglou, but fell out of favour when temporary boss Bert van Marwijk took over.

The Serbian-born, Sydney-raised centre-back didn't get a minute of game time.

But just two months later the 24-year-old is on top of the world. 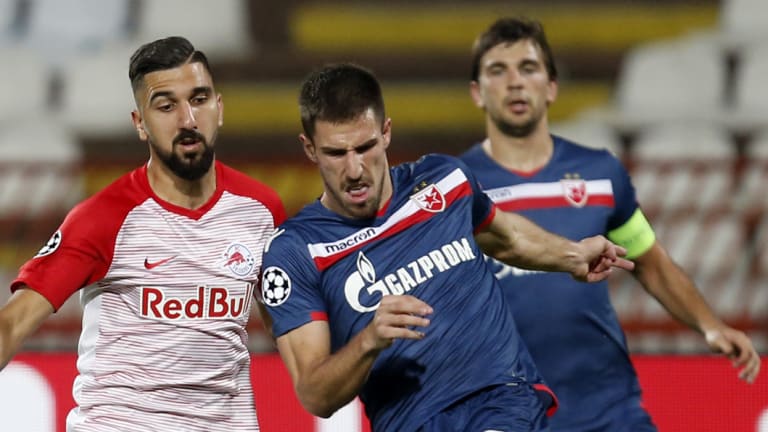 Not only has he sealed a dream move to the club he supported – Red Star Belgrade – as a child in his war-torn country, he has emerged as an unlikely hero in their dramatic qualification for the Champions League.

The eastern Europeans looked to be on the way out of the Champions League last week when they trailed Red Bull Salzburg 2-0 in Austria in the second leg of a final qualifier having drawn the first match 0-0 in Serbia.

Up stepped Degenek, who provided assists for teammate El Fardou Ben Mohammed to score twice to make the aggregate score 2-2 and send the Seerbian side through on the away goals rule.

Cue bedlam in Belgrade and mass emotion on the pitch, from the Red Star players, and in the stands, where Degenek's brother and parents were looking on proudly as their son played a crucial role in an improbable triumph.

It was a win that puts Red Star – once one of the biggest names in European soccer  – back amongst the game's elite and restores some pride to Serbian club football.

"Its something that you don't get often as a central defender. To have two assists, it's really amazing," he said in a hook up from the Socceroos camp in Turkey.

''Its really a dream come true. As I grew up in Australia it's always been the club that me and my family supported.

"When we moved to Australia it was the one club everyone knew and supported.

"We continued to support them. Even in the tough years of struggling for Serb football we always loved that club, and for me to join that club and to help the club make the Champions League is something that's phenomenal. It's really exciting to be down there at the moment.''

Now he will face the likes of Mo Salah and Roberto Firmino, Edinson Cavani and Neymar and Dries Mertens and Lorenzo Insigne when Red Star take on respectively Liverpool, Paris St Germain and Napoli in the Champions League group stage.

"To play against these top clubs and test ourselves against them is amazing," says Degenek.

He was playing for Postecoglou's J-League team Yokohama Marinos but he went home to Serbia to catch up with family and friends after his frustrating time in Russia. When Red Star made their interest clear he didn't think twice.

"After the World Cup I went to Serbia to be with family. I had the option [to go to Red Star] without thinking too much. I spoke to Ange in Japan and he understood that I wanted to come back to Europe and it was a big club that was interested in me.

"It's a club that I have always dreamt of playing for. But now that we have made the Champions League it's a big club in European football again as well.

"They were after me for a long time, I had contact with people at the club for a year and a half."