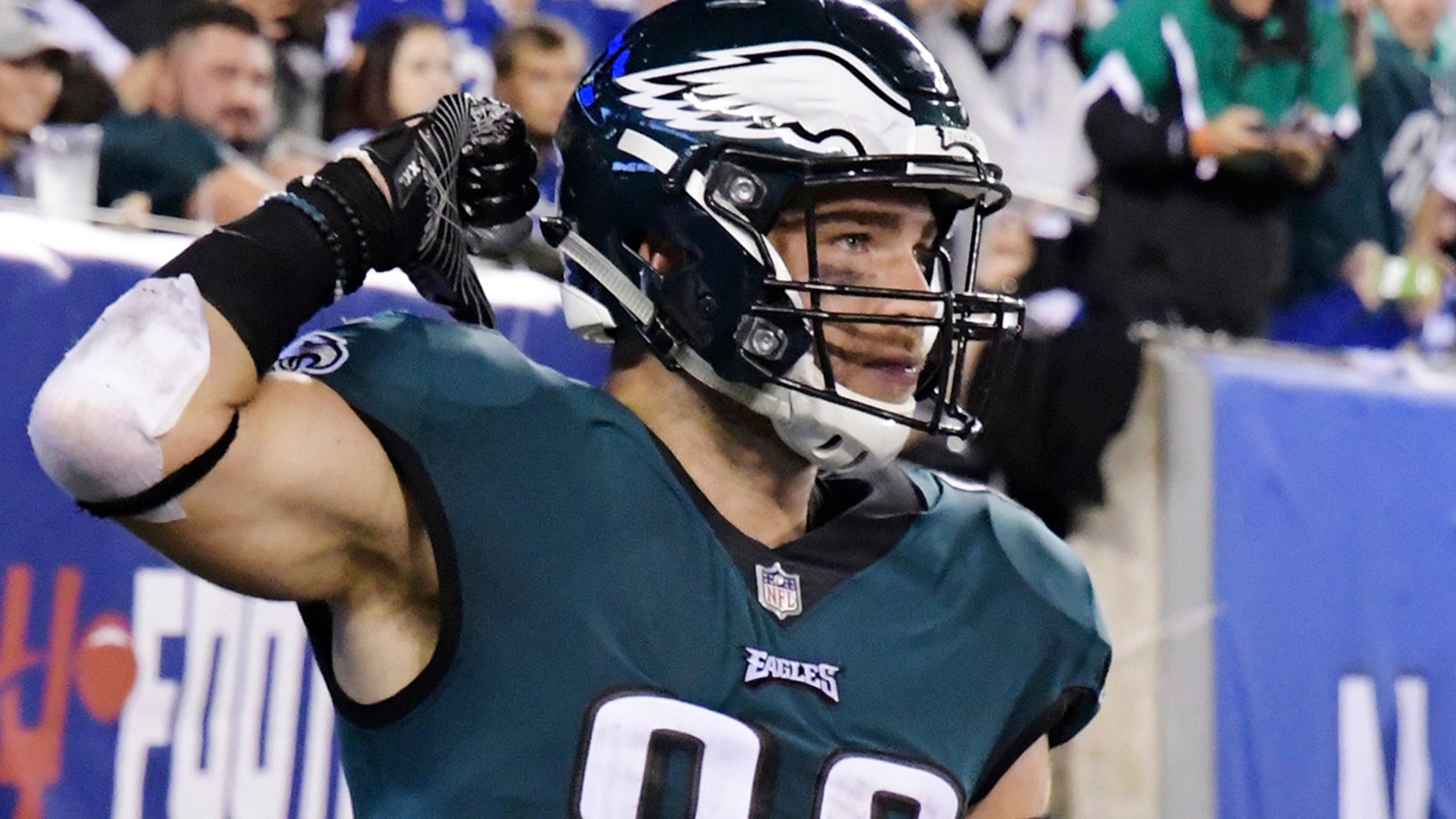 Philadelphia Eagles’ Zach Ertz celebrates after catching a pass for a touchdown during the first half of the team’s NFL football game against the New York Giants in East Rutherford, N.J., Oct. 11, 2018.

EAST RUTHERFORD, N.J. — All the Philadelphia Eagles needed to get over their Super Bowl hangover was a little more urgency, some big plays — and a timely game against the New York Giants.

Carson Wentz threw a season-high three touchdown passes and the Eagles got an early lift from their defense and special teams in beating the struggling Giants 34-13 on Thursday night, avoiding their first three-game losing streak since the 2016 season.

Wentz sandwiched touchdowns passes of 13 and 1 yard to Alshon Jeffery around a 10-yarder to tight end Zach Ertz to help the Eagles (3-3) build a 31-6 lead. They beat the Giants (1-5) for the fourth straight time and seventh in eight games.

Corey Clement scored on a 1-yard run and Jake Elliott added field goals of 33 and 30 yards for the defending Super Bowl champions.

Rookie halfback Saquon Barkley scored on a 50-yard run and rushed for 130 yards in one of the few bright spots for the Giants' offense, which was booed repeatedly in losing at home for the third time. Aldrick Rosas had field goals of 33 and 21 yards.

This was seen as a must-win game for both teams in the weak and wide-open NFC East, and the Eagles went out and grabbed it.

They came into the game having scored seven points in the first quarter and they doubled that against New York.

Eli Manning was under pressure all game and finished 24 of 43 for 281 yards.

On the opening series, Kamu Gugier-Hill intercepted Manning's pass that was tipped by fellow linebacker Jordan Hicks and he returned it to Giants 16. Three plays later, Wentz (26 of 36 for 278 yards and no interceptions) was forced out of the pocket and found Jeffery after getting all day to throw.

A 46-yard run by Barkley set up Rosas' 33-yarder to cut the gap to 7-3, but the Eagles took control later in the quarter after DeAndre Carter returned a punt 23 yards to the New York 44. Passes of 17 to Jeffery and 14 to Clement set up Clement's touchdown run. 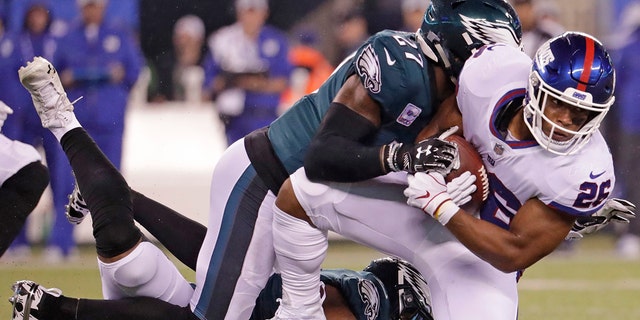 New York Giants running back Saquon Barkley (26) is tackled by Philadelphia Eagles’ Malcolm Jenkins (27) during the first half of an NFL football game in East Rutherford, N.J., Oct. 11, 2018.

A spectacular tackle-breaking run by Barkley on a 55-yard screen pass helped cut the lead to 14-6 in the second quarter but Wentz hit a wide-open Nelson Agholer on a third and 3 and connected with Ertz for a 21-6 lead on the next play.

Elliott made it 24-6 just before halftime and Philadelphia put the game out of reach with a 75-yard drive that ended with a short Jeffery TD catch.

The only thing meaningful after that was Barkley's touchdown run.