Earlier this year, I was delighted when Aliir debuted for the AFL team I support, the Sydney Swans. Now 22, Aliir is one of the first Sudanese immigrants to play AFL and has become a role model in our multicultural nation.

There is a real concern about Sudanese gangs … you’d have to be walking around with your hands over your ears in Melbourne not to hear it.

The most culturally powerful moment in the AFL this season came just two days before the Prime Minister suggested that Melburnians were fearful of Sudanese gangs.

The contest between Sydney’s Aliir Aliir and North Melbourne’s Majak Daw on Sunday, July 15, demonstrated how football can bridge divides and shift public perceptions at a time when a minority group — in this case, the African and especially Sudanese people of Melbourne – are in the cross-hairs.

If the timing of Aliir v Daw was exquisite, the athletic and football prowess of the Sudanese-Australian pair elevated their duel to something that went beyond the game. Daw, who hitherto had played mainly in defence this year, was redeployed as a forward and booted 4.2 in one of his best games for the Roos, while Aliir grabbed 10 marks and poetically kicked the match-winning goal in one of 2018’s most spectacular games.

But the contest was far more than a novelty about two players from Sudanese backgrounds (Aliir was born in a Kenyan refugee camp). The deeper story was that, amid fevered fears about African gangs, a pair of footballers were showing – before our eyes – the two-way assimilation process.

Aliir and Daw were immersed in this most Australian of sports, while the large cross-section of footy fans were seeing young Sudanese men – the very people we’d been told to fear – in a completely different light. 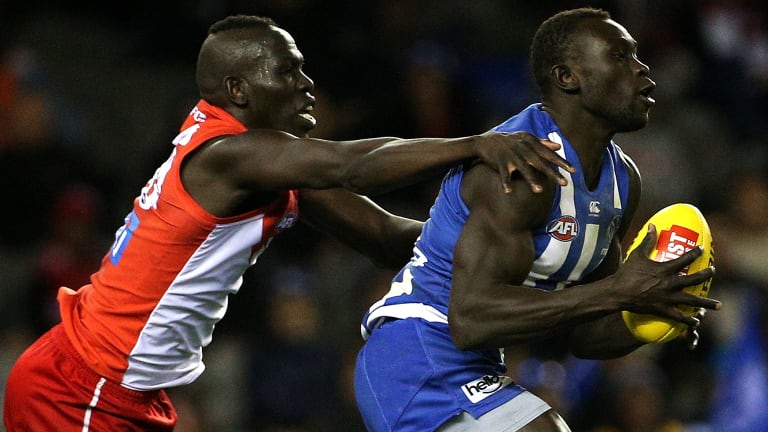 Critically, Aliir v Daw was spontaneous. It wasn’t scripted by SBS producers or a multicultural lobbyist. It was an organic happening that grew from each team’s particular needs on that particular afternoon. As they mingled post-match, Daw and Aliir just seemed like a typical pair of Aussie footballers who knew one another.

Now, I wonder what Aliir would make of the Prime Minister’s comments about the Sudanese gangs — widely viewed as politically motivated — given that the PM had called Aliir before his speech to the UN and used Aliir’s uplifting backstory to promote the idea that Australia is succeeding in assimilating refugees.

It’s worth noting, too, that Turnbull’s opponent, Bill Shorten – a Victorian who doesn’t mind a nice footy photo op – was conspicuous for his absence during this discussion of African gangs.
There are plenty of people who believe that footy shouldn’t be promoting multiculturalism, that clubs are best to stick to handball drills and finding competent players, especially if they’re not winning games.

The Western Bulldogs think otherwise. Last weekend, they hosted the African-themed Ujamaa Community Festival (‘‘Ujamaa’’ means ‘‘extended family’’ in Swahili) as part of their strategy of fostering ties with the African community; the club’s foundation also has just launched a program in which Bulldog players will mentor kids from African backgrounds in the western suburbs.

Embraced by local African community leaders, ‘‘Ujamaa’’ wasn’t universally accepted. The club received some flagrantly racist feedback on social media, while others questioned – without using racist language – why the club felt the need to single out Africans as a group for inclusion and celebration.

Bulldogs president Peter Gordon argues that not only can footy and the AFL improve the relationship between African-Australians and the rest, but that the game has already done much to bridge racial-social divides.

Gordon says he and the club did some research on the African gang situation and concluded: ‘‘The problem is vastly exaggerated, because of how they [African youths] look.’’ 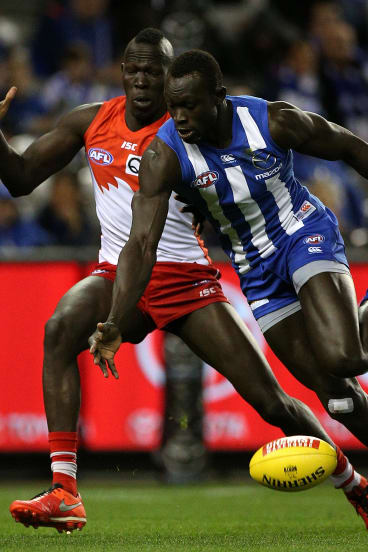 Gordon vowed, too, that the club board would soon dine at a restaurant in the territory where locals are supposedly fearful of going out. ‘‘My board are going to make a point in the next weeks of going out for a meal … in Taylors Hill or Tarneit.’’

Right now, there aren’t many Sudanese or players from other African nations in the system. But consider the cultural impact – and the potential to shift attitudes – if there were, say, 20-30 footballers from the Sudan et al, spread across the 18 clubs.

Despite the booing of Adam Goodes – an unpleasant counterpoint to the Aliir v Daw moment – and of welfare concerns raised by Indigenous past players lately, there’s a strong case that footy has played a role in improving the forever troubled relations between Indigenous and non-Indigenous Australia. Gordon says there’s ‘‘no doubt’’ that the game has helped, as the proportion of Indigenous players in the competition nudges 10 per cent.

‘‘I’m pretty confident there will be many Majak Daws, Aliir Aliirs and [Bulldogs VFL player] Reuben Williams coming through the ranks,’’ Gordon predicted.

Some readers of conservative hue may find the concept of footy as a vehicle for inclusion irritating, as yet another case of AFL overreach into political correctness – or as a cynical grab for corporate-government dollars.

Yet, there’s something quite old-school Australian – conservative even – about seeking out kids from a non-English-speaking background who’ve arrived on our shores, and encouraging them to kick a footy or pick up a cricket ball, as a means of making immigrants feel a little less ‘‘them’’ and a little more ‘‘us’’.